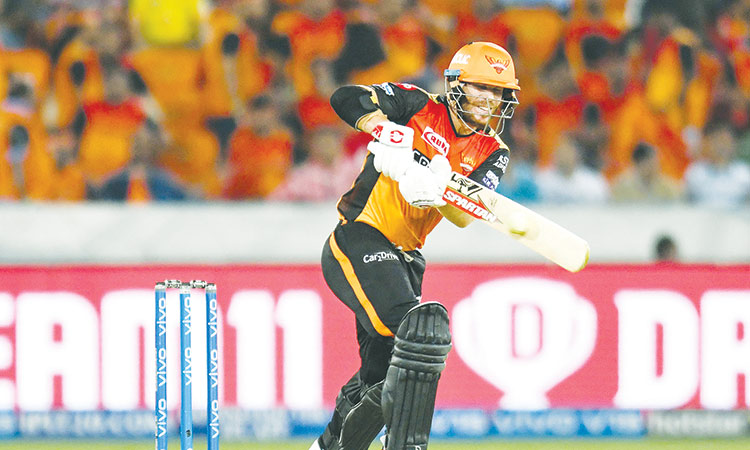 SRH’s David Warner plays a shot against KXIP during their IPL match in Hyderabad on Monday. Agence France-Presse

Batting first, Hyderabad posted 212/6 in 20 overs whereas in reply Punjab could reach 167 for the loss eight wickets.

Earlier, Warner notched up his eighth half-century of the season to end his IPL campaign this season in style.

Warner, who is by far the tournament’s highest scorer, smashed a typically belligerent 81 off 56 balls, his innings laced with seven fours and two sixes.

For the visitors, Ashwin (2/30) was the pick of the bowlers as Mujeeb Ur Rahman, returning to the team, was taken for 66 runs in his four overs, including one in which the Afghanistan spinner leaked 26 runs, the most expensive spell of bowling this IPL.

Since Warner was dismissed, Punjab in a bit with a flurry of wickets but still could not stop

It was a dream start for the orange army as they raced to 53/0 in four overs, and then 77/0 after Powerplay, both scores the fastest this season.

Warner and Saha shared a 76-run opening wicket stand before the India Test wicketkeeper under edged a delivery by M Ashwin to Simran Singh behind the stumps.

Pandey and Warner continued the carnage, combining for a 82-run stand for the second wicket. Just when it looked like they would post a score well past 200, R. Ashwin snared two wickets in the 16th over, first removing Pandey and then accounting for Warner.

While Pandey was taken at short fine leg by Mohammed Shami, Warner was taken at point by Mujeeb after Ashwin came round the wicket.

Skipper Kane Williamson scored a quickfire 7-ball 14 but could not continue in the same vein as Kings XI managed to do some damage control with Shami taking two wickets, including Williamson’s, in the 19th over and Arshdeep Singh getting the back of Rashid Khan (1) in the last over.

Both teams made three changes to the team from their previous outings.

Meanwhile, Delhi Capitals have finally qualified for the playoffs. Their 16-run win over Royal Challengers Bangalore on Sunday sealed their place in the knockout stages of the tournament. Delhi last made it to the playoffs in 2012 under Virender Sehwag’s leadership.

Having failed to rise to the challenges of the cash-rich league in the last few seasons, Delhi have finally turned the tables this season and are sitting pretty with 16 points from 12 games. The remaining two matches will be all about maintaining supremacy and finishing the group stages on a high. After all, a top-two finish will mean that DC get two bites at the cherry in the playoffs.

Even as people have spoken about the balanced approach in this Delhi outfit and the leadership group which has been bolstered by the addition of former India skipper Sourav Ganguly as the advisor, it is the job of the senior boys to go out and show the way to the young turks on the field of play. And the man who has done that with panache this season for DC is Shikhar Dhawan.

While everyone has been talking about Kolkata Knight Riders all-rounder Andre Russell and Mumbai Indians all-rounder Hardik Pandya’s power hitting this season, Dhawan has quietly moved to number three in the run-getters’ list with 451 runs from 12 games. A slightly lower strike-rate of 137.08 is justified by the fact that DC batsmen have had to cope with the low and slow tracks at the Feroz Shah Kotla.