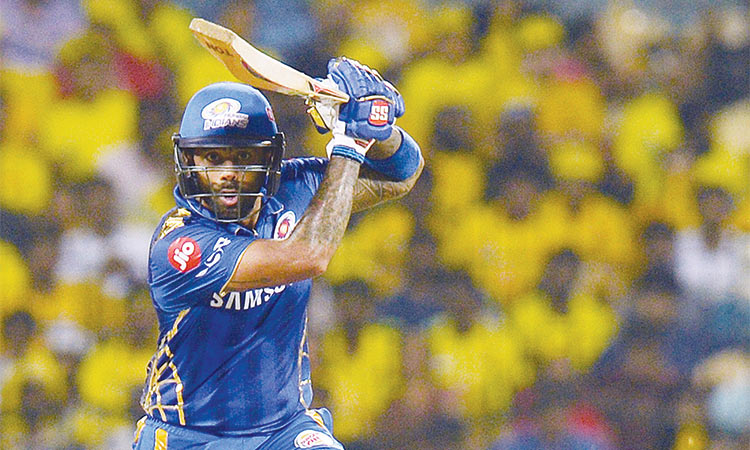 Suryakumar Yadav smacked a blistering unbeaten 54-ball 71 to propel Mumbai Indians into the final of the Indian Premier League (IPL) with a convincing six-wicket victory against Chennai Super Kings in the Qualifier 1 on Tuesday.

After restricting Chennai to a paltry 131/4, Mumbai knocked down the winning run for the loss of four wickets with nine balls to spare.

With the win, they became the first team to book their berth in the final.

Despite losing their top order for just 65 runs, it was Dhoni and Rayudu who anchored the Chennai innings. However, a slow Chennai wicket didn’t let the home side reach a challenging total against the three-time IPL champions.

For Mumbai, Rahul Chahar starred with the ball with figures of 2/14 from his four overs while Krunal Pandya and Jayant Yadav bagged a wicket each.

Opting to bat first, the defending champions got off to a slow start with just 6 runs on the scorecard in the first two overs before Rahul came up with the first breakthrough, dismissing Faf du Plessis (6 off 11) in the first ball of the third over.

Incoming batsman and Chennai’s most dependable batsman Suresh Raina also couldn’t do much as he also departed cheaply after being caught and bowled by Jayant Yadav. Things worsened for the home side when Krunal packed back Shane Watson (10 off 13), with Chennai reeling at 32/3 in 6 overs. Murli Vijay (26 off 26) and Rayudu then tried to put things back in order as they added 33 runs for the fourth wicket before the former became a victim of Chahar in the 13th over.

New batsman Dhoni then joined Rayudu in the middle and the duo denied Mumbai any further inroads as they shared a 66-run partnership to take Chennai to 131, thanks to the Chennai skipper’s couple of lusty blows off Lasith Malinga in the second last over.

Meanwhile, an Indian Premier League umpire has been reported to the national body for allegedly kicking a door after an altercation with Royal Challengers Bangalore skipper Virat Kohli, a press report said on Tuesday.

Englishman Nigel Llong’s on-pitch argument with Kohli, who is also the Indian captain, was just the latest in a string of heated exchanges between players and umpires in this edition of the T20 extravaganza.

Llong, 50, who is due to umpire the IPL final on Sunday, called out Bangalore paceman Umesh Yadav for a no-ball in a May 4 match against Sunrisers Hyderabad but replays suggested the bowler’s back foot was behind the line.

Kohli and Yadav protested the call, made in the final over of the Hyderabad innings, but Llong stood by his decision. Umpires withdrawing a no-ball call is extremely rare.

Llong, who is on the International Cricket Council’s Elite Panel of umpires, then vented his anger by kicking the door of the umpires’ room at Bangalore’s M. Chinnaswamy Stadium, according to the Times of India newspaper.

The newspaper said that Llong paid 5,500 rupees ($72) in compensation for the damage but the state association has decided to report the incident to the sport’s national body, the BCCI.

“It was an unfortunate incident. As a state association we are duty bound to report it and we are writing to the CoA (Committee of Administrators),” a state official was quoted as saying.