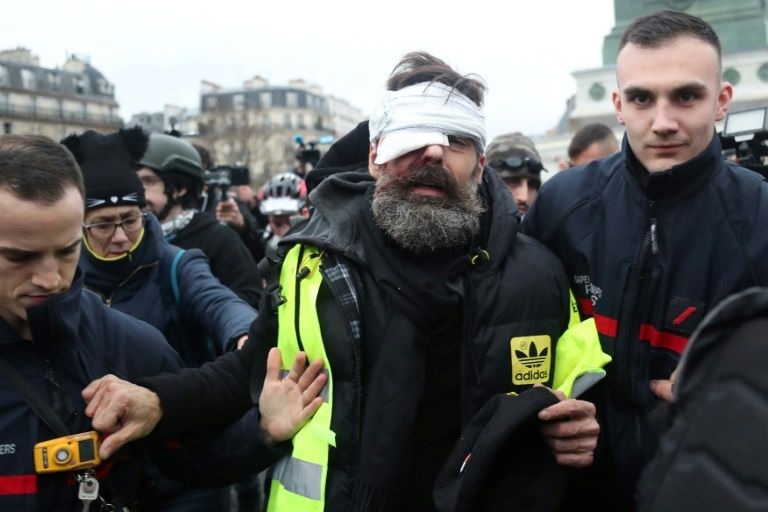 Jerome Rodrigues, who has become a well-known figure in the "yellow vest" movement with 50,000 followers on Facebook, was live-streaming the protest on the website when he was hit. - AFP

Paris: A prominent French anti-government "yellow vest" activist, badly injured in the eye at a protest, was struck with one of the controversial rubber bullets used by police, his lawyer said Sunday.

Jerome Rodrigues' lawyer fears he will be "handicapped for life" after he was injured in clashes with police in Paris on Saturday during an 11th straight weekend of protests against President Emmanuel Macron.

Rodrigues, a 40-year-old construction worker, was placed in an artificial coma overnight after the incident at the Bastille monument in central Paris.

"He is in shock. He will be handicapped for life. It is a tragedy for him and his family," lawyer Philippe de Veulle told BFM television, adding that he was lodging a complaint against police.

The bearded Rodrigues, who has become a well-known figure in the "yellow vest" movement with 50,000 followers on Facebook, was live-streaming the protest on the website when he was hit.

The devices -- which are not used in most European countries -- have become deeply controversial in France since the protests began in November, blamed for dozens of serious injuries.

On Saturday, police using the bullets were for the first time deployed wearing body cams in a bid to increase transparency.

Rodrigues, speaking to LCI television from hospital, said he was also hit by a stingball grenade, another controversial riot control device.

"Everything happened very quickly. They threw a grenade at me and I took a (rubber) bullet. I was attacked twice -- a grenade to the foot, and the bullet," Rodrigues said.

Rodrigues' lawyer insisted he was not one of the "hooligans" who have been joining the weekly protests to cause trouble for police.

In the video, Rodrigues can be heard several times warning protesters to leave the Bastille area because hard-left "black bloc" agitators were coming to attack the police.

Witnesses picked up the projectile that struck Rodrigues and police are set to investigate the circumstances of the incident.

Originally sparked by rises in fuel taxes, the "yellow vest" protests quickly snowballed into a widespread revolt over accusations that Macron, an ex-banker, is out of touch with rural and small-town France.

Named after the emblematic luminous road safety vests worn by protesters, the demonstrations have drawn tens of thousands of people to the streets.

But their numbers have eased in recent weeks after Macron announced a series of policy climbdowns and launched a two-month consultation to allow people to vent their anger.

The interior ministry estimated that 69,000 turned out across France on Saturday, compared with 84,000 a week earlier.

On Sunday, several thousand people turned out for a march through central Paris against violence at the "yellow vest" protests and in defence of French republican values.

Dubbed the "red scarf" movement, the initiative is the brainchild of an engineer from Toulouse horrified by attacks by "yellow vests" against police and journalists.

"Yes to democracy, no to revolution," the protesters chanted, some carrying French and European Union flags.