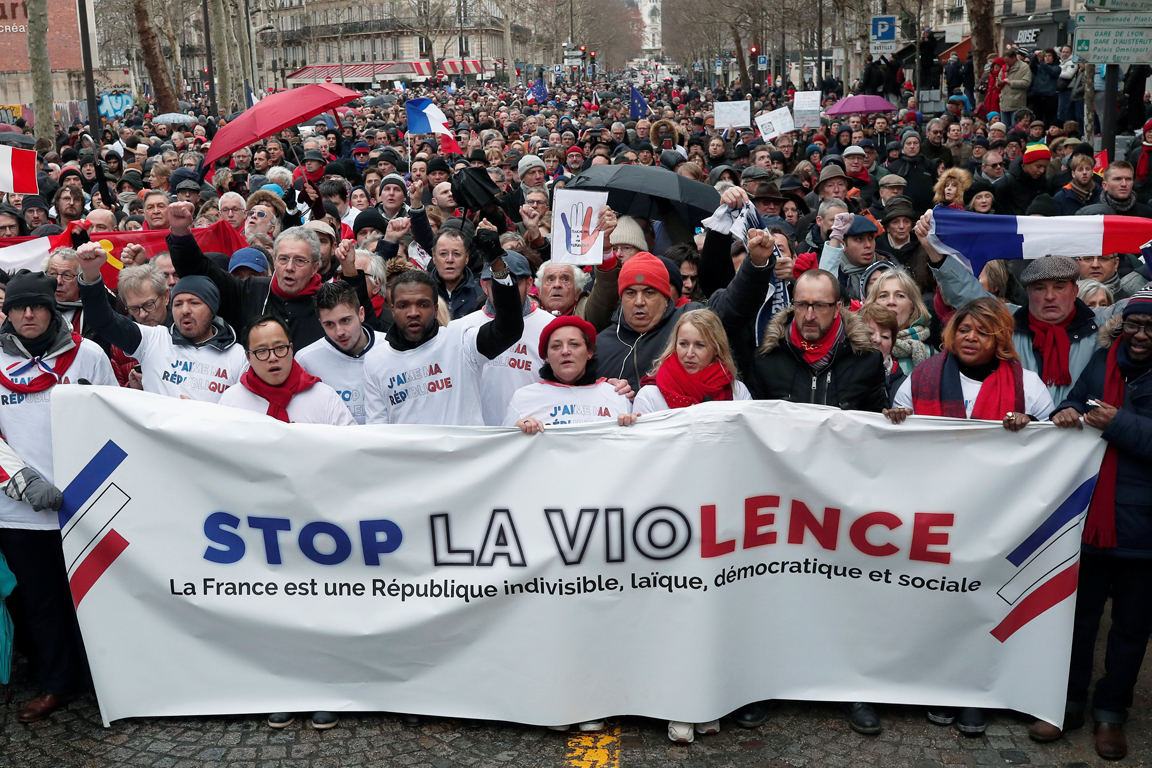 PARIS: More than 10,000 people wearing red scarves marched through Paris on Sunday in protest at "Yellow vest" violence during the anti-government demos that have drawn tens of thousands of people to the streets over the past 11 weeks.

Since mid-November President Emmanuel Macron has offered concessions and debates seeking to quell the weekly rallies that often end in violent clashes with police in the most serious challenge yet to his government.

In Sunday's rival protest, the crowds marched in rain from the Place de la Nation square to the Bastille monument, some chanting "Yes to democracy, no to revolution" as they waved French and European Union flags.

Dubbed the "red scarf" movement, the centrist initiative is the brainchild of an engineer from Toulouse who was horrified by the violence seen among more extremist "Yellow vest" demonstrators.

Many protesters joining the rally said they were not against "Yellow vest" demands for greater help for France's poor, but were sick of the clashes and destruction that have marked protests for 11 consecutive Saturdays since mid-November.

Laurent Soulie, an organiser of the march, said the protesters responded to a call to the "silent majority who have remained holed up at home for 10 weeks."

A nursing manager who gave her name as Marie-Line said she believed the Yellow vests had just cause to "grumble", but came "to say that this verbal and physical violence must stop".

"It's not a protest against the Yellow vests -- it's a protest to say, you've made your demands, we are listening to them," Francois Patriat, a senator from Macron's centrist party, told AFP at the demonstration.

"There are other places to discuss this than the street. You cannot block the country and economy because you consider the president to be illegitimate."

Sunday's protest was almost double the size of the "Yellow vest" demonstration in Paris a day earlier, when some 4,000 people came out to rail against Macron.

The protesters are named after the luminous road safety vests that they wear.