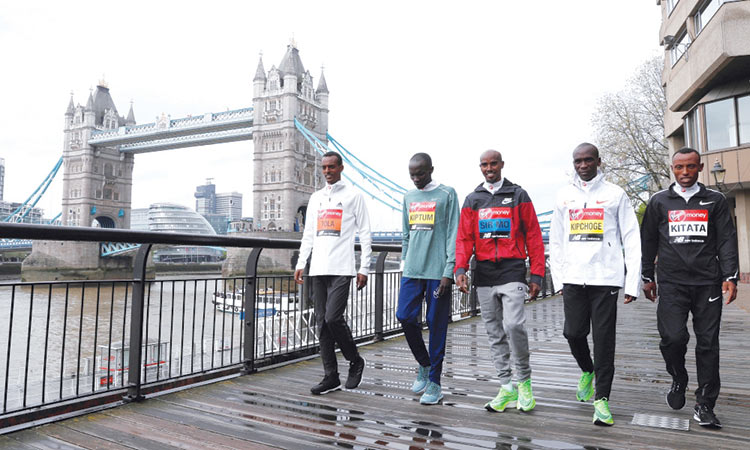 Athletics icons Mo Farah and Haile Gebrselassie are locked in an escalating dispute just days away from the London Marathon with claims of robbery and an alleged assault at the heart of the row.

Britain’s quadruple Olympic champion Farah, aiming to win Sunday’s race, went public at his pre-marathon press conference with claims Gebrselassie had made no effort to recover items stolen from his room at the Ethiopian’s hotel near Addis Ababa.

Farah was staying at the hotel in late March as part of training for Sunday’s prestigious race.

Gebrselassie -- a two-time Olympic champion -- hit back by accusing Farah of not paying his heavily discounted hotel bill and told The Guardian on Thursday Farah had been seen by several people punching and kicking a husband and his wife in the gym.

“Farah said to him (the husband): ‘Why are you following me?’”

Gebrselassie told the Guardian, adding that the man had been copying Farah’s exercise routine.

“The guy said he wasn’t -- and that he was just doing his work.

“Immediately Farah punched them and kicked them by foot. Especially the husband. There were lots of witnesses.” Farah’s camp denied the allegations.

“There was an incident at the gym a number of weeks ago, at which Haile was not present but it was categorically not of Mo’s making,” a source close to Farah told     The Guardian.

“He immediately raised a complaint to the highest level within the police force.

“The individuals concerned were warned that any further threatening behaviour towards Mo would result in police action.”

For his part Gebrselassie maintained that it was only thanks to his personal intervention police dropped an assault case against Farah.

The dispute was escalating as Farah was engaged in hardly ideal preparations for taking on world record holder and defending champion Eliud Kipchoge in Sunday’s marathon.

He had also earlier strongly dismissed Gebrselassie’s assault accusations, saying they were an effort to “distract from the situation, where members of his hotel staff used a room key and stole money and items from Mo Farah’s room”.

“Someone’s got the key from reception, opened it up, took my money, took my nice watch that my wife got me, and two phones,” said Farah.

“The watch was sentimental -- it can’t be replaced.”

Farah, who finished third in last year’s race but has since set a new European record in landing the prestigious Chicago Marathon, also revealed the contents of a text message he sent Gebrselassie when he lost patience at not having his pleas for help answered.

“I want to inform you that I’m disappointed you have not made any effort to find my stolen money, and especially my watch,” the text read.

“I have tried to contact you by telephone several times.

“Know that I am not responsible for what I say during the press conference in London and what influence it will have on your personality and your business. Greetings, Sir (he has been ennobled by Queen Elizabeth II) Mo.” Gebrselassie, who also won four outdoor world titles in his illustrious career, hit back claiming the text message looked like “an act of blackmailing and accusation” and added there had been “multiple reports of disgraceful conduct” at the hotel levelled against Farah and his entourage.

Gebrselassie denied the alleged robbery had been taken lightly, saying that five hotel staff were held in custody for three weeks while it was investigated.

“They were later released by legal bodies after they were found clear,” said Gebrselassie. It appears that the case has escalated to such an extent that the two athletics greats could end up in court.