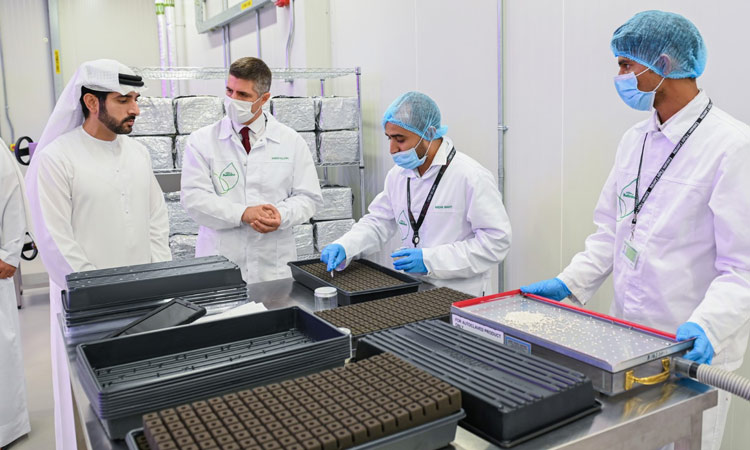 Experts brief Sheikh Hamdan during his visit to Bustanica in Dubai.

Sheikh Hamdan Bin Mohammed Bin Rashid Al Maktoum, Crown Prince of Dubai and Chairman of Dubai Executive Council, said Dubai remains committed to maintaining the highest levels of food security with one of the world’s most comprehensive plans to address this vital issue.

"Under the guidance of His Highness Sheikh Mohammed Bin Rashid Al Maktoum, Vice President, Prime Minister and Ruler of Dubai, we will continue launching new initiatives that apply modern farming techniques to accelerate self-sufficiency in fresh food produce and support sustainability, which is a top priority for us," said Sheikh Hamdan.

"The Dubai Food Security Committee constantly reviews current opportunities and challenges within the national food security strategy framework. Our plans for enhancing self-sufficiency in the agricultural sector by supporting the use of technologies and applied research in food processing and agriculture are focused on meeting the current and future needs of Dubai’s citizens and residents," he added.

He made the comments during a tour of Bustanica, the world’s largest vertical farm that recently opened in Dubai. Accompanying him were Adel Ahmad Al Redha, Chief Operating Officer, Emirates Airline; Mansoor Falaknaz, Member of the Board of Directors, Bustanica; and Robert Fellows, Production Director, Bustanica.

"We are fully confident in the ability of our youth and institutions to continue delivering innovative projects that accelerate the pace of development and achieve optimum results in strategic sectors," he said, adding that Dubai will continue to pursue innovative ways to further strengthen the emirate’s resilience and food sustainability irrespective of the global environment.

During the tour, Sheikh Hamdan was briefed on the innovative technologies used in the state-of-the-art hydroponic farm. The Bustanica facility has been developed by Emirates Crop One, a joint venture between Emirates Flight Catering, one of the world’s largest catering operations serving more than 100 airlines, and Crop One, an industry leader in technology-driven indoor vertical farming. Backed by an investment of US$40 million, the world’s largest hydroponic farm is spread over 330,000 square feet.

Sheikh Hamdan commended the Emirates Group’s initiatives to constantly raise the bar of excellence in the aviation sector. Under the leadership of H.H. Sheikh Ahmed bin Saeed Al Maktoum, Chairman and Chief Executive of Emirates Airline and Group, Emirates has evolved as a key player shaping the industry’s growth and future, Sheikh Hamdan said. The Emirates Group’s robust business foundations built on farsighted investments in people, technology and infrastructure place it in a strong position to make even more significant contributions to the economy in the coming years, he added.

Located near Al Maktoum International Airport at Dubai World Central, the newly opened vertical hydroponic farm in Dubai is geared to produce more than 1,000,000 kilogrammes (kg) of high-quality leafy greens annually while requiring 95 percent less water than conventional agriculture. At any point in time, the facility grows more than one million plants that provide an output of 3,000 kg per day.