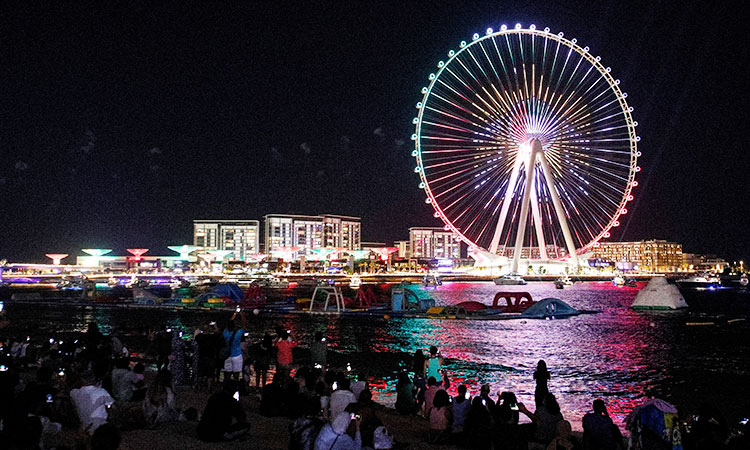 A general view of the opening ceremony of Ain Dubai wheel on Thursday night. Reuters

Sheikh Ahmed was accompanied at the opening by Mohamed Hadi Al Hussaini, Minister of State for Financial Affairs. The landmark project is the latest addition to Dubai Holding’s diverse entertainment portfolio.

Speaking on the occasion, Sheikh Ahmed Bin Mohammed emphasised Dubai's continued commitment to developing the emirate’s offerings as a tourism and lifestyle destination and enriching the quality of life of people who live in Dubai. The unique experiences offered to visitors by the attraction, located in the heart of the lifestyle island destination Bluewaters, reflect the emirate’s aspiration to achieve the highest excellence in all sectors and spheres of life, he added. 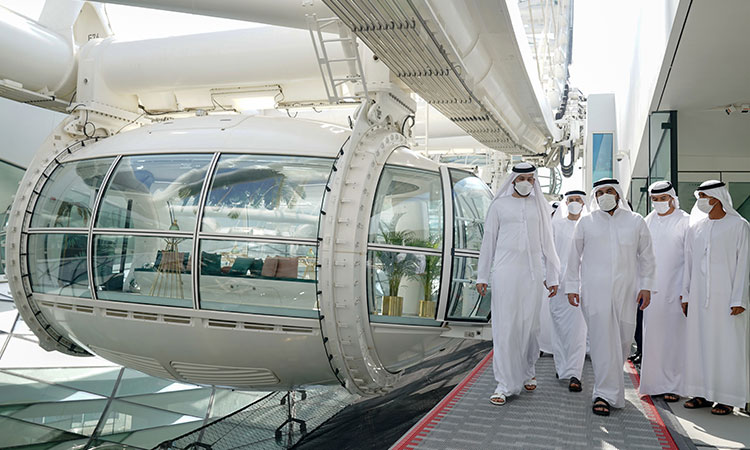 Sheikh Ahmed was welcomed by Amit Kaushal, Dubai Holding Chief Executive Officer, and key senior representatives from the Group. During the opening, which was also attended by Helal Saeed Al Marri, Director General of Dubai’s Department of Tourism and Commerce Marketing (DTCM) and Dawoud Al Hajri, Director General of Dubai Municipality, Sheikh Ahmed was briefed on the key features of the new entertainment destination. 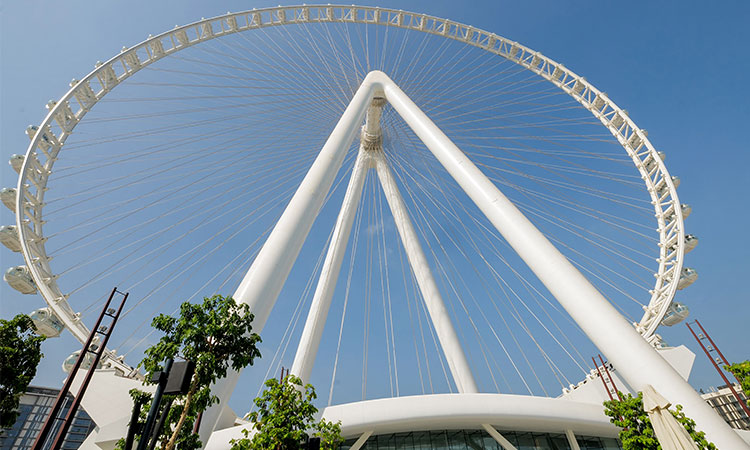 He also watched a short film documenting various phases of the construction of the observation wheel, which took nine million man-hours to build.

Sheikh Ahmed was introduced to the observation cabins of Ain Dubai, which provide visitors the perfect vantage point for 360-degree views of Dubai, over the waters of the Arabian Gulf. The 48 passenger cabins that circle the enormous circumference of the wheel have the capacity to carry more than 1,750 visitors at once. One complete rotation of the wheel takes 38 minutes. 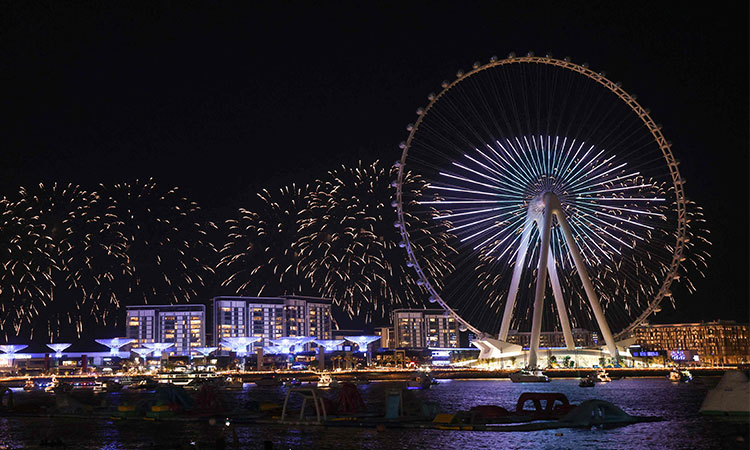 Fireworks light the sky above Dubai during the opening ceremony of the Ain Dubai. AFP

Ain Dubai’s key components were assembled using two of the world's largest cranes, and the structure used 11,200 tonnes of steel in its construction, 33 percent more than the amount used to build the Eiffel Tower. The landmark entertainment venue delivers extraordinary and customisable one-of-a-kind experiences for every occasion. A marvel of engineering, over 10 key countries came together in the making of Ain Dubai.

Sheikh Ahmed was also briefed on the hall designated to receive VIPs, and the souvenirs area attached to Ain Dubai that serves tourists and visitors. 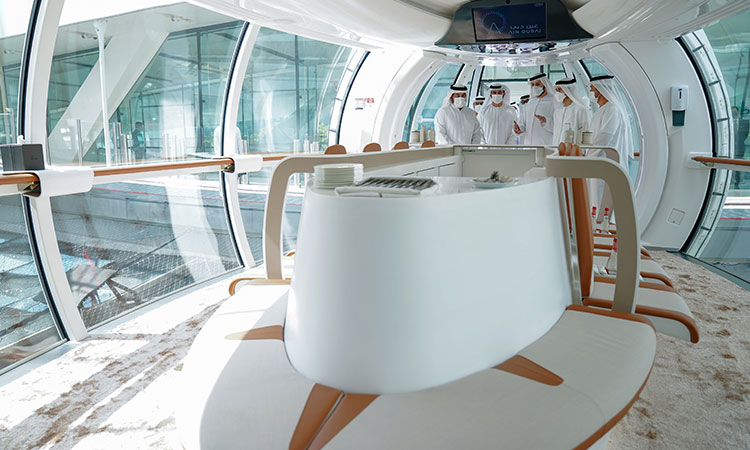 Sheikh Ahmed Bin Mohammed during his visit to one of the cabins of Ain Dubai. WAM

At the end of his visit, Sheikh Ahmed took a commemorative photo with the Dubai Holding team behind the development of the project.

Ain Dubai has quickly become recognised as one of the Middle East’s most remarkable landmarks which has elevated the aesthetic of Dubai’s skyline. The opening of the attraction supports Dubai’s long-term strategic vision to strengthen its global position as a key tourism hub and builds on its reputation as a leader in the global leisure and entertainment landscape. 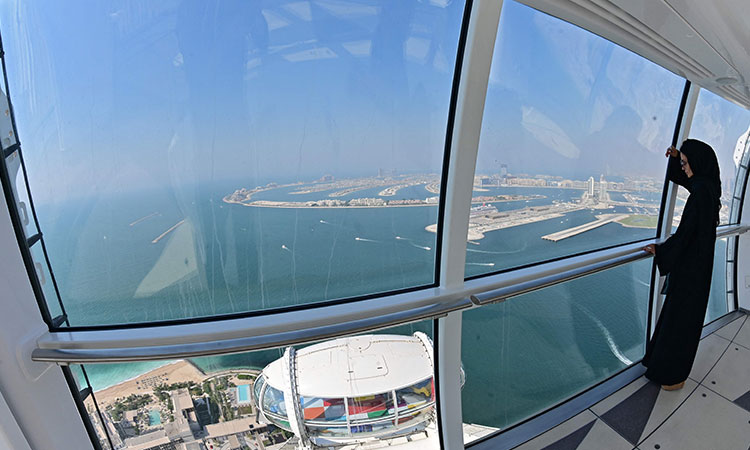 A woman looks out at Dubai from inside a capsule of the Ain Dubai. AFP

Bluewaters boasts a comprehensive offering spanning hospitality, lifestyle, residential, and leisure and entertainment, including the world-renowned Madame Tussauds Dubai as well as the very first Caesars Palace in the region.

Ain Dubai is welcoming the world with spectacular family entertainment and performances including a breathtaking light and drone show with fireworks at Ain Dubai Plaza over a two-day celebration. 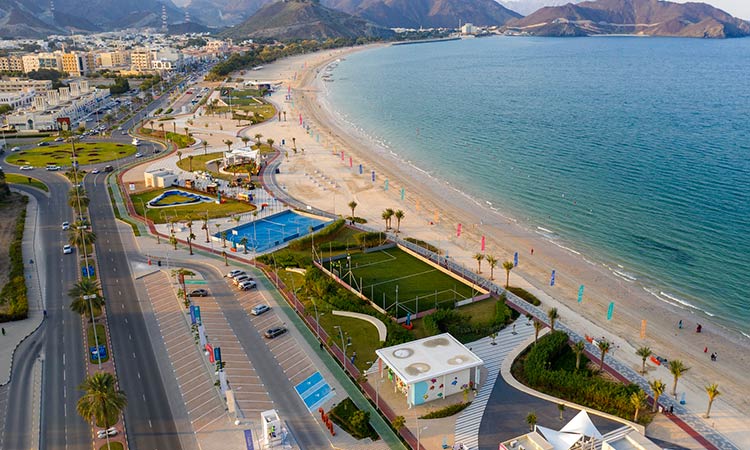 Enter spring with an exciting range of workshops and fun activities in the great outdoors until April 10, all thanks to Shurooq's top-quality innovative methods to keep the young and the old entertained 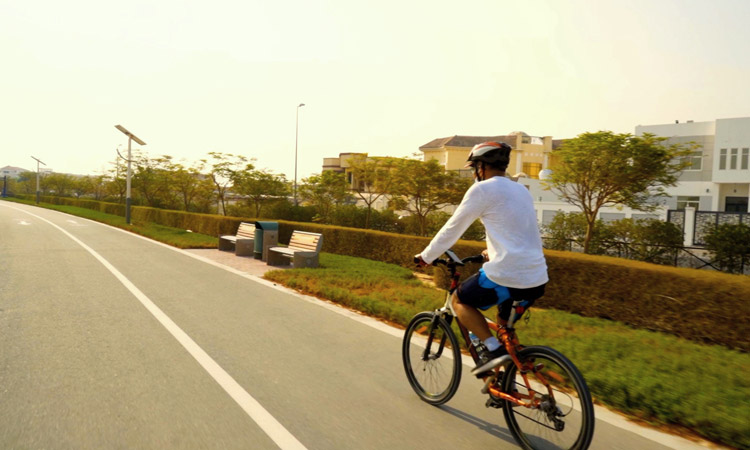 Concepts behind residential neighbourhood parks and playgrounds demonstrate the Municipality’s commitment to creating recreational facilities and services according to the needs of the residents of each area. 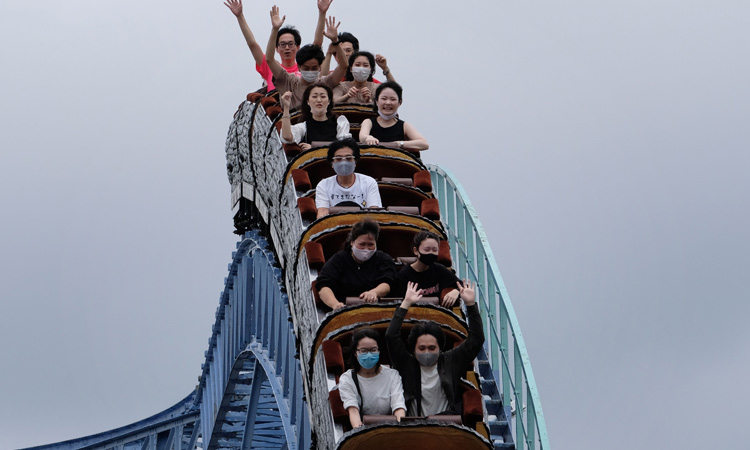 "Now our customers stay silent while riding on rollercoasters," a spokeswoman for amusement park operator Fujikyuko said, after the video on riding etiquette for the coronavirus era went viral.