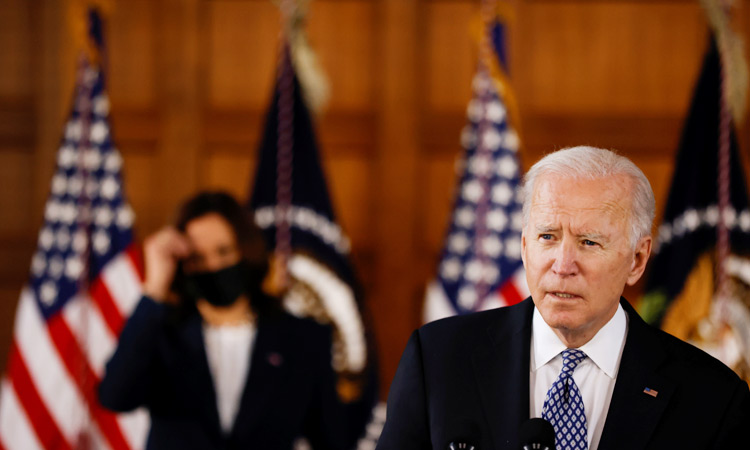 US President Joe Biden delivers remarks during a stop at Emory University in Atlanta, Georgia, US. Reuters

President Joe Biden deplored a surge in anti-Asian violence in the United States after a deadly shooting rampage in Georgia, and asked all Americans to stand together against hate during a visit to the state on Friday.

“Hate can have no safe harbor in America. It must stop. And it is on all of us, all of us together, to make it stop,” Biden said after the meeting, calling on US lawmakers to pass a COVID-19 hate crimes bill that would expand Justice Department review of hate crimes exacerbated by the pandemic. 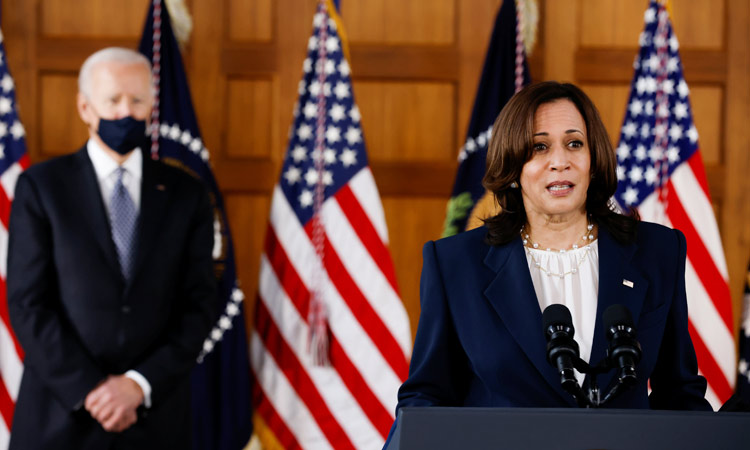 US Vice President Kamala Harris delivers remarks during a stop at Emory University in Atlanta, Georgia, US. Reuters

Harris, the first Asian-American vice president in US history, tied the violence to the long history of racism in the United States and likened it to the targeting of Muslims after the Sept.11, 2001, attacks.

A 21-year-old man has been charged with Tuesday’s murders at three spas in and around Atlanta. Investigators said the suspect, who is white, suggested that sexual frustration led him to commit violence. But political leaders and civil rights advocates have speculated the killings were motivated at least in part by anti-Asian sentiment. 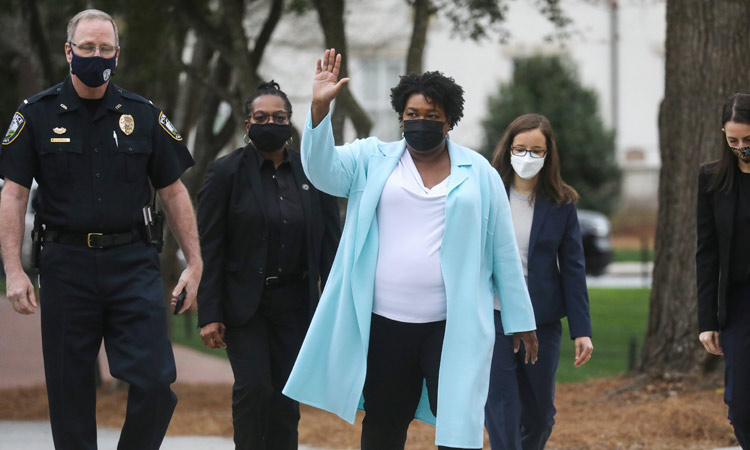 Stacey Abrams arrives for a meeting with Joe Biden and Kamala Harris, along with local leaders and elected officials at Emory University in Atlanta, Georgia, US. Reuters

Advocates say the surge of attacks on Asian Americans is largely the result of the community being targeted over the coronavirus, which was first identified in Wuhan, China, in late 2019.

On Friday, US House of Representatives Speaker Nancy Pelosi said the violence was exacerbated by language used by former President Donald Trump, who repeatedly referred to COVID-19 as the “China virus” and the “kung flu.”

Biden ordered the US flag flown at half-staff at the White House to honor the victims of the Atlanta area shootings.

The meeting with Asian-American community leaders was a shift in focus of a trip originally planned to promote the newly enacted $1.9 trillion coronavirus relief package.

Asian-American voters constitute one of the fastest growing racial and ethnic groups in the country and turned out in record numbers in presidential battleground states in the 2020 election, according to data from TargetSmart, a Democratic political data firm.

VIDEO: Biden 100% fine after stumbling while boarding Air Force One

US, China spar in first face-to-face meeting under Biden

In Georgia, Asian-American and Pacific Islander voters exceeded their total 2016 turnout by 58%, the firm said. These voters were key to carrying Biden to success in states where the race was close such as Georgia, the firm said.

As he headed to Georgia, Biden stumbled as he climbed aboard Air Force One. White House spokeswoman Karine Jean-Pierre told reporters he was “doing 100 per cent fine” and suggested high winds at Joint Base Andrews near Washington may have been a factor. 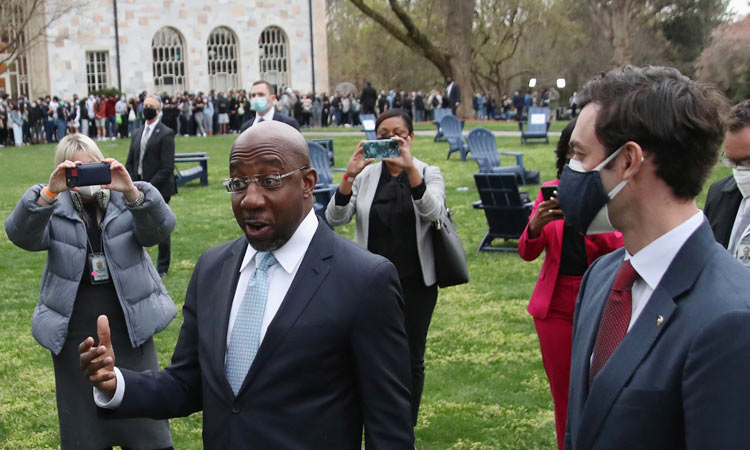 The Democratic president’s trip was initially part of the “Help is Here” campaign, which he kicked off on Monday to promote his promise of “shots in arms and money in pockets,” after signing the COVID-19 relief bill into law last week. Biden has travelled to Pennsylvania and Harris has been to Nevada and Colorado to tout the benefits of the package.

Before they met with Asian-American leaders, Biden and Harris received a coronavirus update at the US Centres for Disease Control and Prevention where they thanked health officials for their effort in fighting the pandemic.

“This is a war and you are the frontline troops,” Biden said. “We owe you a debt of gratitude for all the lives you’ve saved.”

In his remarks after meeting with community leaders, Biden touted the COVID-19 relief bill’s benefits for Georgia, saying the state’s schools will get $4 billion and state government $5 billion.

“That’s going to make it possible to keep a lot of police officers, firefighters, teachers and other first responders on the job,” he said.

Harris and Biden also met with Stacey Abrams, a former Georgia gubernatorial candidate whose get-out-the vote efforts are widely credited with helping Biden carry the state last November and their fellow Democrats win two runoffs in Georgia that gave them control of the US Senate.

“If anyone ever wondered if voting can change a country, Georgia just proved it can,” he said. But he warned the battle for voting rights was not over.

They discussed the Georgia legislation “along with possible solutions to make voting more accessible,” spokeswoman Jean-Pierre said in a statement.

Republicans across the country are using Trump’s false claims of voter fraud in 2020 to back state-level voting changes they say are needed to restore election integrity. 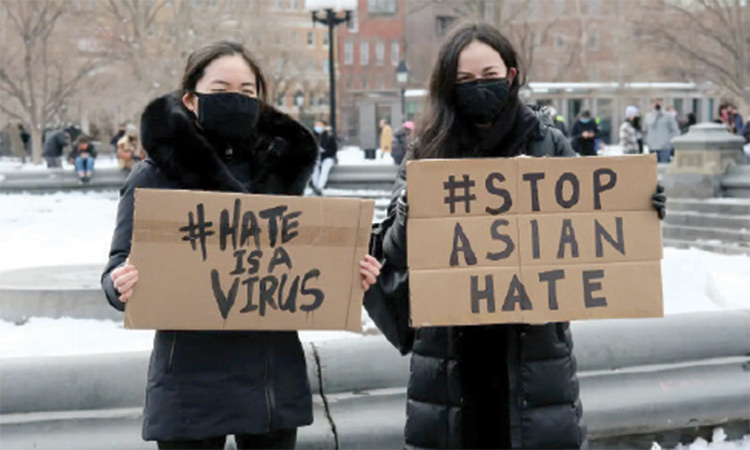 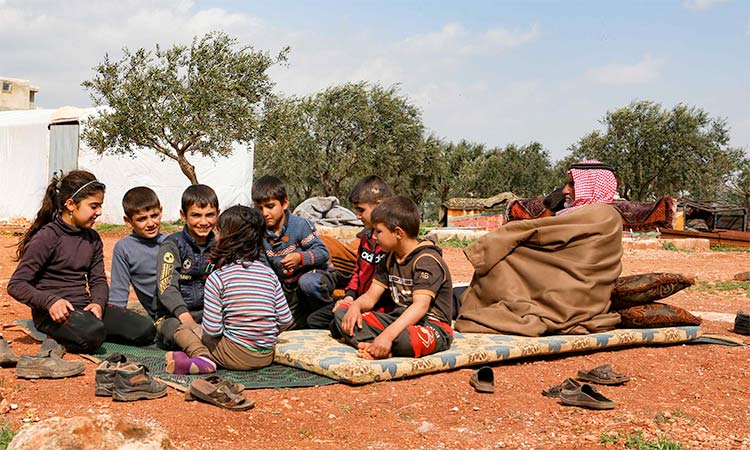