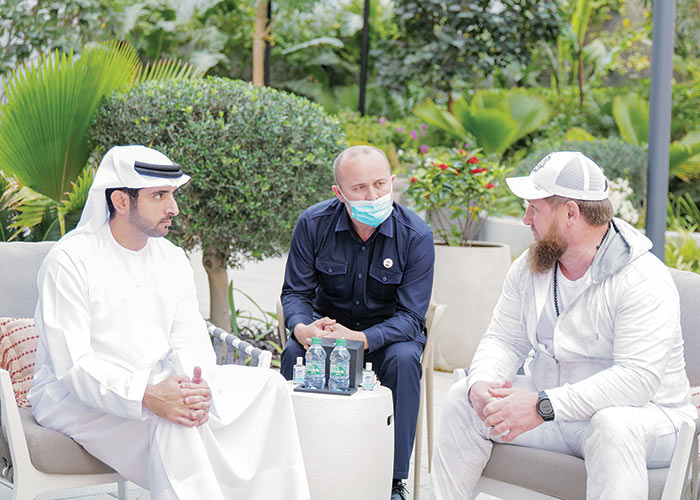 Sheikh Hamdan and the Chechen President discussed bilateral relations and means to further strengthen them in various fields.

Sheikh Hamdan and the Chechen President discussed bilateral relations and means to further strengthen them in various fields.

Kadyrov praised the successful arrival of the UAE’s Hope Probe to Mars and its entry into orbit. He noted that this achievement would enhance the country’s stature regionally and internationally.

Present at the meeting were Mohammad bin Abdullah Al Gergawi, Minister of Cabinet Affairs, and Omar bin Sultan Al Olama, Minister of State for Artificial Intelligence, Digital Economy and Teleworking Applications, along with a number of officials.

His Highness Sheikh Mohamed bin Zayed Al Nahyan, Crown Prince of Abu Dhabi and Deputy Supreme Commander of the UAE Armed Forces, recently received a letter from Vladimir Putin, President of Russia, covering the bilateral ties between the two friendly countries and ways of strengthening their overall cooperation and coordination, under the framework of their strategic partnership, as well as several issues of mutual concern.

His Highness Sheikh Mohamed bin Zayed received the letter while welcoming Ramzan Kadyrov, President of Chechnya, who delivered the letter.

During the meeting, His Highness Sheikh Mohamed welcomed Kadyrov and extended his sincere greetings to President Putin while wishing the Russian Federation and its people further development and prosperity.

H.H Sheikh Mohamed and Kadyrov also discussed the friendship and cooperation between the UAE and Chechnya and ways of developing them in all areas.

Kadyrov congratulated Sheikh Mohamed and the UAE’s leadership and people for the successful journey of the Hope Probe to the orbit of Mars, as part of a historic scientific mission.

Sheikh Mohamed then thanked Kadyrov for his honest feelings about the UAE’s success in realising this international project and wished him and his people further advancement and wellbeing.

Kadyrov thanked the UAE’s leadership for its initiatives that aim to support other countries overcome the coronavirus pandemic and commended the medical supplies sent by the UAE to Chechnya to support local health workers.