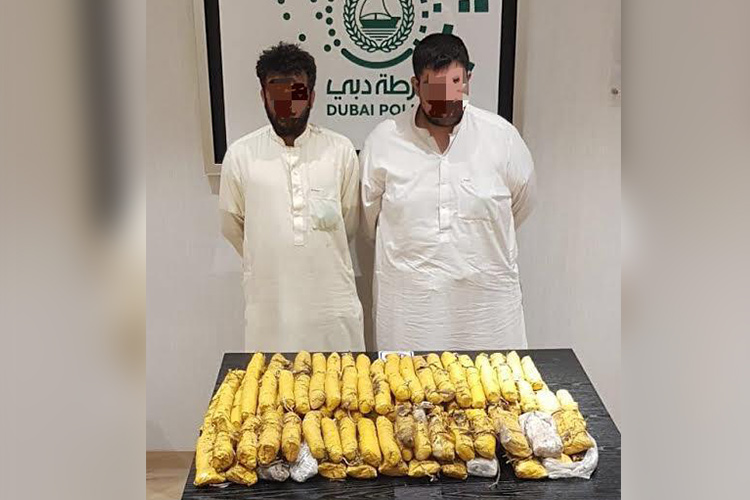 The duo in Dubai Police’s custody.

The Dubai Police have thwarted a plot of an overseas criminal gang, which attempted to peddle 40 kilogrammes of crystal drug in the country. The security teams of the Dubai Police arrested cousin of the gang’s mastermind and another suspect, in an operation dubbed the "Black Bag", due to the bag they used to transport the large quantity of narcotics from one place to another, to deliver to one person. Lieutenant-General Abdullah Khalifa Al-Marri, Commander-in-Chief announced on Saturday.

Brigadier General Eid Mohammed Thani Hareb, Director of the Anti-Narcotics General Directorate at the Dubai Police, stated that the "Black Bag" operation began after receiving reliable information indicating presence of a gang in the country consisting of two Asians seeking to peddle drugs and spread them among young people. They also knew that the gang’s mastermind runs the gang from his homeland.

Consequently, a team was entrusted and all legal procedures were taken to obtain permission from the Dubai Public Prosecution to seize and search the accused, in addition to searching their vehicle and their residence, Hareb added.

He continued, “The two Asian men were placed under surveillance so as to arrest them red-handed, as the two changed the place of drugs several times in different areas, but all their movements were under the eyes of the anti-narcotics teams 24 hours”.

“The anti-narcotics officers set zero hour to arrest the Asians, after they had taken the drugs from their last hiding place, put them in the black bag, and then moved to another area using a vehicle,” Hareb added.

He continued, “After they got out of the vehicle, the security teams raided them, and they were arrested in possession of the black bag, which was found containing 40 kilograms of crystal.”

The suspects admitted that they intended to deliver the narcotics to another person, whose name would know later from the gang’s boss, Hareb said.

The first accused, (the cousin of the gang’s boss), admitted that he was seeking money to improve his conditions, noting that he had contacted his cousin to help him by assigning any mission of his illegal business to him. He agreed to carry out the mission in return for Dhs30,000. He was assigned to transport drugs from one place to another and deliver them to one person, the police said.

The second accused, he tried to justify his guilty by that he was just assisting the first in transporting the narcotic from one place to another, claiming that he would not be compensated for his efforts.

Lieutenant-General Abdullah Khalifa Al-Marri, Commander-in-Chief, confirmed that the "Black Bag" operations translates the efforts made by Dubai Police to thwart the plots of drug dealers and peddlers seeking to spread their toxins among youth.

For his part, Maj. Gen. Khalil Ibrahim Al Mansoori, Assistant Commander-in-Chief for Criminal Investigation Affairs, said, “Thanks to God Almighty and the experience of the anti-drug teams, we were able to forcefully destroy a plot seeking to promote large amounts of narcotics in the country. That is why preemptive strikes to gang members are the hallmark of dismantling any criminal plot.”

He praised the efforts of the anti-drug teams in carrying out the" black bag "operation through the search, investigation and careful follow-up process, leading to busting the cousin of the gang’s mastermind and another accused, in addition to seizure of the drug in their possession.