VIDEO: Look, birds that hatched on Sheikh Hamdan’s SUV grow up and fly away - GulfToday

VIDEO: Look, birds that hatched on Sheikh Hamdan’s SUV grow up and fly away 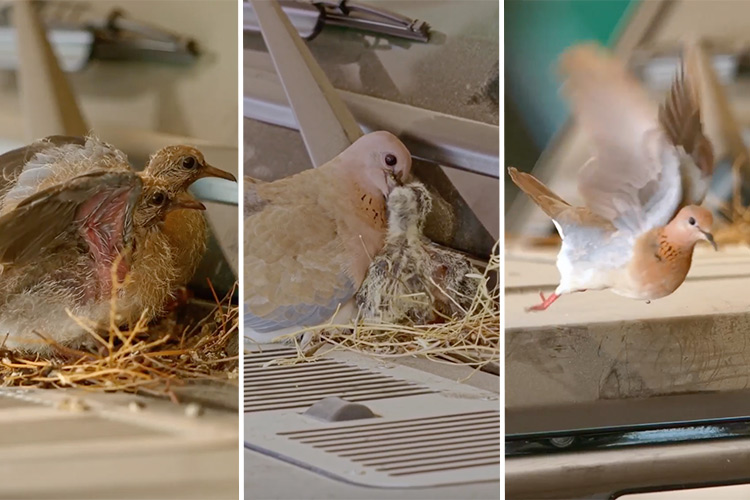 A combo image shows the different stages of the growth of birds at the bonnet of Sheikh Hamdan's SUV.

In a delightful moment, the two birds that hatched on the bonnet of Crown Prince of Dubai and Chairman of Dubai Executive Council Sheikh Hamdan Bin Mohammed Bin Rashid Al Maktoum’s Mercedes-AMG G63 SUV at the parking lot of his residence in Dubai which he cordoned off, have grown up and finally left to see the world.

The heartwarming video went viral as soon as the Crown Prince of Dubai shared it on Instagram.

The mother bird built the nest some weeks back and laid eggs on it.

The Crown Prince of Dubai shared a series of videos on his Instagram stories, which showed the mother bird bringing food for the babies.

Another clip showed the chicks extending their wings.

Yet another video clip showed the chicks preparing for the flight.

In the final clip, the chicks are seen flying away, leaving the place forever.

The video of the birds has been doing the rounds on the internet.

Sheikh Hamdan earlier said, “Sometimes the little things in life are more than enough,” while sharing a clip of the birds.

Sheikh Hamdan also added a piece of captivating music to the video.

Weeks ago, Hamdan shared videos and photos of the bird building the nest. Ever since, the Royal has not been near his car and told everyone to stay off the area.