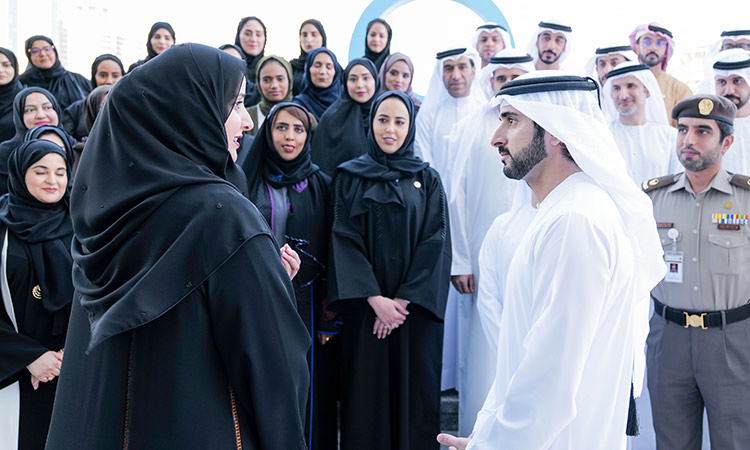 Sheikh Hamdan interacts with people during the launch of new phase of Dubai’s Happiness Agenda. WAM

Under the new phase, a Happiness Champion working in customer-oriented services will now be referred to as a ‘Smart City Experience Specialist’ while a Champion working in Human Resources-oriented roles will be called a ‘Work Environment Specialist’. The launch boosts the Happiness Agenda launched in 2016 by His Highness Sheikh Mohammed Bin Rashid Al Maktoum, Vice President, Prime Minister of the and Ruler of Dubai, to promote happiness in the city.

"The Happiness Champions contribute to a smart city’s soft power," said Sheikh Hamdan Bin Mohammed. "We have directed government entities to embrace both of the two new titles for Happiness Champions in their teams, and to align and unite all of their efforts and channel them towards a common goal: to design and build a smart city of the highest standards, upgrade city services, and enhance the living experience of Dubai’s residents and visitors."

Smart Dubai’s Director General Dr. Aisha Bint Butti Bin Bishr said, "We, at Smart Dubai, are fully aware of the responsibility we have been entrusted with, which is to oversee the emirate’s smart transformation. Leveraging the power of technology to raise the happiness levels of people in Dubai is the ultimate strategic objective of everything we do - a result that is being achieved due to the collaboration of all our government, semi-government and private sector partners working together, in line with the vision of our wise leadership." "We take great pride in the scope and strength of the relationships that tie government, semi-government, and private entities together in Dubai, and this is further enhanced by the Happiness Agenda initiative and the network of Happiness Champions," Dr. Aisha added.

"This also reflects the tremendous efforts undertaken by the Dubai Government, where, in addition to the smart technological integration among entities to provide seamless and efficient services, we find a connection and cohesion among people in these entities - embodied by the Happiness Champions - that reflects the harmony among these entities in pursuit of their goal to make Dubai the happiest and smartest city in the world." "The Happiness Agenda has long served as a roadmap for our efforts, and today, we celebrate yet another milestone in our journey, as we usher in a new identity for this ambitious project with a new vision and direction for the Agenda," she said.

"The Happiness Champions have been exceeding all expectations as they fulfil their roles across government entities. The new titles they will be carrying from now on will help them further specialise and focus their efforts, ultimately embedding the concept of ‘Smart Happiness’ in their organisations." Hamad Al Awadhi, Project Manager of the Happiness Agenda at Smart Dubai, gave a detailed presentation introducing Sheikh Hamdan to the many accomplishments of the Happiness Champions who have set an outstanding example in terms of teamwork. The team is made up of 78 Champions from the Customer Service and Human Resource departments at 43 different government, semi-government and private sector entities; their work has reflected positively on the efficiency of the government and the city as a whole.

His Highness was also shown the key outcomes and results of the Designing Cities Program which Smart Dubai organises as a learning expedition for Dubai’s Happiness Champions annually. The Program revolves around three key pillars - Smart, Citizen and Design. Over the past three years the Happiness Champions have travelled to Florida, Copenhagen and Tokyo as part of the Designing Cities Programme.