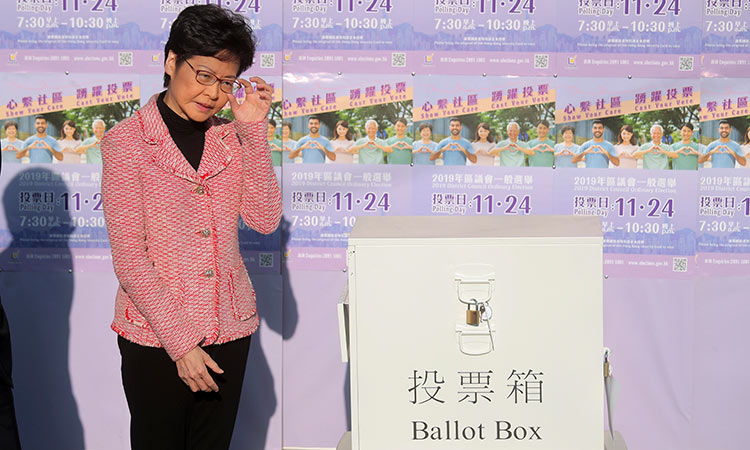 Long lines snaked around plazas and extended for blocks as citizens of the semi-autonomous Chinese territory turned out in droves on Sunday for an election seen as a test of public support for anti-government protests that have persisted for more than five months.

Record numbers of people voted on Sunday in district elections viewed as a barometer of support for city leader Carrie Lam, who has been besieged by nearly six months of often violent pro-democracy protests.

Hong Kong protesters to rally after another night of violence

The Electoral Affairs Commission said 31% of the city’s 4.1 million registered voters cast ballots in the first five hours, up from 14.5% in the same period four years ago.

Brutal attacks on election candidates in recent weeks have thrust the lowest tier of government in the Chinese-ruled city into the world spotlight as the government struggles to quieten angry demands for universal suffrage. 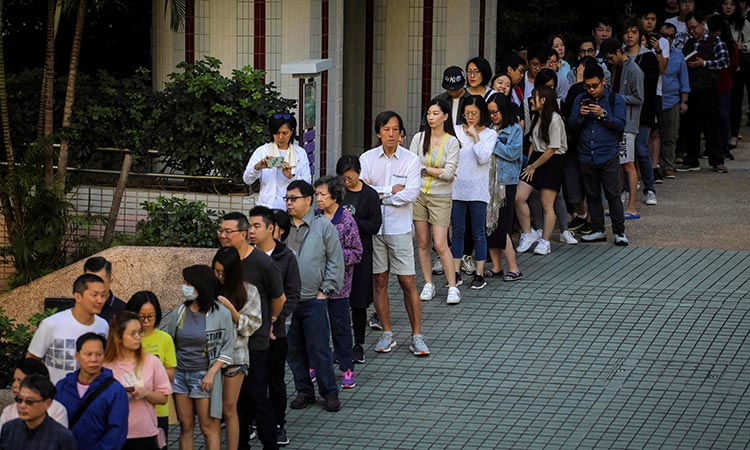 People queue to cast their vote during the district council elections in South Horizons in Hong Kong. AFP

Government data showed 1,524,675 people had cast their vote by 1.30 p.m., with nine hours still left until polling stations closed, surpassing the 1,467,229 people who voted in the last district elections four years ago.

First results should start trickling in before midnight.

"I am not optimistic even though we have a high turnout this year," said voter Peter Wong, 39, who works in education. "I don’t mind who wins more seats as long as it’s a fair election."

There was only a small police presence, in contrast to reports that riot police planned to guard all polling stations and almost the entire force of 31,000 would be on duty.

Jimmy Sham, a candidate for the Civil Human Rights Front, which organised some of the mass anti-government rallies of recent months, was beaten by men with hammers in October. 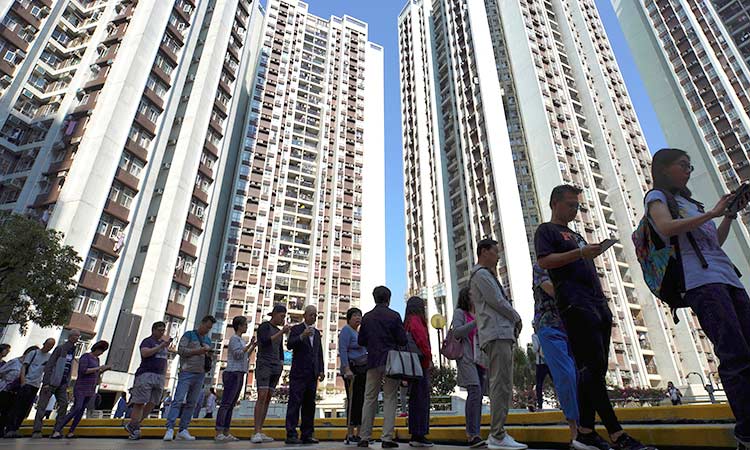 People line up to vote outside of a polling place in Hong Kong on Sunday. AP

"We can see Hongkongers are longing for a chance to express their stand," he said. "We don’t know yet, at the end of the day, if the democrats can win a majority. But I hope our Hong Kong citizens can vote for the future of Hong Kong."

Beijing-backed Lam cast her ballot in front of television cameras and pledged that her government, widely seen as out of touch with the population, would listen "more intensively" to the views of district councils.

She also expressed hope that the relative calm of the past few days would hold.

The anti-China protests have at times forced the closure of government, businesses and schools in the city's worst political crisis in decades, as police used tear gas, rubber bullets and water cannon in response to petrol bombs, rocks and occasionally bows and arrows. 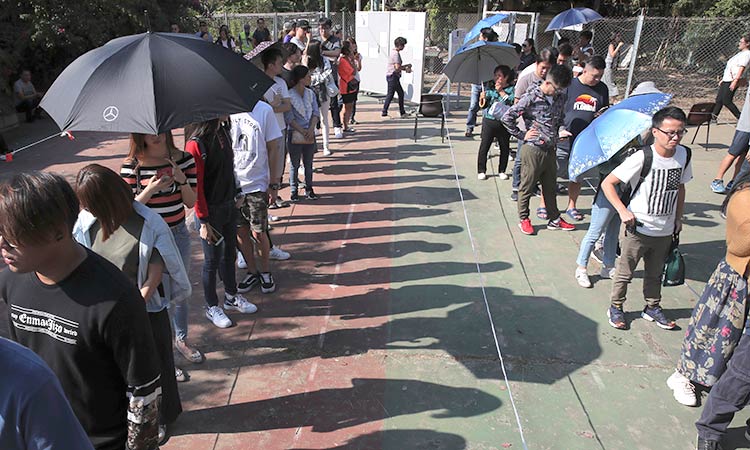 People line up to vote outside of a polling place in Hong Kong on Sunday. AP

"I hope this kind of stability and calm is not only for today's election, but to show that everyone does not want Hong Kong to fall into a chaotic situation again, hoping to get out of this dilemma, and let us have a fresh start," Lam said.

A record 1,104 candidates are vying for 452 seats and a record 4.1 million people have enrolled to vote for district councillors who control some spending and decide issues such as recycling and public health.

'Freedom of speech is lost'

If the pro-democracy campaigners gain control, they could secure six seats on Hong Kong's Legislative Council, or parliament, and 117 seats on the 1,200-member panel that selects its chief executive.

Restaurant manager Jeremy Chan saw the elections in the Asian financial hub as offering Beijing supporters a chance to share their opinions without fear. 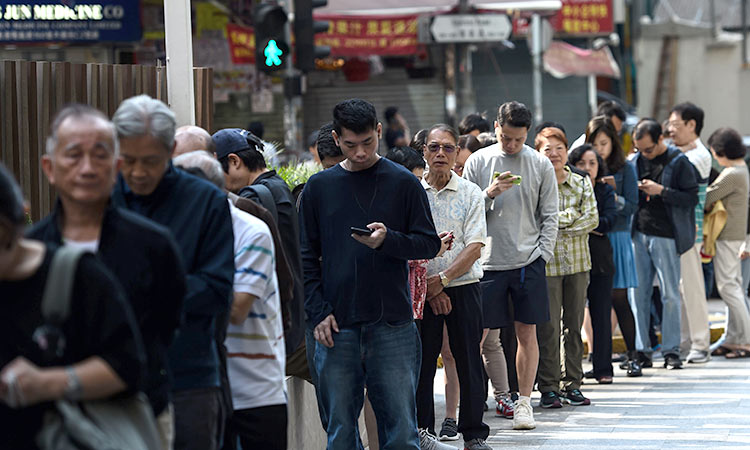 People queue to cast their vote during the district council elections in Wan Chai district of Hong Kong. AFP

"They believe they are fighting for democracy, fighting for Hong Kong, but the rioters only listen to what they want to hear," said the 55-year-old, citing vandalism of businesses seen as pro-Beijing. "Freedom of speech is lost."

The protests started over a now-withdrawn extradition bill that would have allowed people to be sent to mainland China for trial but rapidly evolved into calls for full democracy.

The unrest poses the biggest popular challenge to Chinese President Xi Jinping since he came to power in 2012.

Sunday was the seventh day of a stand-off at Polytechnic University, its campus surrounded by police as some protesters still hid out on the sprawling grounds roamed by first aid workers. 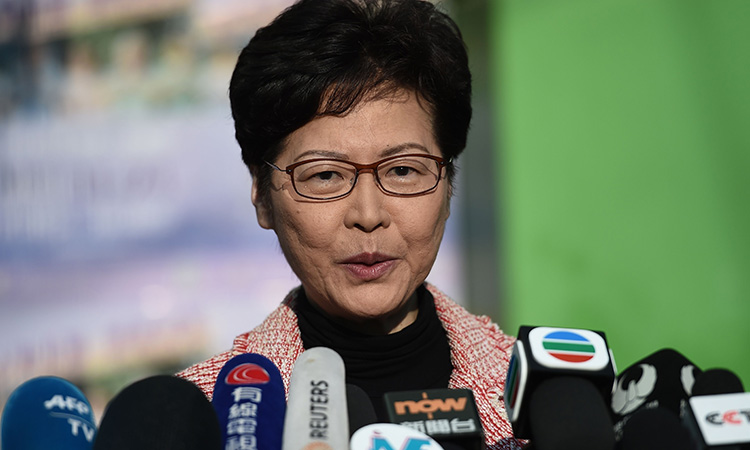 Hong Kong Chief Executive Carrie Lam speaks to the press after casting her vote in Hong Kong on Sunday. AFP

Demonstrators are angry at what they see as Chinese meddling in the freedoms promised to the former British colony when it returned to Chinese rule in 1997. They say they are also responding to perceived police brutality.

China denies interfering and says it is committed to the "one country, two systems" formula for the autonomy of Hong Kong. Police say they have shown restraint in the face of potentially deadly attacks. 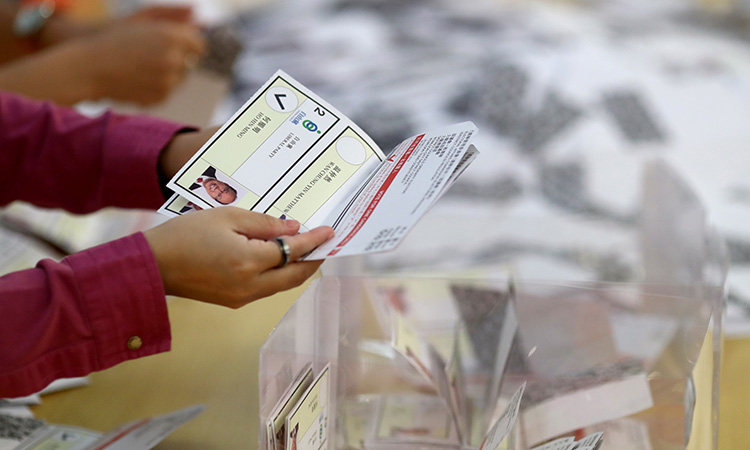 In a rout that stunned the semi-autonomous territory, candidates seeking to loosen control by China seized an overwhelming majority of the 452 seats in the city's 18 district councils, bodies that have historically been firmly in the grip of a Beijing-aligned establishment.