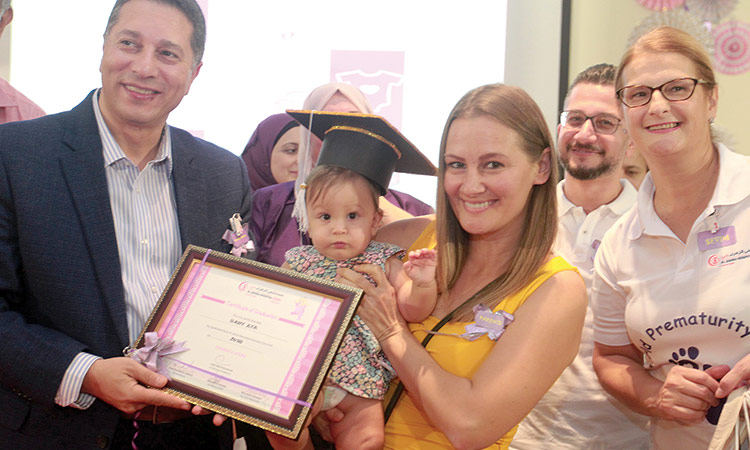 Baby Aya is among the premature babies feted at the “World Prematurity Day” celebrations at Al Zahra Hospital in Dubai on Saturday evening. John Varughese/Gulf Today

Thirty preemies, born in the past year, marched down the aisle with their proud parents for their first graduation ceremonies in Dubai on Saturday evening.

The celebration, held for the second consecutive year and on the eve of the “World Prematurity Day,” was part of the awareness programme of the Al Zahra Hospital in Dubai on how to prevent pre-term births as well as how to cope with the special attention infants born less than the 40 weeks full term, according to chief executive officer Dr Mohaymen Abdelghany.

“World Prematurity Day” is every Nov.17.

One-year Dubai housewife Cameroonian Angele Marie Mendjeukeu related to Gulf Today how her youngest of three was born at 24 weeks. She began experiencing the normal “back belly pain” she had gone through with her first two pregnancies evening of Sept.14.

Two hours thereafter, was the emergency Caesarian procedure. Her baby was born at 900 grammes and 35 centimetres (cms).

On Saturday, Mendjeukeu visited her newborn at the Neonatal Intensive Care Unit (Nicu).

“My doctor said the cause of the premature birth was the inflammation of my placenta. I was advised not to breastfeed my baby (upon her birth) since she was too small. She is now 2.3 kilogrammes (kgs) and 43cm long.”

In her speech, Neonatal Services director/consultant neonatologist Dr Rima Mounla stated that women must take full responsibility for their health for safe pregnancy.

She quoted World Health Organization records: “Every year, an estimated 15 million babies are born pre-term or an average of one in 10 pregnancies (average of 37 weeks) across the world. Pre-term birth complications are the leading cause of death among children around the world at one million deaths per year.”

Al Koko and Ibrahim stressed that breast milk remains and is the best food for preemies.

“From the start, they need breast milk. We do not want them to be cut off from the placenta feeding they had from their mothers. They need the nutrients. We call it the minimal feeding wherein a small amount of the initial expressed cholostrum of the breast milk is given them for the nutrient and immunologic values,” explained Ibrahim.

Additional food is the “parentral nutrition” given intravenously (IV drip), “prepared by the clinical pharmacist under sterile condition, only when a premature baby is delivered. It is a collection of the basic nutrients of amino acids, carbohydrates and lipids.”

“We gradually increase the amount of breast milk the baby is receiving and decrease the amount of IV drip nutrition (in accordance to the monitored weight and blood tests conducted). The more mature the baby becomes, the more expressed breast milk he/she needs and will be fed. Pre-term babies require more calcium, more phosphorous and more calories. They cannot rely on the breast milk as the sole source of nutrition so we fortify the mother’s milk. They require Iron and Vitamin D which we give in drops,” said Ibrahim.

He said the baby is discharged from the Nicu at a minimum weight of 1.8kg when the “amount of fat under his/her skin can fully protect him/her from the cold or outside environment, and when he/she has the ability to live without the help (of life support system).” To counter subsequent stress, parents and mothers, according to Al Koko, can “spend as much time with their babies at the Nicu if their conditions permit. Touch him/her often even you cannot hold him/her. Skin-to-skin care could be done once major support system to organ systems.”

Mounla said that among the regular medical consultations for possible illnesses, best preparation women could do for their pregnancy is to avoid tobacco products, alcohol and illegal drugs “so their babies (are not going to suffer from) foetal alcohol syndrome (brain damage and growth problems) and neonatal abstinence syndrome (a collective set of problems due to the illegal drugs taken by the mothers during pregnancy).”