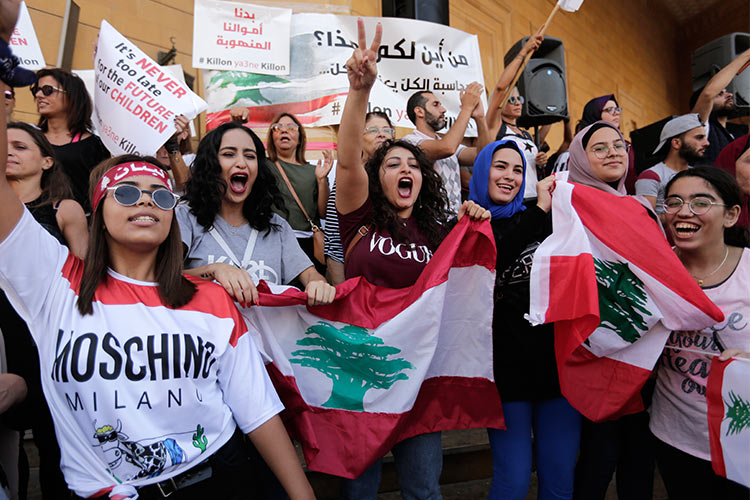 For the sixth day running, Lebanon was on the boil. Thousands of protesters continued baying for a fresh team of leaders to helm the nation’s affairs, even as Prime Minister Saad Hariri sought global support for his reforms.

Hariri hopes the reform package will spiral foreign investments into the country and salvage Lebanon's struggling economy. But the nationwide demonstrations only grew larger on Monday after the reforms were announced, with protesters dismissing them as more of the same "empty promises" seen in past decades that never materialised.

Lebanon’s biggest demonstrations in 15 years have unified an often-divided public in their revolt against the leaders who have brought the country to economic ruin. The country has one of the highest debts in the world that stands at more than $86 billion, or more than 150 per cent of the gross domestic product.

In downtown Beirut, thousands of protesters were digging for a sixth day of demonstrations, insisting Hariri's government resign. Scores of other protesters held a sit-in outside the central bank, while protests on other cities and town continued as well.

In the capital, volunteers donned gloves and cleaned up streets after euphoric crowds partied deep into the night on Monday, dancing to impromptu concerts.

Among them, Hussein al-Aliya, a 35-year-old bus driver, was sweeping away rubbish after a night of protests.

"If it took just three days to approve (the reforms), why haven't they done so for the past 30 years?" he asked.

"We've come down to the street from all religious sects to bring the whole of the state down," said the young man from the Shiite stronghold of southern Beirut.

"The lawmakers and ministers are all thieves and the governor of the central bank is covering up for them," he said.

But "there are young women and men studying in the universities who could take on jobs in parliament and government."

Plans of the government include cutting debt servicing costs, privatising no more than 40% of the telecoms sector, improving the dysfunctional power sector and cutting salaries of top officials in half.

Lebanese officials hope that plans to fix the electricity sector – which costs the state around $2 billion annually – would lead to the release of $11 billion in loans and grants made by international donors at a conference in Paris last year.

Walid Joumblatt, a powerful politician who has representatives in the government, attacked the reforms as "weak drugs" that aim to buy time.

From 2007 until 2010, Lebanon's economy grew at an average of 9% annually. But it hit a major roadblock in 2011, when a political crisis brought down the government and the uprising in neighbouring Syria stoked unrest among Lebanese factions.

Euphoric crowds partied deep into the night, leaving all political and sectarian paraphernalia at home to gather under the national cedar flag, dancing to impromptu concerts and chanting often hilarious anti-establishment slogans. 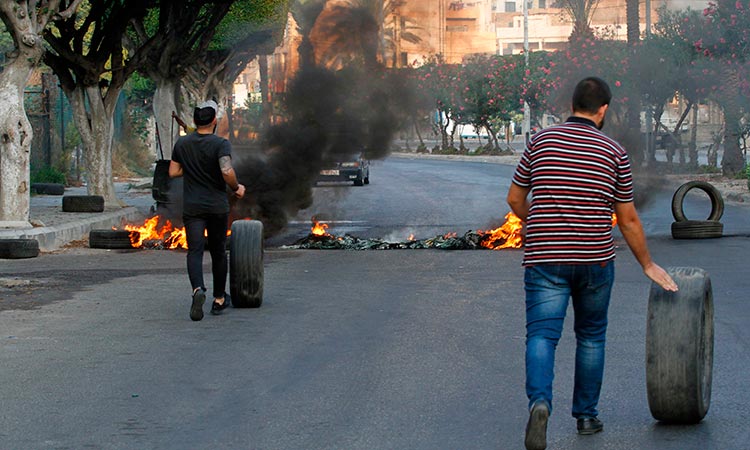 Lebanon's economy has been on the brink of collapse for some time and the initial grievances of the protesters were over proposed tax hikes.

But the demonstrations have evolved into a massive push to unseat ruling dynasties widely seen as corrupt beyond redemption, and Lebanese Prime Minister Saad Hariri's 11th-hour rescue plan was met with disdain on the street.

The cabinet was due to meet on Monday morning and expected to approve a raft of measures, including the scrapping of new taxes and a sweeping privatisation programme, among others.

"This was not a paper suggested to get people off the street," a senior cabinet official insisted.

Protesters gathered in front of the government houses said the move smacked of a desperate attempt by the political class to save their jobs.

"It is a day of destiny for us. All our hard work and efforts in previous days and years were to get us to this moment," Roni al-Asaad, a 32-year-old activist in central Beirut, said.

"If they could have implemented these reforms before, why haven't they? And why should we believe them today?" 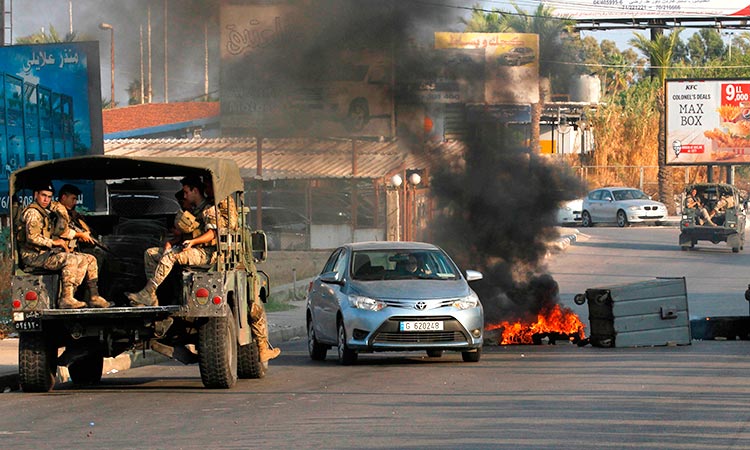 Members of the Lebanese army arrive to open a road blocked by protesters in Saida on Monday. AFP

What was initially dubbed the "WhatsApp revolution" morphed into a mass non-partisan push for a total overhaul of a sectarian power system still run mostly by civil war-era warlords, three decades after the end of the country's conflict.

Demonstrators, old and young, spoke of their joy of experiencing a rare feeling of national unity as they converged towards protest sites at the weekend.

Given the size of the gatherings, the five-day-old mobilisation has been remarkably incident free, with armies of volunteers forming to clean up the streets, provide water to protesters and organise first aid tents.

Lebanon's debt-burdened economy has been sliding towards collapse in recent months, adding to the economic woes of a population exasperated by rampant corruption, the lack of job opportunities and poor services.

Forest fires also devastated parts of the country last week, with politicians accused of inaction as the country burned.

Among the protesters' main grievances is the poor supply of electricity from the state, which citizens have to complement with costly generators.

Usually prone to blame anti-government mobilisation on another party or a foreign conspiracy, Lebanon's top political figures have appeared to acknowledge that none of them were spared by public anger. 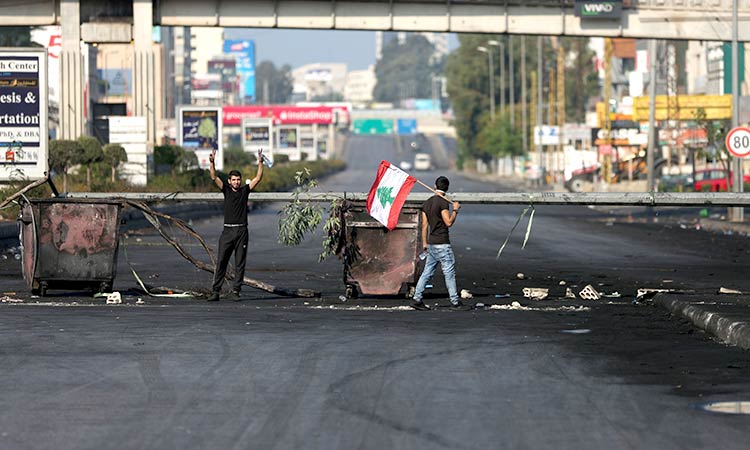 Protesters block the entrance of the Lebanese capital Beirut with barricades on Monday. Patrick Baz/AFP

The embattled premier went live on television Friday, on the second of protests, to give his uneasy coalition partners 72 hours to back his rescue plan.

"What happened in the street is a volcano that can't be contained with timely solutions," Imad Salamey, a political science professor at the Lebanese American University, said.

"It is difficult for the demonstrators to regain trust in the state in 72 hours and with solutions only presented on paper," he said.

The deadline expires at 7:00 pm Monday (1600 GMT) and Hariri's wording suggested he could resign if his move failed.

Lebanon's embattled political leaders have warned that the government's resignation at this time would only deepen the country's crisis.

Al-Akhbar newspaper, which is close to Hezbollah, published a picture of protesters carrying a giant flag on its front page with a commentary on "Test Day: Power or People?". 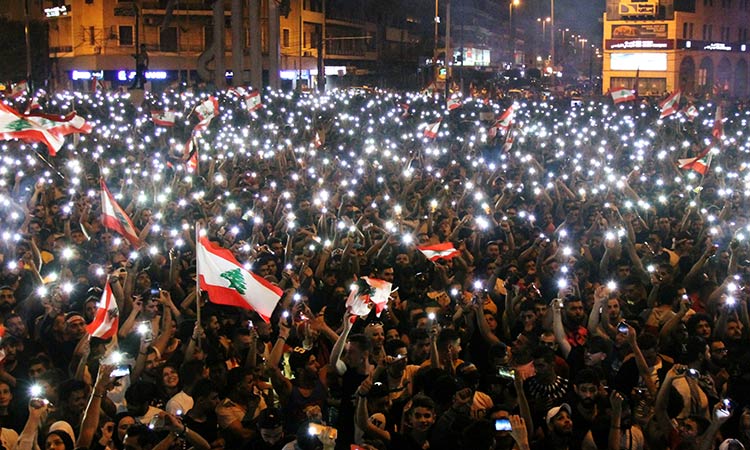 The French-language newspaper L'Orient Le Jour said "The hour of truth has arrived."

Several hundred thousand people demonstrated in central Beirut alone on Sunday, with massive gatherings spreading across all regions of the small Mediterranean country.

Schools, banks, universities and many private businesses closed their doors Monday, both for security reasons and in an apparent bid to encourage people to join the demonstrations.