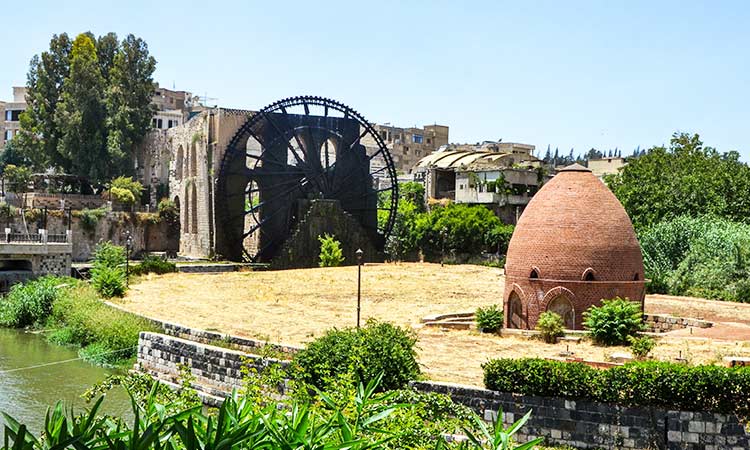 A view of the Maamorieh Noria (water wheel) along the Orontes (Assi) river in the city of Hama in west-central Syria. AFP

On a riverbank in Syria's Hama, Mohammed Sultan tinkers away on a giant water wheel, one of a dwindling number of artisans able to restore the city's ancient wooden landmarks.

The touristic landmarks have largely been spared by Syria's nine-year war, but some have fallen into disrepair or seen part of their timber stolen or burnt.

"It's our duty to bring them back to life," the 52-year-old said, sweat forming on his forehead after hammering a tenon into a freshly cut wood beam.

Nearby passers-by pose for pictures at the feet of the huge dark wooden wheel he is fixing, the city's largest and oldest, known as the Mohammadia.

Twenty-two metres (72 feet) in diameter, the wheel rises high above the water level and is believed to date back to the 14th century. 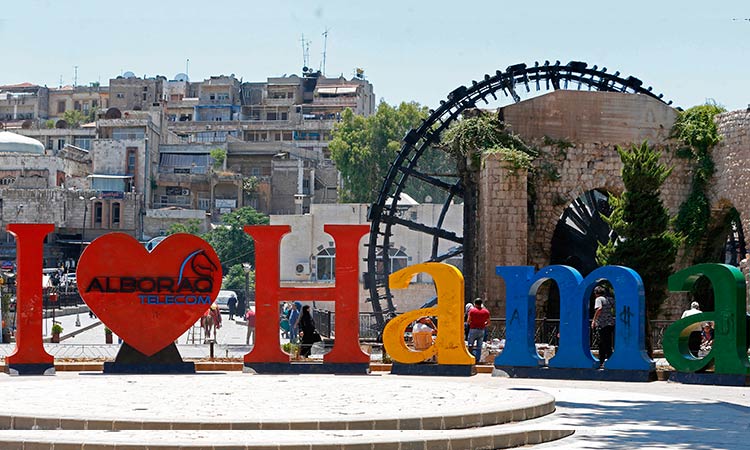 A view of the "I (love) Hama)" sculpture before the Jesrieh Noria (water wheel) along the Orontes (Assi) river. AFP

"The norias are Hama's spirit," Sultan said, as children splash around in the Orontes.

"Without them, the city would be dead and drab."

Giving back to my city

Clambering up and down a stone staircase to the wheel's centre, Sultan replaces some wood along one of its massive spokes.

"When I work with my colleagues to fix the norias, I feel like I'm giving something back to my city," said the artisan, who has 22 years of experience in his unique field.

"I forget how tired I am as soon as one starts turning again."

Hama city, north of the capital Damascus, was mostly spared fighting during the war, though battles did at times rage in the nearby countryside. 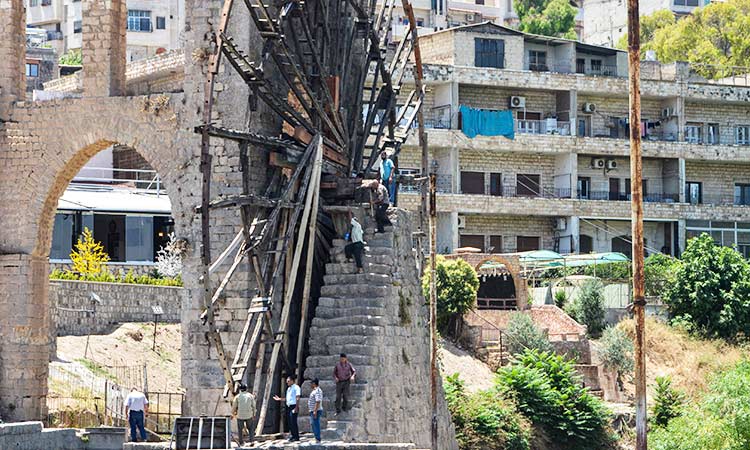 In other parts of Hama province, 10 of the region's 25 norias have in recent years stopped their slow, creaking rotation above the waterline.

The water wheels are believed to have originated in the Arab medieval era, but a mosaic dated 469 BC suggests they could have existed even earlier, UNESCO says.

Held together by an assortment of walnut, pine, poplar and oak wood, they once carried small wooden boxes that scooped up water each time they plunged into the river.

The wheels drew from the Orontes to irrigate nearby gardens, as well as supply water to mosques, public baths and homes on its banks. 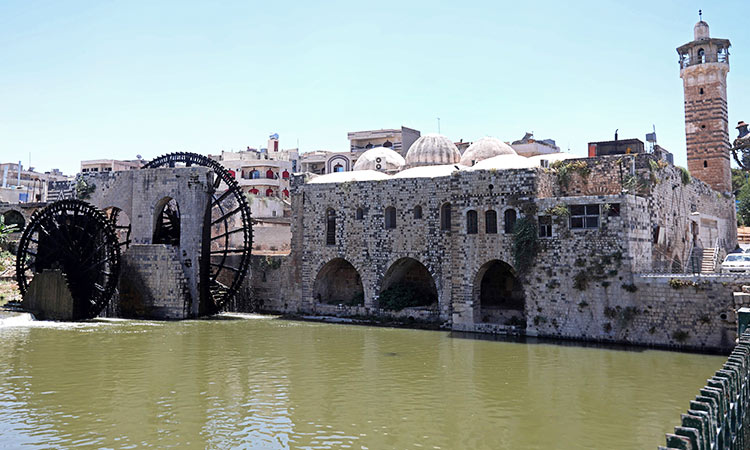 A view of the, left to right, Saahonieh and Gaabarieh Norias (water wheels). AFP

Though no longer the case today, the wheels remain the pride of the city, drawing in droves of tourists before the war and featuring on Syrian banknotes.

"We continue to give great importance to restoring these historical relics in view of their symbolic value," Hama mayor Adnan Tayyar said.

"It's impossible to visit Hama without stopping by the norias," he added.

Last of the noria craftsmen

Ahd Saba al-Arab, head of the Hama noria authority, said he hoped visitors would soon flock back to the city.

But maintenance of the water wheels was becoming increasingly difficult, he said. 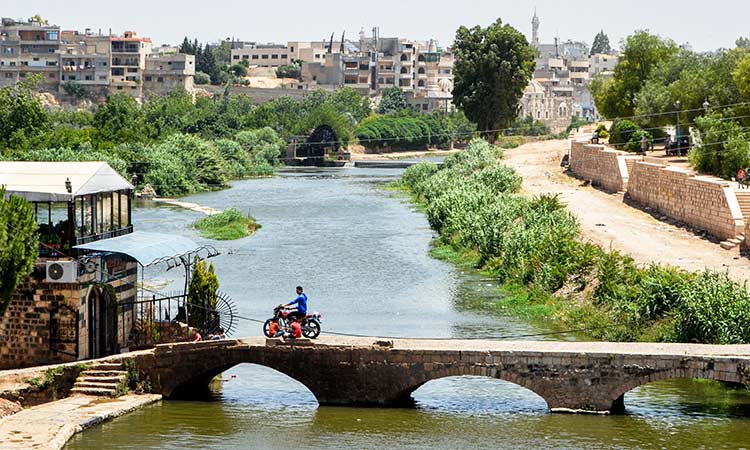 The view from the Mohammadieh Noria (water wheel) along the Orontes (Assi) river. AFP

This was because the right wood had become expensive and in short supply, and there was now "a great scarcity of artisans with the right know-how."

The number of suitably skilled craftsmen has fallen from 35 to just nine, after many died or emigrated during the conflict.

Ismail, another of the last surviving experts, says he is proud to be able to carry on a tradition "all done by hand".

"The norias are the city's backbone," said the bespectacled man in his fifties.

But, moving agilely from one side of the Mohammadia to the other, he is worried about the next generation's lack of interest in the profession.

"Our craft is transmitted from father to son, but today we can no longer pass it on to our children," he said. 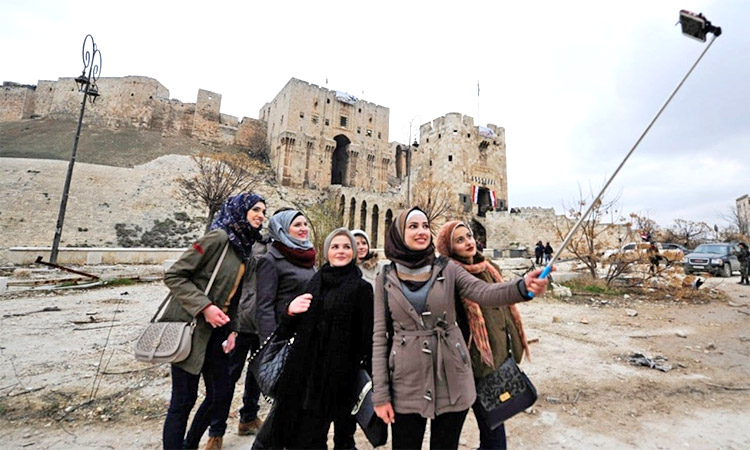 I woke up a few days ago to Twitter selfies of Westerners posing in Syrian government-controlled areas. Being an exiled Syrian for five years now, I try to avoid pictures of my home country.