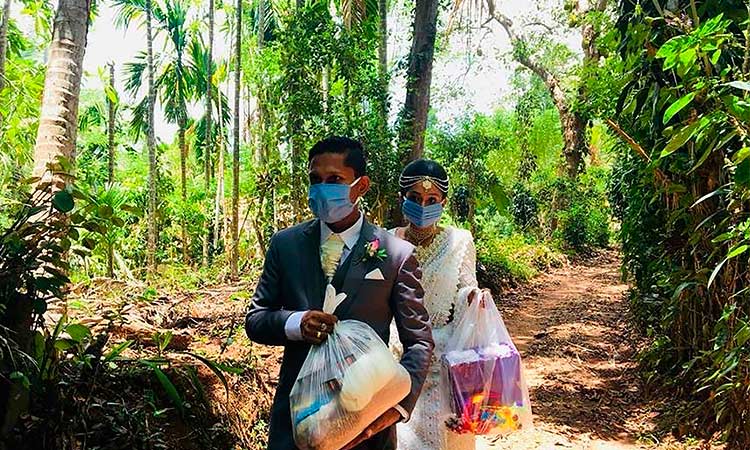 Darshana Kumara Wijenarayana and his bride walk with packets of food to distribute in the small town of Malimbada.

Like couples all over the world, Darshana Kumara Wijenarayana and his fiance, Pawani Rasanga, spent months planning a grand wedding

And everything was on course for the Sri Lankan couple - until the coronavirus struck the island nation off India's southern tip, leading to an indefinite lockdown. 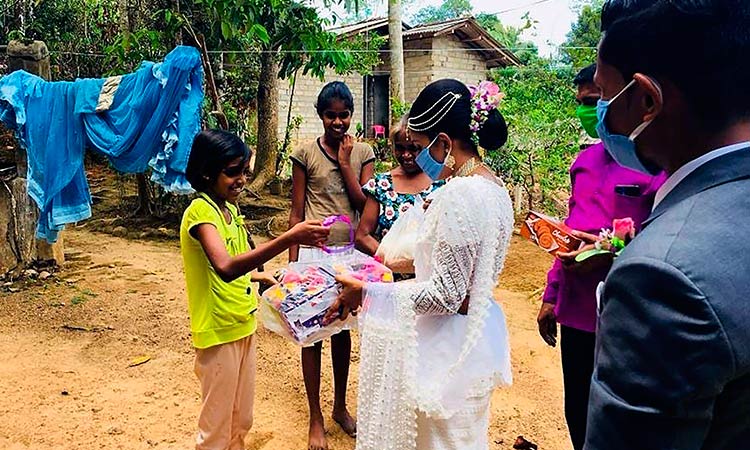 Pawani Rasanga hands a packet to a young girl.

"By that time, we had made all the arrangements. Clothes, rings and cakes had been ordered. The reception hall was booked. We had planned to invite 250 guests,” Darshana told.

Family and friends urged them to postpone their April 27 wedding.

Instead, the couple chose to celebrate their love by feeding the poor.

The first COVID-19 patient in Sri Lanka was a Chinese tourist who fell sick in January during her vacation. She was discharged in February.

Until the first week of March, there was little panic about the disease. Then on March 11, the first Sri Lankan - a tour guide - tested positive for the virus, triggering fear and the closure of schools and universities and many businesses. 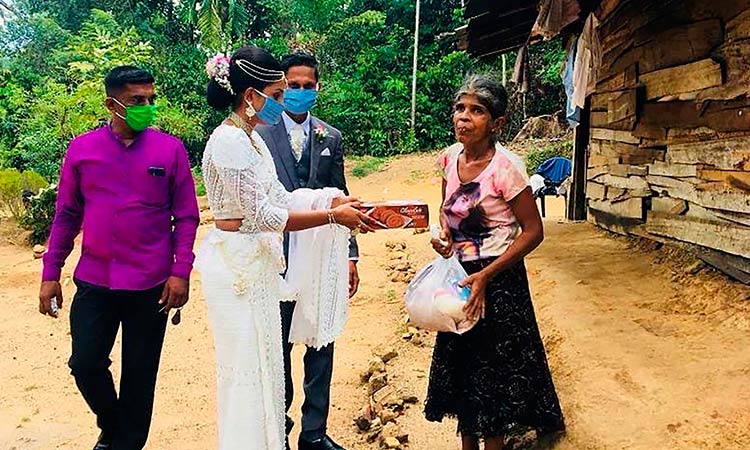 Pawani Rasanga hands a gift packet to an elderly woman.

The ongoing curfew has curbed the spread of the virus, but also dealt a severe blow to many who survive on a daily wage.

As the couple's wedding day approached, the local curfew was lifted during daytime hours, so they were free to host the wedding as planned, albeit under strict social distancing guidelines.

But they'd hatched another plan.

Darshana, the 30-year-old owner of a small retail shop, and Pawani, 25, a lab assistant at a state-run school, decided to share their wedding day with some of their neediest neighbors.

After registering the marriage with a few close family and friends, the couple cut the wedding cake and fed each other a piece before getting to work.

The groom wore a dark blue, three-piece, Western-style suit with an ivory tie and boutonniere, and the bride was in a white lace sari and a jeweled wedding headpiece with pink and purple flowers pinned above her chignon. 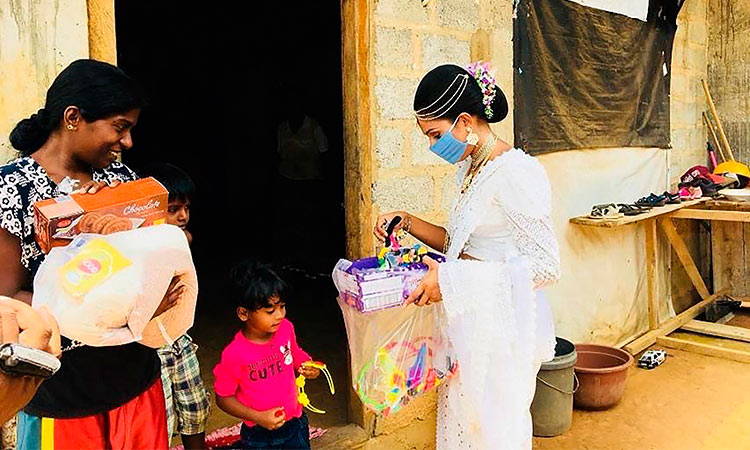 Pawani Rasanga hands a care package to a child in the small town of Malimbada.

Both wore masks as they delivered plastic bags of goods to each home, some built of uneven wooden planks on mud floors. Little girls and their mothers beamed at the bride as she distributed colorful plastic headbands; they offered the couple blessings for a happy married life.

Darshana and Pawani presented children with toy cars. They even offered slices of their cake. Then, they applied hand sanitizer and moved on to the next home.

They have since received a flood of phone calls and visits at their home and shop from strangers who praised them for their generosity.

"By doing this, we got a great satisfaction," Darshana said. "When you see the happiness on the face of these people, especially the kids ... you see .... I don’t have words to explain that happiness.”

While nonstop news about the effects of the coronavirus has become commonplace, so, too, have the stories about the kindness of strangers and individuals who have sacrificed for others.

His Highness Sheikh Humaid bin Rashid Al Nuaimi, Member of the Supreme Council and Ruler of Ajman has come to the aid of six orphaned Sudanese siblings, after their parents died from coronavirus within a month.