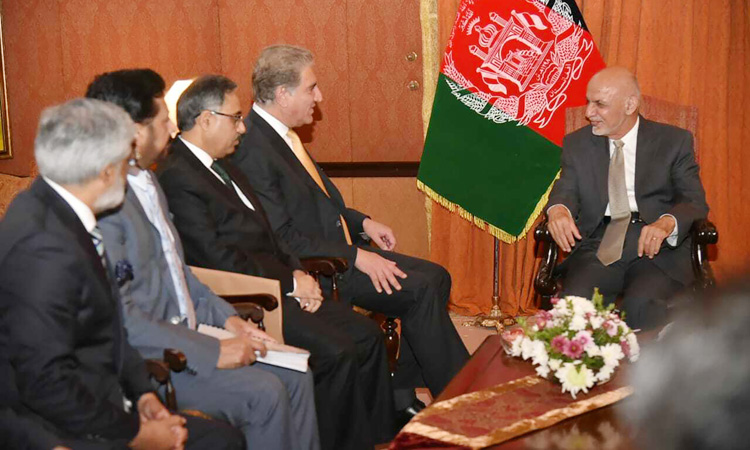 The Afghan president on Thursday praised Pakistan’s efforts to advance the peace process in the region as he reached out to Islamabad for help in bringing the Taliban to the negotiating table with the Kabul government, Pakistani officials said.

Ashraf Ghani’s remarks came at the start of his two-day visit to Pakistan, his first since elections that brought Prime Minister Imran Khan to power last year. The visit is also seen as an attempt by Ghani to reset the often-strained relationship between the two neighbours amid the stalled peace push with the Taliban.

He thanked Islamabad and “praised Pakistan’s role in the peace process,” according to a foreign ministry statement, as Qureshi assured Ghani that Pakistan will continue to extend its full support to the ongoing efforts.

Ghani is also scheduled to meet with President Arif Alvi before traveling to the eastern city of Lahore to attend a gathering of businessmen.

The visit comes after dozens of Afghan political leaders attended a peace conference in Pakistan last week to pave the way for further Afghan-to-Afghan dialogue. Pakistan has facilitated ongoing peace talks between Washington and the Taliban as US envoy Zalmay Khalilzad is trying find a negotiated exit to the 17-year war in Afghanistan.

The Taliban have refused to talk directly with Kabul, considering it a US puppet. The insurgents, however, say they will sit down with any Afghan, even a government official, but as an ordinary citizen and not as a government representative.

An earlier attempt at restart Afghan-to-Afghan talks was scuttled after neither side could agree on the list of participants.

Khan has been a strident critic of Islamabad’s previous participation in Washington’s so-called war on terror. However, he promised after winning the polls last July that his government would be “partners in peace,” and since then, has said Islamabad would do whatever is needed for the success of the peace process.

Ghani’s visit comes ahead of the next round of talks on Saturday between the Taliban and Khalilzad in Qatar, where the insurgents maintain a political office.

Since being appointed in September, Khalilzad has met with all sides, including the Taliban, Afghan officials and Pakistan’s political and military leaders. The Taliban currently control nearly half of Afghanistan, and are more powerful than at any time since the 2001 US-led invasion.