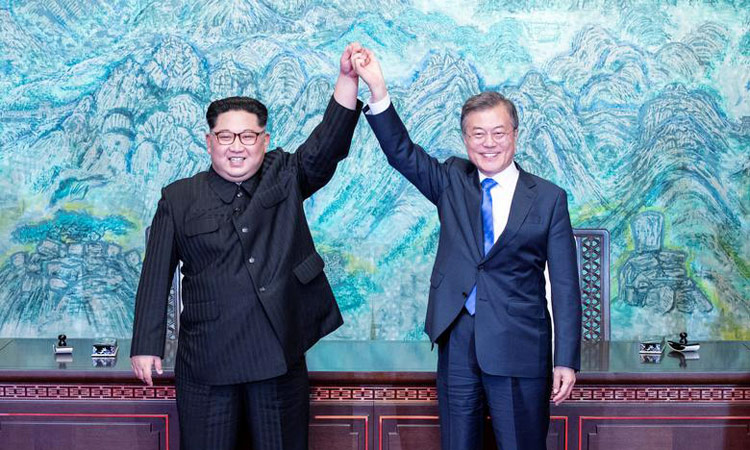 Kim Jong Un and President Moon Jae-in held their first meeting on April 27 last year in the Demilitarised Zone dividing the peninsula amid a rapid diplomatic thaw, paving the way for a historic summit between Kim and US President Donald Trump in Singapore in June.

Since Hanoi, the North has not attended any of the weekly meetings of the heads of their joint liaison office in Kaesong, and has not taken part in other joint projects.

North Korea did not respond to the South’s invitation this week for a ceremony later on Saturday at Panmunjom — where Moon and Kim exchanged warm smiles and hugs — to commemorate their landmark meeting last year.

Instead, the North’s Committee for the Peaceful Reunification of the Country, which handles inter-Korean relations, urged Seoul Saturday to take “more active measures” to improve ties.

The Kim-Moon summit a year ago had restarted the “ticking of the reunification clock”, it said, but the US was pressuring Seoul to lock steps in their approach towards the nuclear-armed North.

Moon and Kim met three times last year — including a second impromptu encounter after Trump threatened to cancel the Singapore summit just weeks before it was due.

But exchanges between Seoul and Pyongyang have significantly decreased since the failure to reach agreement in Hanoi.

Kim slammed the South in a speech to his country’s rubber stamp legislature earlier this month, saying it should not “pose as a meddlesome ‘mediator’ and ‘facilitator’” between the US and the North.

At his first summit with Russian President Vladimir Putin this week, Kim accused the US of acting in “bad faith” in Hanoi and warned the situation “may return to its original state.”