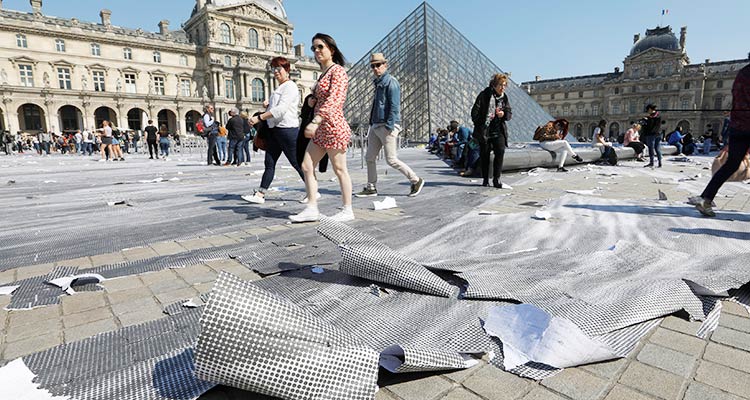 Visitors walk on a giant artwork by French artist JR around the glass pyramid.

PARIS: A whimsical collage in the courtyard of France's Louvre art museum had a short shelf life after a swarm of tourists and art lovers left it in shreds.

French artist JR and 400 volunteers put the final touches to the huge collage on Friday to mark the 30th anniversary of the Louvre's glass pyramid.

On Saturday he tweeted a photo of the 17,000 square metre (183,000 square foot) work which, from a certain angle, made the pyramid appear to extend deep into a quarry of white rock, and invited the public to come take a look.

Come they did, and within a few hours the fragile 2,000-odd sheets of paper were torn to pieces, returning the site to its natural state in what could almost be called a work of public performance art.

Art lovers were not amused however, and some expressed themselves on Twitter with comments such as "really disappointing bad experience today for the Louvre pyramid's 30th anniversary". 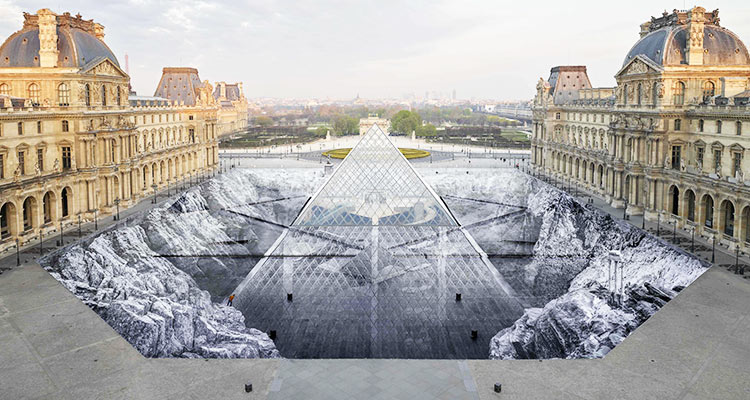 The huge collage by French artist JR in the courtyard of the Louvre.

Another noted that "JR's art piece was more fleeting than foreseen."

The artist was more philosophical Sunday. "The images, like life, are ephemeral," he tweeted.

"Once pasted, the art piece lives on its own. The sun dries the light glue and with every step, people tear pieces of the fragile paper. The process is all about participation of volunteers, visitors, and souvenir hunters."

"This project is also about presence and absence, about reality and memories, about impermanence," he added.

Three years ago JR, whose real name is Jean Rene, gave the pyramid a very different treatment, covering it in a giant trompe-l'oeil that made it seem like it had disappeared.