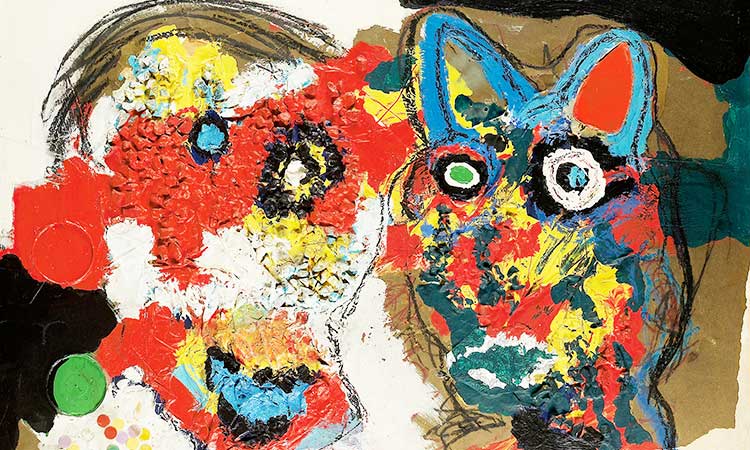 Opera Gallery, Dubai, is presenting a new virtual exhibition featuring Karel Appel, one of the most influential Dutch artists of the latter half of the twentieth century. Oscillating between realism and an emotionally charged, robustly active and spontaneous abstraction, Appel adopted a material-oriented approach in his practice and promoted a genuine form of expression.

Across a nearly six-decade career, he established a distinct aesthetic. Born in 1921 in Amsterdam, Netherlands, he studied in the 1940s at the Rijksakademie van Beeldende Kunsten. After leaving the Netherlands in the 1950s, he travelled extensively and lived and worked in New York and Europe. He passed away in 2006 in Zürich, Switzerland.

A founding figure of CoBrA (from Copenhagen, Brussels, Amsterdam) in 1948, a movement that rejected rationalism and geometric abstraction, Appel experimented widely, across painting, sculpture, drawing, and stage design, distinguishing himself for his astonishing capacity to innovate.

He never settled in a signature style, media or subject. Going beyond his classical, academic training, he looked at folk art as well as the uninhibited work of children and the mentally ill, while also drawing from jazz’s spirit of improvisation. He was also an avid sculptor and has had works featured in Museum of Modern Art and other museums worldwide.

As a child he was often called ‘Kik’. At fourteen, he produced his first real painting on canvas, a still life of a fruit basket. For his fifteenth birthday, his wealthy uncle, an avid amateur painter himself, gave him a paint set and an easel.

From 1940 to 1943, during the German occupation, while Appel studied at the Rijksakademie van Beeldende Kunsten in Amsterdam, he met the young painter Corneille and some years later, Constant; they became close friends for years.

His parents opposed his choice to become an artist, leading him to leave home; this was also necessary because he needed to hide from the German police so that he would not be picked up and sent to Germany to work in the weapons industry.

Appel had his first show in Groningen in 1946. In 1949 he participated with the other CoBrA artists in the Stedelijk Museum Amsterdam; this generated a huge scandal and many objections in the press and public. 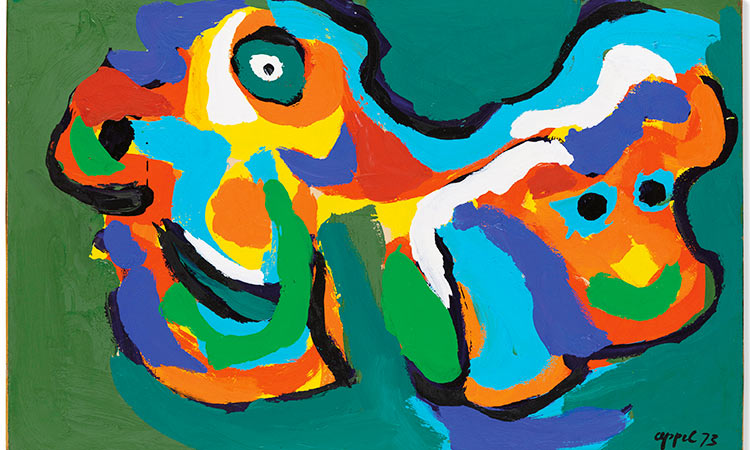 He was influenced by Pablo Picasso, Henri Matisse and the French brute-art artist Jean Dubuffet. In 1947, he started sculpting with all kinds of used materials (in the technique of assemblage) and painted them in bright colours: white, red, yellow, blue and black.

In 1948, Appel joined CoBrA together with the Dutch artists Corneille, Constant, Jan Nieuwenhuys and with the Belgian poet Christian Dotremont. The new art of the CoBrA group was not popular in the Netherlands; but it found a warm and broad welcome in Denmark. By 1939, Danish artists had already started to make spontaneous art and one of their sources of inspiration was Danish and Nordic mythology.

It was also in Denmark that the CoBrA artists started cooperating by collectively painting the insides of houses, which encouraged and intensified the exchange of the typical ‘childish’ and spontaneous picture language used by the CoBrA group.

Appel used this very intensively; his 1949 fresco ‘Questioning Children’ in Amsterdam City Hall caused controversy and was covered up for ten years.

As a result of this controversy and other negative Dutch reactions to CoBrA, Appel moved to Paris in 1950 and developed his international reputation by travelling to Mexico, the USA, Yugoslavia and Brazil. He also lived in New York City and Florence. His first American gallery exhibition took place in 1954 at the Martha Jackson Gallery.

He is particularly noted for his mural work. After 1990, he became much more popular in the Netherlands; he had several big shows in Amsterdam and Brussels. Also, the CoBrA museum in Amstelveen organised several shows featuring his work. He became the most famous Dutch CoBrA artist of his generation.

Appel’s work has been exhibited in a number of galleries, including the Anita Shapolsky Gallery in New York City, Galerie Lelong in Paris, Galerie Ulysses in Vienna and Gallery LL in Amsterdam.

Years before his death, he established the Karel Appel Foundation, whose purpose is “to preserve (Appel’s) artworks, to promote public awareness and knowledge of Karel Appel’s oeuvre, and to supervise publication of the Oeuvre Catalogue of the paintings, the works on paper, and the sculptures”.

Opera Gallery was the first international gallery to open its doors in Hong Kong in 2004. Today, it utilises its global network to source and cultivate contemporary artists from around the world, and supports artists in annual exhibitions and art fairs programmes.