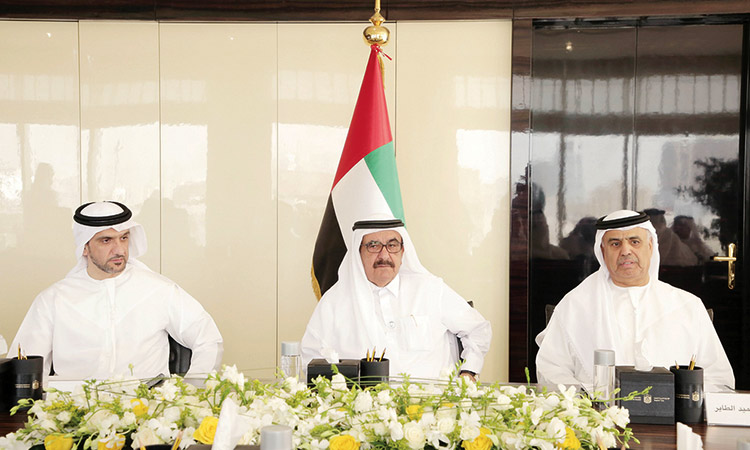 Business Bureau, Gulf Today
The Board of Directors of the Federal Tax Authority (FTA) held its ninth meeting with FTA Chairman Sheikh Hamdan Bin Rashid Al Maktoum, Deputy Ruler of Dubai, UAE Minister of Finance, at the Ministry of Finance’s headquarters in Dubai, in the chair.

The Board looked into the performance of the FTA’s various systems, which facilitate registration, the submission of Tax Returns, and refunding tax to legally eligible groups through multiple Schemes, including the VAT refunds for nationals building new residences in the UAE, the Tax Refunds for Tourists Scheme, and the VAT Refunds for Business Visitors.

The FTA Board of Directors ratified the Authority’s financial statements for 2017 and 2018, and approved several executive decisions regarding the FTA’s internal regulatory and administrative policies and operations. Attendees at the meeting then went on to showcase the Authority’s recent accomplishments, where various tax schemes have exhibited improved performance, and the number of businesses and tax groups registered for VAT surpassed 307,000, while the number of those that registered for Excise Tax totalled 724.

Furthermore, the figures revealed that the user base for the tax system is expanding rapidly, which compelled the Authority to authorise more than 123 clearing and forwarding companies, increase the number of accredited Tax Agents to 395, and commission 28 accredited tax accounting software vendors.

Sheikh Hamdan Bin Rashid Al Maktoum applauded the FTA’s performance and achievements, which were also lauded by experts, as well as local and international institutions. He went on to highlight the Authority’s efforts to achieve the tax system’s stated developmental, economic, and social objectives, citing the strategic partnerships the FTA has forged with government and private entities, which catalysed the drastic increase in self-compliance rates and in tax awareness among taxpayers and the public.

“The tax system has begun achieving many of its main objectives, most notably the diversification of the UAE’s resources,” he added. “This allows us to continue providing high-quality services for future generations, in line with the UAE Vision 2021 and its objectives to build a sustainable ecosystem and integrated infrastructure.”

The data presented during the meeting of the Board of Directors attests to the success of the Authority’s activities and services, launched to ensure the happiness of the UAE’s citizens, residents, visitors, and tourists, Sheikh Hamdan asserted, adding: “VAT refunds for nationals building new residences in the UAE has achieved positive results, reflecting our commitment to implementing the leadership’s vision to develop a modern housing system for Emirati citizens that ensures their wellbeing and living conditions. UAE Nationals are at the heart of all development plans and are the main objective of all initiatives and projects carried out by government institutions.”

On another note, he noted: “The Tax Refunds for Tourists Scheme has been a great success since it went into effect, contributing to an increased flow of tourists at the UAE’s entry ports. The number of retail stores connected to the Scheme’s electronic system has grown steadily, and tourists from around the world have praised the system.”

“Meanwhile, the VAT Refunds for Business Visitors has been implemented to great success,” he added. “Eligible applicants were able to refund the Value Added Tax they incurred, which helps strengthen the economic sectors that visiting businesses to the UAE are typically involved in. This, in turn, further establishes the UAE as an attractive environment for investments.”

The FTA Board of Directors explored the figures of the VAT refunds for nationals building new residences in the UAE, which revealed a significant increase in the rate of refunds and the speed of processing applications submitted by UAE citizens through clear and accurate online procedures. This adheres to the wise leadership’s directives to ensure housing stability for Emirati nationals.

The figures went on to show that 563 applications were adopted by July 2019, where applicants refunded the tax they incurred on the construction of their residences. The total refunded value was Dhs25.23 million, up from 235 applications worth Dhs9.76 million recovered in the first quarter of 2019. This amounts to a staggering increase of 158.5% in the value of recovered tax and 139.6% in the number of applications adopted. The last three months alone (in addition to the first half of July) saw the adoption of 328 new applications worth Dhs15.5 million.

Meanwhile, data about the Tax Refunds for Tourists Scheme indicated that the number of retail outlets linked to the system has exceeded 10,000 stores across the country, and the number of tax refund applications processed per day has doubled to more than 7,500, judging by the number of ‘tax refund’ stickers issued by participating retail outlets. This is a significant increase from the 3,800 transactions per day reported in the early days of implementing the system, which went into effect in November 2018.