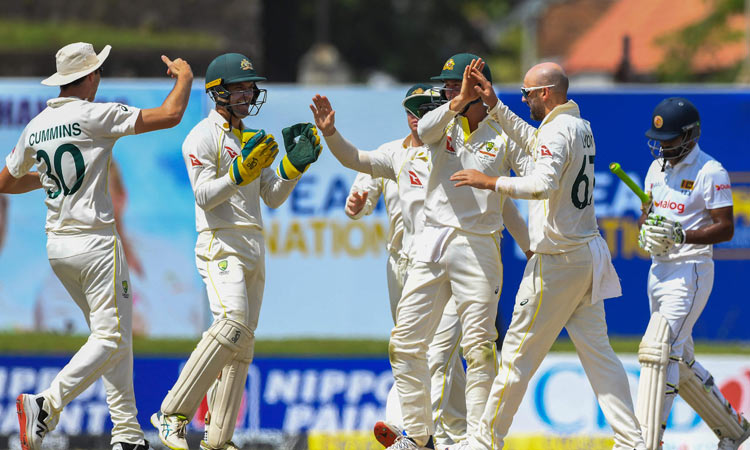 Spinners Travis Head and Nathan Lyon took four wickets each to give Australia a 10-wicket win over Sri Lanka in the first session on the third day of the first cricket test on Friday.

Opting to bat first after winning the toss, Sri Lanka made 212 in its first innings.

Australia was still batting in its first innings when play resumed on the third day on 313-8 and fast bowler Asitha Fernando bowled Pat Cummins (26) with a yorker. Fernando later sent an in-swinger to bowl Mitchell Swepson (1) to end Australia’s first innings at 321, conceding a 109-run first-innings lead.

Sri Lanka made only 113 runs in its second innings leaving Australia five runs to win and David Warner finished the match in four balls.
Head, bowling his part-time off spinners, took four wickets in the space of 17 deliveries to return 4-10. He had not taken a wicket in the 26 previous test matches.

Lyon continued his good form, taking 5-90 in the first innings to return 4-31 in the second.

Sri Lanka started its second innings briskly with the intention of wiping out the deficit quickly on a pitch that helped spin bowlers.

Kusal Mendis and Oshada Fernando, who came into the match as a replacement for Angelo Mathews who had tested positive for COVID-19 earlier in the day, shared 20 runs for the third wicket before Mendis top-edged a sweep for a catch to Swepson at square leg.
Fernando (12) edged Swepson to Steve Smith at slip to leave Sri Lanka 63-4.

Cameron Green (77) and Usmal Khawaja (71) made half-centuries for Australia in the first innings. Off spinner Ramesh Mendis bowled best for Sri Lanka with 4-107.