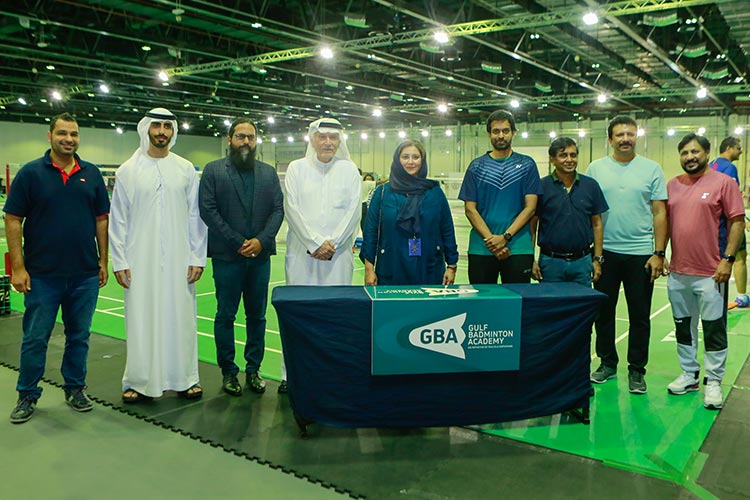 Pullela Gopichand, Lina Al Maeena and other dignitaries pose for a picture after signing MoU at the Dubai Sports World.

Under the mentorship of former All England Champion Padma Bhushan Pullela Gopichand, Gulf Badminton Academy (GBA) plans to open multiple academies in and around their Dubai hub and the GCC, aiming to take badminton to further heights.

"We are committed to providing extensive in-person training, online resources, and ongoing support to help launch and grow the Badminton sport in the Arab world," says Gopichand, Chairman of Gulf Badminton Academy, UAE, after signing an MOU at Dubai Sports World with Jeddah United Sports Club, represented by Lina Al Maeena, to expand the badminton training facility to Saudi Arabia.

GBA, after testing success in five centres for the past eight months in Dubai with around 100 kids and adults, is expanding to Saudi Arabia through a strategic partnership with Jeddah United Sports Club.

“The driving force behind the concept of GBA is Gopichand, who has incredible credentials not only as a great sportsman but also as a great coach, spending every moment of his career promoting the sport of badminton through his academy, which has produced world-class talent,” said Thoffik Valiyakath, Managing Director of GBA.

“We are targeting three major cities in Saudi with our own badminton centers to produce future badminton talents, including for Saudi women’s badminton training.

“The initiative effectively contributes to spreading the game of badminton among women's sports in Saudi Arabia, as well as increasing and expanding the number of players practicing the game,” said Lina, Co-Founder of Jeddah United Sports Club.

“In addition, it will also attract talented players from Saudi to include them in the men's and women's teams and prepare them to represent the country in international tournaments abroad.”