Handball coaches and sports personalities honoured by Marzouqi in a ceremony 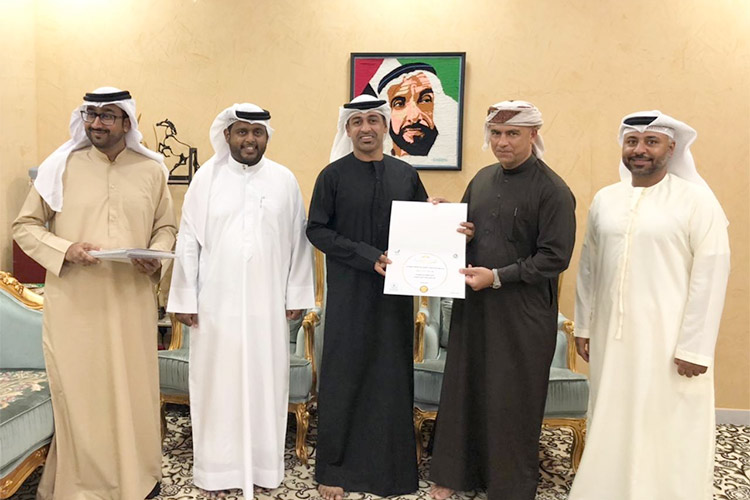 Handball coaches of first division clubs pose for a picture during the presentation ceremony.

The ceremony was held at Marzouqi’s majlis, inside his house in Al Warqa, Dubai.

A number of players and handball coaches from first division clubs attended the event where 50 sports personalities were honoured.

The initiative was aimed at appreciation of the sports personalities, and acknowledges their contributions to the game.

Marzouqi has officiated matches at the 2012 London Games, the 2016 Rio Olympics and a number of regional and international competitions.

Mohammed Matter Ghorab, technical analyst, said: “It is important to make sure the right atmosphere is created for the national coaches in the first division league, which gives them the opportunity to play a positive role.”

Moataz Abdullah, Al Jazeera Al Hamra’s coach, spoke on the importance of changing the mechanism of the hiring process for players.

“Taking into account the need to work on related options that began 14 years ago, rather than 19 or 20 years ago, so that these players have a chance to learn our culture, as they will be the future of national teams.

“About 20 years ago, Mohammed Matter Ghorab, a technical analyst, called for working on a correct and professional mechanism for hiring the resident players and the importance of their presence in the country.”

Mohammed Jalbut, Al Arabi club coach, said: “Having just six coaches in the first division is not enough, as it is important to give them the appropriate opportunity to show their abilities.”

He said that some club administrations in the first division raise the level of their expectations just because the first team succeeded in winning the competition, which is burdening the coaches.

Abd Al Ghani Al Mahri, coach of Masfut club, expressed surprise over the quick dismissal of the trainers, given the decline in results and the turning a blind eye towards the managers, who are not affected by such decisions.

He explained that the vision must be professional and scientific for the role of the trainer, and that he should be appreciated for his positive efforts.

At the conclusion of the ceremony, trainers and sports personalities were honored by Marzouqi in the presence of Mohammed Saeed Al Naqbi.

The coaches and trainers also received certificates of recognition from the Emirates Media Vision Network.