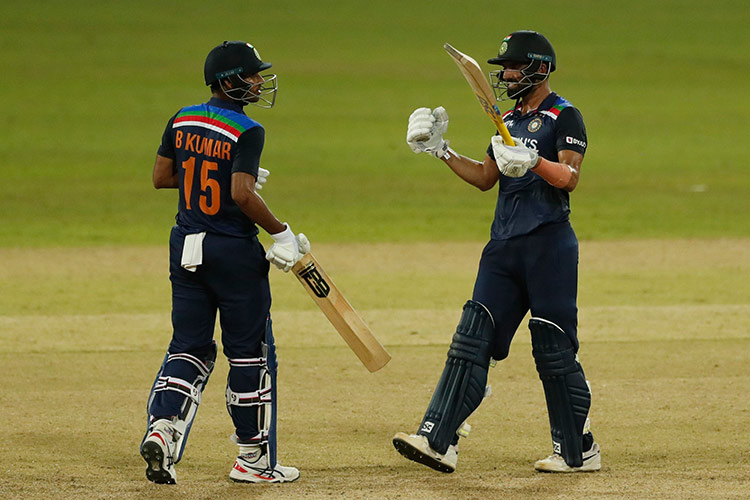 India's Deepak Chahar (right) and Bhuvneshwar Kumar cheer each other during their match against Sri Lanka in Colombo, Sri Lanka, on Tuesday. AP

Deepak Chahar produced a scintillating all-round performance as India defeated Sri Lanka by three wickets in second ODI to take an unassailable 2-0 lead in the three-match series on Tuesday.

Chahar, after taking two wickets, struck an unbeaten 69 to as India reached the target of 277 for the loss of seven wickets with five balls to spare.

Chasing, India got off to a shaky start as they lost their wicket with just 28 runs on the board.

They lost two more wickets at regular intervals and were reduced to 65/3 in 13 over.

With three wickets down, India needed someone to play a sheet anchor role. Manish Kumar and Suryakumar Yadav added 50 runs for the fourth wicket to bring the faltering innings back on track.

But a double blow in the 18th over left India reeling as Shanaka rattled the stumps of Manish, who was found short of crease.

India were in deep trouble and needed looked set to lose the match as Lanka started fancying their chances.

Krunal Pandya and Chahar revived the innings with a vital partnership to take the corecloser to the target.

Krunal was clean bowled by De Silva before Chahar and Bhuvneshwar shared an unbeaten 85-run partnership for the seventh wicket to take the tourist over the line.