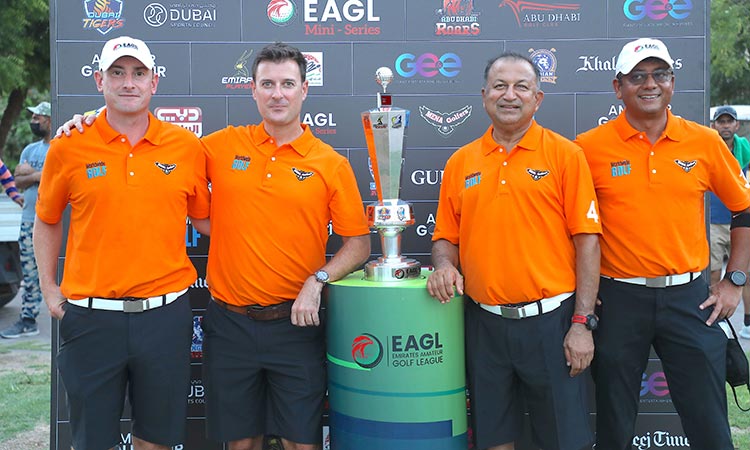 Members of the Mena Golfers team pose with the trophy.

“It was a fantastic day and the set up at the event was phenomenal,” said Mena Golfers team captain Rick Bevan. “It really did feel like a Tour event with TV towers on every hole, lots of media in attendance and just a very professional feel to proceedings. But there was also an emphasis on fun and entertainment with nice touches like walk on music for all the teams on the first tee which really set the tone for the day. The guys put in a wonderful performance and it’s great to be the first winners of an event that has a very big future.”

The Mena Golfers were up against the Asian Jumbos, captained by Dubai Eye’s Robbie Greenfield, and they got off to a strong start in Match 2 with Deepak Jain beating Bayern Khan 3&1. All matches featured an additional ‘press match’ where the remaining holes were played out if the match finished before the 18th, with an additional point up for grabs for the winner. The pair halved their press match, meaning it was 2 points on the board.

In Match 7 Mena Golfers’ Ashok Kumar beat Rohit Kashal 3&1 and then won the press match 1-up to contribute a sensational 3 points while in Match 9 Zubair Firdaus replicated the feat by beating Wayne Platts 4&3 before adding another point with a 2&1victory in the press. The emphatic team display was rounded off in Match 13 where Craig Vance won his match against Paul Murnaghan 3&2 before halving the press, giving the Mena Golfers team 10 points from a possible 12.

“It's been very enjoyable, the environment that the guys have created with all the spectators and cameras, they make it feel like a professional event which is great and I'm sure it will bring a lot of eyes to the game and grow the game of golf in the region,” said 18 year old Firdaus who is off to the US this summer to begin a golf scholarship at San Jose State University. “It's pretty much my dream to play college golf and one day become a professional so I am looking forward to that.”

The event welcomed a prestigious guest in the form of European Tour pro Shiv Kapur, who is an EAGL Ambassador, and the Indian star, who has plenty of experience playing in pro events, was impressed with what he witnessed: “I think it's fantastic to be able to replicate what a proper tournament feels like,” said Kapur. “I was feeling some butterflies on the first tee, so I can imagine what the amateurs were going through; to be live on TV and the nerves that they feel, it's very different from Pro-Am. The whole idea of EAGL was to give them the experience of pro tournaments for team competitions so it's kind of like the Ryder Cup and a Tour event all in one.

“I have never seen amateur golf like this, not even professional golf across the world. The idea is that team golf is always more exciting than individual formats; the colourfulness, the uniforms, you are playing for a team, it's a nine-hole shootout…It's very exciting and I think it's here to stay.”

Founder and CEO of EAGL, Sudesh Aggarwal was relieved and happy to have pulled off such an ambitious project.

“It has been quite a challenging thing to do, with the course setup and managing everything, particularly being the first of its kind in the world in amateur golf,” said Aggarwal. “But it has also been very satisfying and interesting. Everybody's so happy, including the course management, they have never seen anything like it.” 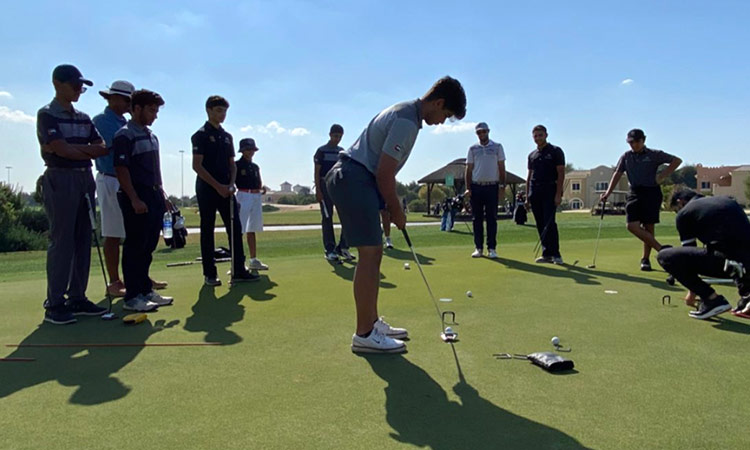