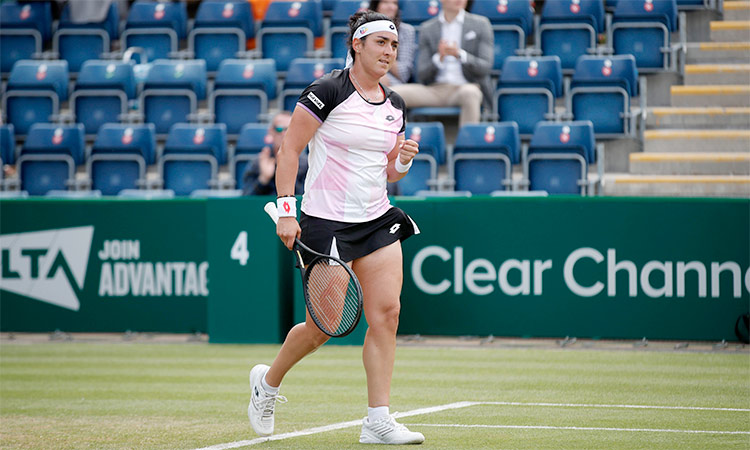 Ons Jabeur celebrates after winning her semi-final match against Heather Watson at the Birmingham Classic tournament on Saturday. Reuters

The Tunisian eliminated home favorite Heather Watson, who earlier in the day became the first British woman since 1992 to reach the semifinals in Birmingham.

The four quarter-finals were rained out Friday. Watson advanced to the semifinals by upsetting third-seeded Donna Vekic of Croatia 6-4, 6-2. The last British woman to reach the semifinals was Jo Durie in 1992.

World number seven Andrey Rublev is into his first grass court final on the ATP tour after beating Georgian qualifier Nikoloz Basilashvili in the last four at Halle on Saturday.

In Sunday’s final, Rublev will meet Ugo Humbert, who beat Canadian Felix Auger-Aliassime 6-4, 3-6, 7-6 (7/5) in the other semi-final later Saturday.

Top seed Matteo Berrettini says he hopes he does not sleep too well ahead of Sunday’s Queen’s tournament final after beating Alex de Minaur 6-4, 6-4 in the semi-finals on Saturday.

The 25-year-old Italian has yet to drop a set on his debut at Queen’s and although Australian number one De Minaur gave him a good workout he had too much power for his opponent.

Berrettini has beaten two Britons on his way to the final -- Andy Murray and Dan Evans -- and will have to beat another Cameron Norrie if he is to lift the trophy.

An early break for Berrettini in the first set over the fourth-seeded De Minaur and then at 4-4 in the second was sufficient to seal his place in the final of the key warm-up tournament for Wimbledon.

Samsonova, 22, will face world number 12 Belinda Bencic for the title on Sunday after her 6-4, 6-2 win over Azarenka.

She is the fifth qualifier to reach a singles final on the WTA this season and will comfortably make her Top 100 debut next week.

Switzerland’s Bencic, seeded fifth, ended the run of Alize Cornet to progress to the final with a 7-5, 6-4 win.

Bencic improved to 3-1 against Cornet as her victory placed her into the fourth grass-court final of her career.

Bencic won the 2015 Eastbourne title for her best-ever grass-court result on tour.

France’s Cornet, 63rd in the world, reached the last four after an upset win over former Wimbledon champion Garbine Muguruza.