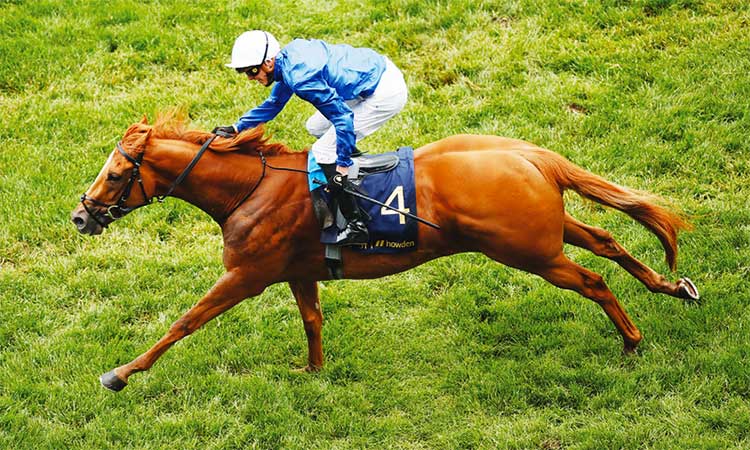 Tackling seven furlongs for the first time, Creative Force (James Doyle) was covered up towards the rear of a group led by Storm Damage (Andrea Atzeni) down the centre of the course, with Naval Crown (William Buick) heading the runners on the stands’ rail.

Creative Force quickened to take up the running on his side a furlong and a half from home and pressed Naval Crown for the overall advantage entering the final furlong, despite drifting towards the stands’ side.

Both sons of Dubawi battled for the lead, with Creative Force asserting as he straightened up in the closing stages for a length and a quarter verdict over his stable-companion.

It was a fourth straight victory this year and first Group-race success for Creative Force, whose only career defeat in six starts came in the G2 Coventry Stakes at Royal Ascot last season.

Charlie Appleby said: “We were hopeful on Creative Force’s pedigree and what he has shown us at home in his attitude that stepping up to seven furlongs would be within his realm, and he has gone and duly obliged today.

“James Doyle has given him a lovely ride. He knew he had to sit a bit patiently on him stepping up over this trip and on this ground, and as James said on his way in, a very brave horse. I’m delighted first and foremost for the team - it’s great to get a second winner on the board this week.

“Often people say, why do you run two horses together but you have got to give yourself the best chance of winning, and you’ve got two brave horses there. William Buick gave Naval Crown a great ride - he came out and said, I’d like to bag that rail and ride my race from there, and he did everything right. He just came up against a very willing character there coming up the middle in Creative Force, so I’m delighted to have the one-two.

“I think we’ll probably look at something like the G1 Prix Maurice de Gheest, dropping back half a furlong to six and a half furlongs. Creative Force has bags of pace, travels and picks up well, so I think that will be a nice race there to suit his profile. Potentially, the likelihood is the same for Naval Crown - they might just have to take each other on again and see if we can reverse the form,” said Doyle.

Meanwhile, Dream of Dreams gave trainer Michael Stoute a record-extending 82nd Royal Ascot winner as he landed the feature race the Diamond Jubilee Stakes on the final day of the meeting on Saturday.

One of those owners, for whom 75-year-old Stoute has trained a Royal Ascot winner, Queen Elizabeth II was present for the first time this week and received a roar from the 12,000 spectators as she stepped from her limousine.

Unlike Stoute she finished the day without a winner -- Reach For The Moon finishing second in the opening race and King’s Lynn an unlucky third in the Wokingham Handicap.

She and Stoute chatted away after Dream of Dreams had finally cracked the Diamond Jubilee after finishing runner-up in the previous two runnings.

“I thought I wasn’t going to have a Royal Ascot winner this year -- this is the last runner we’ve got,” said Stoute, whose previous win in the race was 1985.

Frankie Dettori also had an audience with the Queen after finishing second on Reach For The Moon talking her through how the horse had run.

The 50-year-old Italian then had to give second best to champion jockey Oisin Murphy in being leading jockey of the meeting. Murphy rode his fifth winner of the week on Foxes Tales owned by the Thai owners of Leicester City.

The family brandished a photo of their late patriarch Vichai Srivaddhanaprabha, who was killed in a helicopter crash in October 2018 and who had begun the investment in racehorses.

Murphy said his first thoughts were for 15-year-old rider Tiggy Hancock, who died on Wednesday following a riding accident in Ireland.

She returned after eight months off the track to win the Hardwicke Stakes.

For her owner Chris Wright -- who co-founded Chrysalis Records in 1968 -- it was a landmark day after years of owning racehorses.