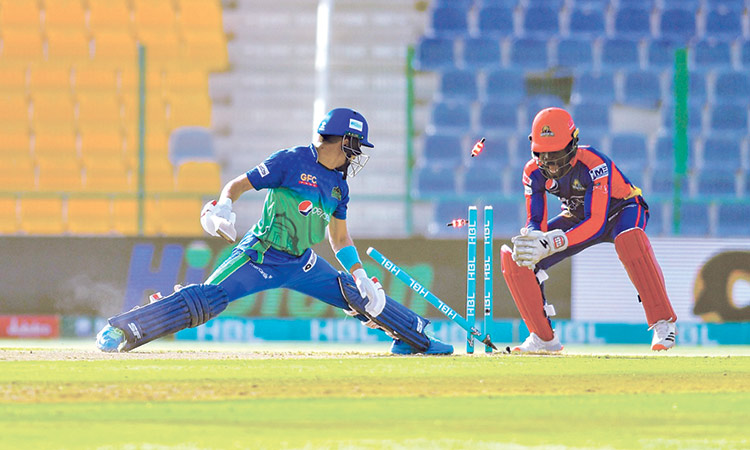 Action from the match between Multan Sultans and Karachi Kings during their PSL match on Thursday.

Three wickets from Imran Khan and 44 each from Khushdil Shah and player of the match Rilee Rossouw powered Multan Sultans to a 12-run win over Karachi Kings in the Pakistan Super League (PSL) match at the Sheikh Zayed Cricket Stadium in Abu Dhabi on Thursday.

Sultans also became the second side after Quetta Gladiators to defend a total in the ongoing season as they restricted Kings to 164 in their pursuit of 177.

Kings had a poor start to their run-chase as they lost Sharjeel Khan (four off six) in the fourth over with just 14 runs on the board. They managed only 31 in the batting powerplay and hit only a six and a four in the first six overs, as reported by PSL on their website.

Martin Guptill failed to make his PSL debut a memorable one as he managed 11 off 16 balls. Najibullah Zadran (11 off six, one six) followed Guptill when he fell to Imran Tahir in the 12th over, leaving Kings reeling at 77 for three with 100 runs still required from eight overs.

Chadwick Walton joined Babar and the pair stitched a 77-run partnership off 45 balls for the fourth wicket to give Kings a chance to cross the line, but they failed to control the surging required run-rate.

During the course of the Kings innings, Babar struck his 18th half century in PSL and returned unbeaten on 85. His 63-ball innings was studded with five fours and four sixes. The right-handed Walton scored 35 off 23, and hit four fours and a six.

Earlier, after being put into bat by Kings’ captain Imad Wasim, the Sultans got off to a flying start despite losing opener Rahmanullah Gurbaz (three off four) to Imad in the first over of the match.

Right-handed Sohaib contributed 31 off 14, which included five fours and a six. He collected 21 runs from Imad’s second over – third of the innings – smashing the left-arm spinner for three fours and a six. He was bowled in the next over as he chopped on left-arm pacer Waqas Maqsood on the final ball of the fourth over with the total on 40.

After the departure of Sohaib, Rizwan was joined by Rossouw who kept the scoreboard moving and never let the run-rate go down under 10. The left-hander struck seven boundaries in his 24-ball 44.

The induction of Thisara Perera in the 11th over of the match put breaks on Sultans’ free flow of runs as he conceded only two runs in his first over and got the prized wicket of Rossouw. Rizwan (29 off 23, two fours, one six) got run out in the same over.

The departure of both set batsmen dried up the runs for Sultans as it took 34 balls for them to strike a boundary after Rossouw’s dismissal.

That the Sultans managed to score 176 for five was largely because of late onslaught from young left-handed batsman Khushdil who returned undefeated on 44 off 32, hitting three fours and two sixes. He contributed an unbeaten 48 off 32 for the sixth wicket with Sohail Tanvir (14 off 14, one four). The pair collected 19 runs of the final over of the innings bowled by Mohammad Amir.

For Kings, Perera was the most successful bowler with two for 12, while Imad and Waqas took a wicket each.

Earlier, the sixth edition of the PSL resumed with a thrilling contest as Lahore Qalandars – the finalists of the 2020 tournament – sealed a five-wicket win over 2016 and 2018 champions Islamabad United on the final ball on Wednesday. This was Qalandars’ just third win over United in 11 matches and took them to the top of the points table.

Qalandars chased down a tricky 144 at Sheikh Zayed Cricket Stadium in Abu Dhabi thanks to Rashid Khan who smashed Hussain Talat for three fours in the last over. Qalandars required 16 from six when Shadab Khan, the United captain, brought Hussain into the attack to deliver his only over of the match. 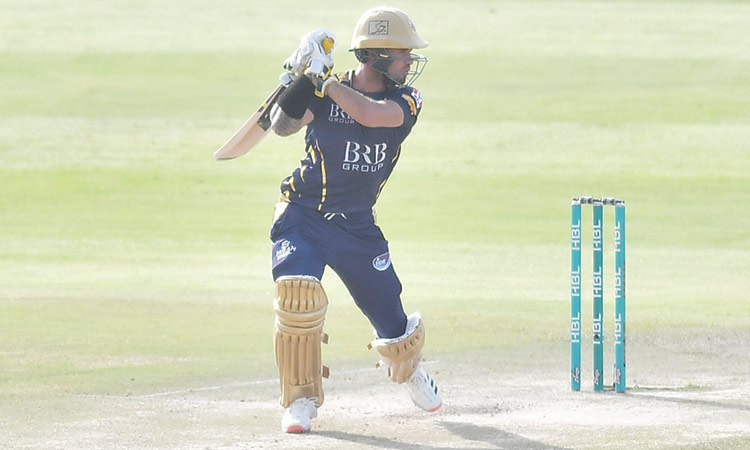