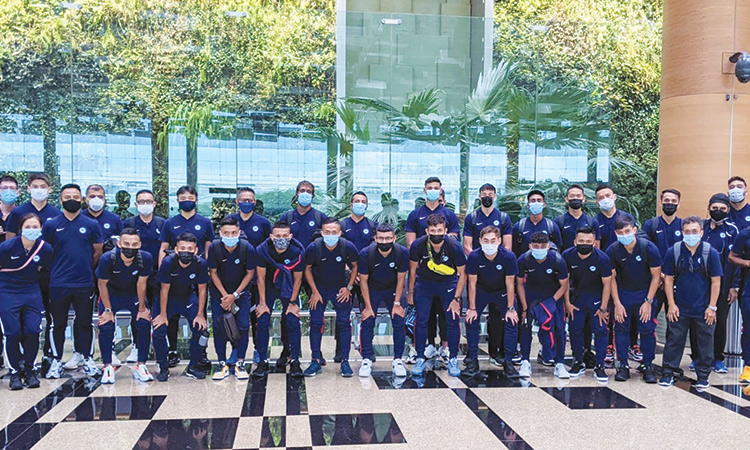 As part of preparations for the Asian Qualifiers, Singapore will play Afghanistan in a closed-door training match in Dubai on Saturday. File

The Indian football team is not here for next month’s FIFA World Cup Qualifiers to just “make up the numbers”, but to make a mark, midfielder Anirudh Thapa pointed out on Wednesday.

The Sunil Chhetri-led Indian team will play its opening game against Qatar on June 3, followed by matches against Bangladesh and Afghanistan on June 7 and 15, respectively.

“We understand that Qatar are eagerly looking forward to the match. But we know that we will try to do well on the field.

“We don’t want to be disappointed. We are not there to make up the numbers. We are confident in our abilities and we are taking it one match at a time,” said Thapa ahead of a training session on Wednesday.

Thapa, who plays for Indian Super League (ISL) side Chennaiyin FC, said playing for the nation is a different feeling altogether and he shared his feelings with the youngsters.

“The setup in the national team is a different feeling altogether. Starting from the pride to the game sense to the tempo and intensity of the training sessions, and eventually the matches -- whatever I have learnt, I share with them [youngsters]. At the end [of the day], we are representing 1.4 billion people and they are never to be let down,” he said.

On whether he has reached his peak, Thapa said: “I never feel so. There is still a long way to go for me and I need to improve on a whole lot of aspects. I need to convert more chances and I need to adapt to the changing playing circumstances that arise during matches.”

Singapore are currently third in the standings, two points and four points behind Uzbekistan and Saudi Arabia respectively.

Midfielder M Anumanthan, who last played for the Lions in June 2019, returns to the fold while defenders Hafiz Sujad and Madhu Mohana have the opportunity to make their first international appearances since March 2018 and October 2018 respectively.

Defensive stalwart Safuwan Baharudin will miss out as a precaution, following a concussion injury that he sustained two-and-a-half weeks ago. Baihakki Khaizan, whose wife is due to give birth next week, will link up with the squad directly in Riyadh; together with team captain Hariss Harun.

“Saifullah, Idraki and Ilhan are all here on merit as they have performed well in the Singapore Premier League this season and also impressed during our training sessions in March,” Yoshida said.

“Saifullah has maintained his consistency from last season, while Idraki is an exciting attacker and gives us options on the flanks. Ilhan may be young, but he is a good talent and can be an option upfront.”

As part of preparations for the Asian Qualifiers, Singapore will play Afghanistan in a closed-door training match on Saturday in Dubai. The team is scheduled to arrive in Riyadh on Monday.

“We have not played international friendlies for over a year, so the match against Afghanistan offers us the opportunity to prepare against an international opponent and give game time to those who require it, as well as test different tactics ahead of the Qualifiers,” Yoshida said.