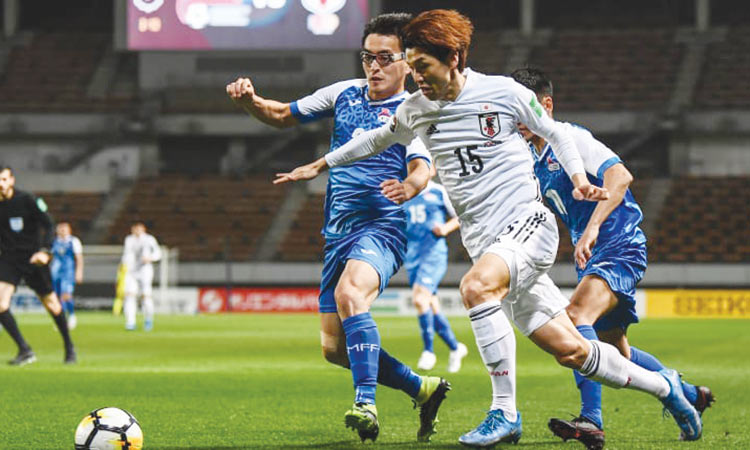 Japan and Mongolia players in action during the second round match of their Asian Qualifiers for the World Cup 2022 and Asian Cup 2023 in Chiba on Tuesday.

Japan handed Mongolia an emphatic 14-0 defeat in the second round of the Asian Qualifiers for the FIFA World Cup Qatar 2022 and AFC Asian Cup China 2023 on Tuesday as Hajime Moriyasu’s side moved closer to securing a berth in the next round.

The win ensures the Japanese maintain their perfect record after five games in Group F and will book their place in the third phase of FIFA World Cup Qatar 2022 qualifying if they defeat Myanmar when the two teams meet in Japan on June 3.

Moriyasu’s side had few issues against a Mongolia side that had relinquished home field advantage due to the ongoing coronavirus pandemic, meaning the game was played at the Fukuda Denshi Arena in Chiba, near Tokyo.

Moriyasu hailed his team’s ruthless streak after the game.

Japan, who are looking to reach their seventh World Cup in a row at Qatar in 2022, scored five first-half goals to take complete control of the game against the hapless Mongolians.

But the Blue Samurai refused to take their foot off the gas, notching another nine after the break to set a new qualifying record and finish just one goal short of their all-time biggest win.

“You could see from the score that the two teams were at a different level, but it wasn’t about our opponents -- it was about how to keep our concentration going into the match,” said Moriyasu, whose team has won all five of its qualifiers so far, scoring 26 goals and conceding none. We prepared well and we kept pushing ourselves and never let up,” he added.

It took 13 minutes for the Japanese to open the scoring when Takumi Minamoto found time and space on the edge of the Mongolian penalty box to slide a fine finish into the far corner of Enkhtaivan Munkh-Erdene’s goal.

Ten minutes later the four-time Asian champions doubled their lead with another high quality passage of play as Minamino stepped over Maya Yoshida’s ball forward, allowing Yuya Osaka to turn the defence with his first touch before slotting home.

Daichi Kamada added the third in the 26th minute when he steadied himself to steer Junya Ito’s cross from the right beyond Munkh-Erdene from just inside the six-yard box and, six minutes later, the Japanese had scored a fourth when Hidemasa Morita netted after Ito’s cutback.

Despite having the game won, the Japanese continued to press and, with five minutes remaining in the half, they claimed a fifth when Khash Erdene Tuyaa directed Ken Matsubara’s cross from the right into his own goal. The goals continued to flow for Japan in the second half, with Osako adding his second soon after substitute Takuma Asano had hit the crossbar with a header. The Germany-based forward had time to turn and slot into the corner following Kamada’s pass.

Substitute Sho Inagaki made it 7-0 in the 68th minute with a clinical finish from just inside the penalty area and Ito scored the goal his all-round performance deserved five minutes later when he slipped the ball in from close range.

Vissel Kobe striker Kyogo Furuhashi scored the ninth with a header off the underside of the bar before Ito hit Japan’s 10th – and his second - just seconds after the restart, while Furuhashi was on target again four minutes from time. Asano stroked in his first as the game entered injury time and Osako completed his hat-trick soon after with a deflected effort from close range before Inagaki scored his second just before the final whistle.

The victory takes Japan on to a perfect 15 points from their first five games and they lead Group F by five points from Tajikistan, having played a game fewer than the Central Asians. Krygyz Republic are in third place a further three points adrift with Myanmar in fourth. Mongolia are in fifth and bottom of the standings.

Hossein Kanaanizadegan opened the scoring for the Iranian team with a header just two minutes into the match. Sardar Azamoun made it 2-0 in the 38th minute.

With nine minutes remaining, substitute Karim Ansarifard scored the third goal for Dragan Skocic’s team with a shot from outside the area.

Iran are scheduled to play Hong Kong and Cambodia on June 3 and 7 in the 2022 World Cup qualification. The matches against Bahrain and Iraq will be held on June 11 and 15.

Due to the coronavirus concerns, the remaining matches will be held at the centralized venue in Bahrain.

The ‘Persian Leopards’ are third in Group C behind Iraq and Bahrain.