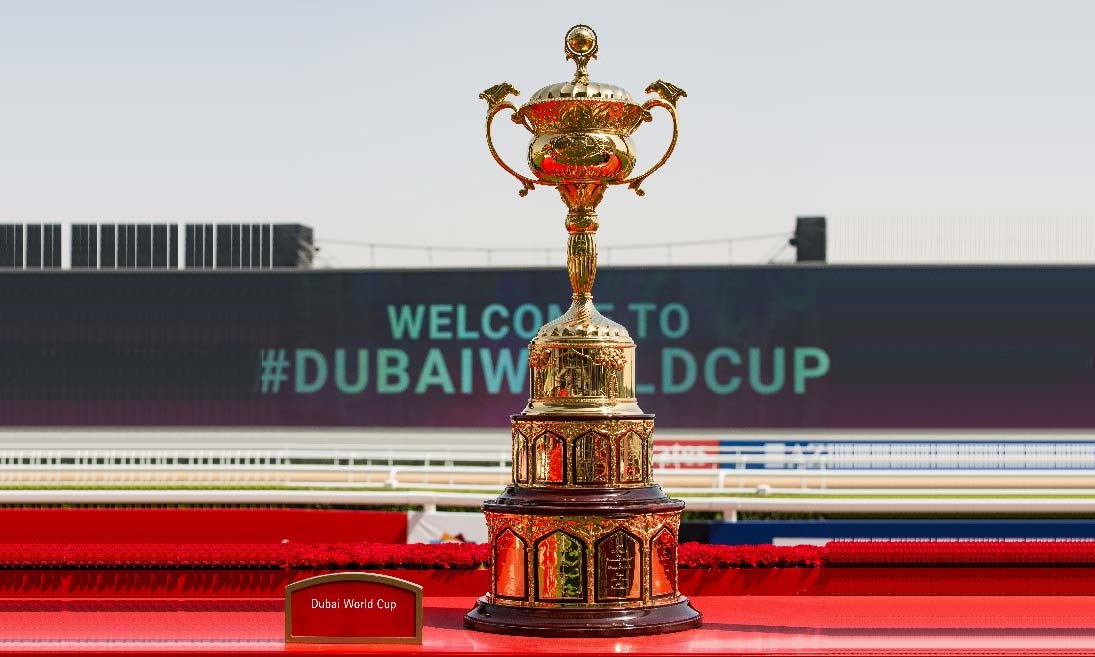 The first Dubai World Cup was held in 1996, with the 25th running set to be celebrated at Meydan Racecourse on Saturday.

A majestic prize handcrafted in sterling silver, richly gilded in gold with ornate chased detailing, the Dubai World Cup trophy was created by Garrard in 1996.

The first Dubai World Cup was held in 1996, with the 25th running set to be celebrated at Meydan Racecourse on Saturday. When the winner of this landmark event is announced, they will hold aloft one of Garrard’s most distinguished and precious perpetual trophies.

Each stage in the creation of the Dubai World Cup required the attention of a dedicated, skilled craftsperson from the Garrard workshop. Framed by elegant handles that morph into two golden horse heads, the cup is topped with a golden globe symbolic of the winner’s status as one of the best in the world of horseracing and sits upon a tiered base engraved with the names of previous esteemed champions.

The trophy was the result of a close collaboration between the designers at Garrard and its team of highly skilled master silversmiths. “Every cup crafted by Garrard is cohesively aligned with our rich heritage for crafting some of the most famous trophies in the world. The design of the Dubai World Cup reflects the huge amounts of determination and skill required of all those who enter, and the glory of winning the world's most spectacular race day.”

Crafting a cup of this cachet requires exceptional skill and artisanal savoir-faire, beginning with an elegant gouache painting by Garrard’s Creative Director, Sara Prentice. Before the craftsmanship can begin, the measurements are meticulously calculated, checked and adjusted to ensure the size and proportions of the trophy are absolutely perfect.

In the workshop, the silver is annealed – an intense heat-treating process designed to strengthen the precious metal – before being spun to form the grand silhouette of the trophy. Next, the vase is hand-chased with an intricate pattern, while individual components are first filed, then soldered in place. The trophy is then engraved by hand, hallmarked and polished until it gleams.

This journey requires months of attention from Garrard’s master silversmiths, who employ time-honoured techniques that remain unchanged since the founding of the House in 1735, partnered with the latest cutting-edge technology to achieve even greater levels of impeccable craftsmanship.

The Dubai World Cup trophy represents just one of the treasures in Garrard’s long legacy of crafting prestigious silverware and important accolades. The House has been called upon to create some of the world’s most renowned sporting trophies, among them the America’s Cup, the Royal Ascot Gold Cup and the ICC Cricket World Cup.

Capturing the honour of taking part and the glory of winning in equal measure, each design follows in the tradition established by Garrard’s founder silversmith George Wickes, achieving a balance of timeless design and flawless craftsmanship that both inspires and rewards greatness.