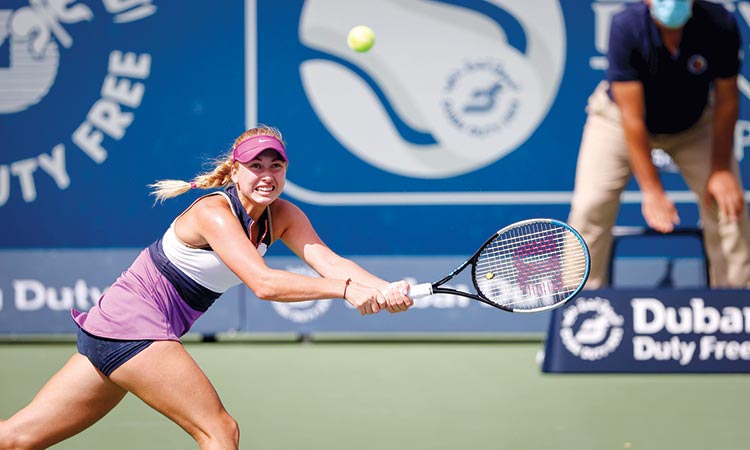 Barbora Krejcikova returns to Anastasia Potapova during their quarter-final match of the Dubai Duty Free Tennis Championships on Thursday. Supplied

Muguruza defeated Sabalenka for the second time in two weeks, as the former World No.1 beat the Belarusian en route to the Qatar Total Open final last week. Muguruza needed one hour and 44 minutes to repeat the feat and reach the semifinals in Dubai for the third time in her career (also in 2015 and 2018).

Muguruza, still seeking her first trip to the Dubai final, picked up her WTA-leading 16th match-win of the season by firing 23 winners, outpacing her 20 unforced errors, and converting five of her 11 break points.

Sabalenka had 26 winners but saw her unforced error count creep upwards as the match progressed, and she finished with 34 miscues.

Sabalenka saved two break points in the first game of the match, then would not face any more for the remainder of the first set. Sabalenka grabbed the only break of the opening frame at 3-1, then smoothly powered her way to the one-set lead, clinching it with a winning overhead.

Muguruza fell behind a break in the opening game of the second set, but wrested the momentum from there, blasting incredible returns with ease to take Sabalenka’s next two service games and move ahead 3-1. Muguruza had no trouble on her service games for the rest of the set, leveling the clash at one set apiece with a love hold.

Muguruza refused to yield in the decider, and, after an early exchange of breaks, her strong serves and forehands either garnered her outright winners or drew errors from the Sabalenka racquet with regularity. A double-break lead for 5-2 put Muguruza firmly in control, and she closed out the match with another service hold at love to defeat Sabalenka once more.

‘I KEPT ON FIGHTING’: Earlier, after over two hours of gruelling tennis, Mertens stared down a 5-7, 2-5 deficit against Pegula . Eleven games later, Mertens walked off court the winner, having saved three match points serving at 4-5 in the second set.

“I just didn’t want to let it go,” Mertens declared afterwards. “I kept on fighting and that was the spirit today.”

The Belgian not only demonstrated indomitable will but also one of the finest tactical brains on the Tour and some hefty endurance levels. The two-hour, 47-minute contest was the longest of the tournament so far, and comprised numerous absorbing momentum shifts as Mertens and Pegula forced each other to keep adjusting.

Varying pace and spin, Mertens had the better of an edgy opening, grinding into a 4-2 lead as Pegula was kept off-balance. The American’s solution was to come forward: committing to a serve-and-volley approach saw Pegula survive a nine-minute hold and ultimately snatch the first set. Impressively, she stuck to the strategy even when Mertens had seemingly gotten wise to it with a pair of brilliant backhand passes.

The first set alone had taken 75 minutes, and unsurprisingly Pegula surged after capturing it. Mertens, beset by an uncharacteristic amount of errors and 13 double faults, barely clung on as Pegula advanced to the brink of victory.

But with her back to the wall, the Gippsland Trophy champion became watertight. Sensing tension creep into the Pegula forehand, Mertens directed all traffic to that wing on each match point she faced, and was rewarded with an error over the baseline three times. Having levelled at 5-5, a rejuvenated Mertens worked a fading Pegula relentlessly around the court, exploiting the World No.36’s increasing signs of fatigue as she raced through the last 11 straight games.

Throughout, World No.63 Krejcikova was cool-headed and in control. The 25-year-old’s backhand was particularly impressive: she was able to find winning angles as well as redirect it down the line with ease.

By contrast, Potapova began shakily and never settled. The teenager had been forced to retire from her doubles second round the previous night after being hit in the eye with a ball, and two double faults in her first service game unfortunately set the tone. There would be seven from the Russian in total, including another three to drop serve for the first time in the second set.

There were also 28 unforced errors, frequently on standard rally balls, prompting the 19-year-old to berate herself in anguish: “The court is there!” 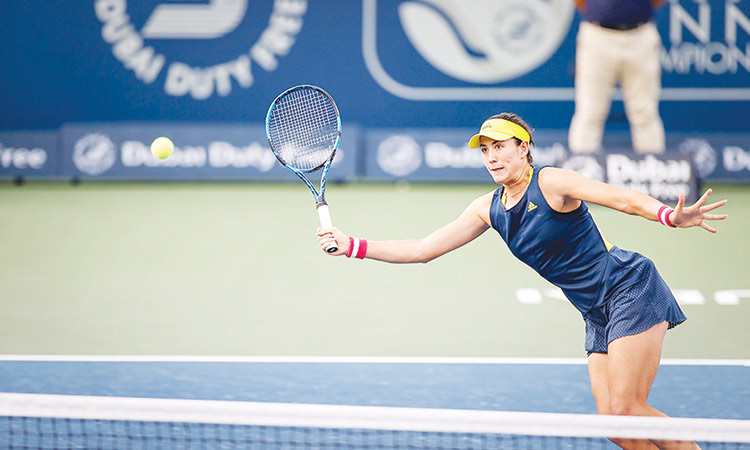