Delighted Pegula not taking anything for granted in Dubai - GulfToday

Delighted Pegula not taking anything for granted in Dubai 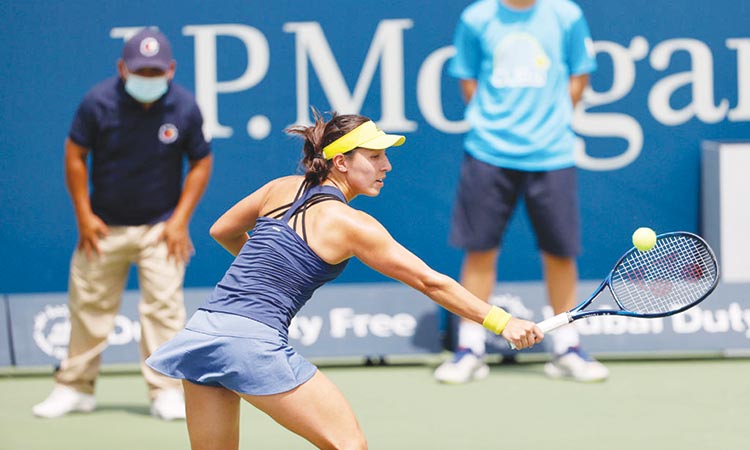 The American, daughter of the owners of the NFL’s Buffalo Bills and NHL’s Buffalo Sabres Terry and Kim, took just 53 minutes to send the Czech packing in the third round match at the Centre Court on Wednesday.

It was their second meeting in two weeks, with Pegula also coming out on top in the Qatar Open with an equally emphatic 6-3, 6-1 victory over the world No.6.

Capitalising on Pliskova’s errors, Pengula wrapped up the first set in just 20 minutes. The world No.6 tried to make a comeback in the second. She broke the American’s serve in the first game but Pegula responded immediately and later secured her spot in the last eight when Pliskova double-faulted again.

“I have surprised myself a little bit with how well I have done,” Pegula said in her post match press conference.

“I think I didn’t give away a lot of free points. I was serving well and I didn’t make a lot of errors. That’s what I wanted to do and I think I just stuck with my game plan pretty well and was able to execute it.

“I definitely think I have surprised myself a little bit with how well I’ve done because it’s hard to follow up a breakthrough. I am happy I have been able to do it. She was not amazing and I knew I could stay in on the return games.

“It’s a weird feeling to beat her twice. I had more nerves here as she was kind of expected to win again,” she added.

With a win over the 2015 runner-up, Pegula is through to the quarter-finals at a WTA 1000-level tournament for the second time in her career.

Pegula, known more for her family than anything else, hogged the limelight after reaching the Australian Open quarter-finals last month.

Her fairytale run at the Australian Open was ended by her good friend Brady.

Her previous best run at a major was a third-round appearance in the 2020 US Open.

“This is definitely the best of any other year I have had,” said Pegula. The American had made her way to Doha quarters after coming through gruelling qualifiers.

“Once I got through qualification in Doha I started to relax a little bit more. It was tough mentally to do that after playing at Melbourne Park in the quarter-finals of the first Grand Slam of the season and now I’m on a side court and playing three rounds just to get into the tournament.

“It was a weird feeling, but I think I’ve settled in a little bit now and happy that I have been able to back up those results.

“I am just really happy I’m able to do it, especially in a time where, with the pandemic it’s been really hard to know what’s going to happen in the future, so I think also in a way maybe it helped me mentally not to take each match for granted.

“I am definitely going out there competing as hard as I can just with all that’s going on in the world.”