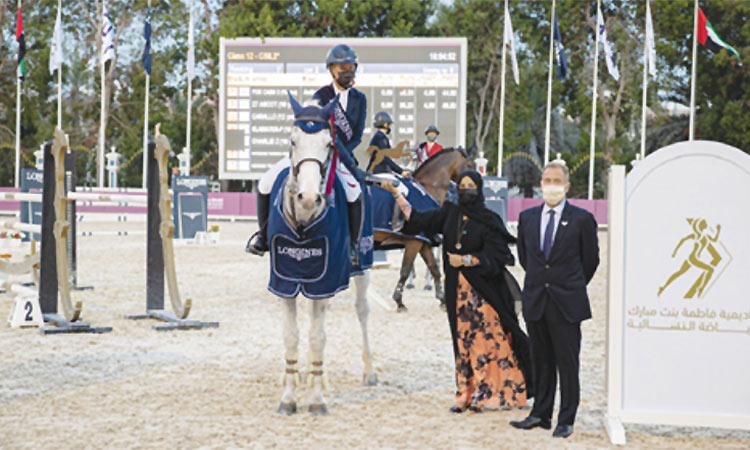 Anita Annika Sande from Denmark after winning gold in the (CSIL2*) Dhs125,000 Grand Prix by Longines.

The atmosphere at the Abu Dhabi Equestrian Club was electric on the third and final day of FBMA International Show Jumping Cup as 108 riders showcased their skills in 6 categories including the day’s grand finale, the Longines Grand Prix.

The (CSIL2*) Dhs125,000 Grand Prix by Longines challenged 11 riders over a fence standing 145m tall and provided a thrilling end to the weekend’s spectacular equestrian competition.

Only 2 athletes qualified for the jump-off. Anita Annika Sande from Denmark clinched gold, riding For Cash 2 and winning in a time of 44.92 seconds. Georgia Tame finished second in 46.53 seconds astride Z7 Ascot, while Tina Lund ended third on Carallo.

Sande said: “I have competed in all 8 editions of the FBMA International Show Jumping Cup and this is the third time I’m getting first place. It’s a special show to my heart, and even more special that it was organised in these special circumstances. A big thank you for the organising committee to have put in the extra effort to make it happen.”

The UAE’s young riders dominated the CSIJ-A category. Six riders qualified for the jump-off with UAE’s Abdullah Hamad Ali Alkirbi won with a time of 35.16 seconds, ahead of Mohamed Hamad Ali Al Kirbi in second and Omar Abdul Aziz Al Marzooqi in third.

The CSIYH1* category saw 7 riders qualify for the jump-off. Syria’s Chadi Gharib on Elite De Ponts won with a time of 31.37 seconds. Denmark’s Lina Lund came in second on Even Flow HBR and Jack Ryan from Ireland took third.

The excitement continued when when riders qualified for jump-off at CSIU25-A. This category saw the UAE team of Moufi Owaida Al Karbi on Calvaro’s Star claim first place with a time of 30.08 seconds. Sara Hussein Saleh Al Armouti from Jordan on Godiva’s Boy P took second place, with third spot being taken by Jack Ryan from Ireland on BBS McGregor.

The category with the most competing riders was CSIL2* in which 10 out of 29 riders went to the jump-off. Aya Hamcho from Syria took first place astride Champion 126 with 32.62 seconds. Georgia Tame from GBR came in second ahead of Tina Lund in third place.

Dr Naema AlMansoori, FBMA Board Member said: “The success of the eighth edition is a message to the world that reflects the UAE’s leadership’s strong purpose in constantly progressing and aiming for excellence in all fields, especially sports. The Academy was able to organise the event at highest level despite the challenges surrounding us.” 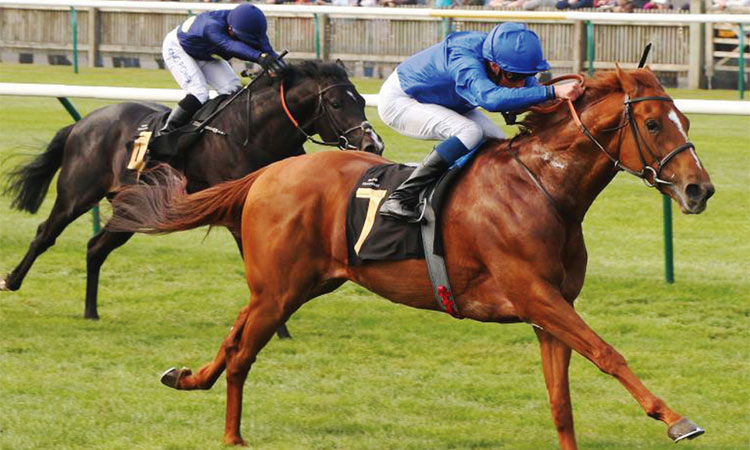 Jalmoud looks to provide Charlie Appleby with a second successive victory in the G2 Great Voltigeur Stakes at York in UK on Wednesday. The trainer recorded a notable one-two in the 12-furlong contest for three-year-olds in 2018,