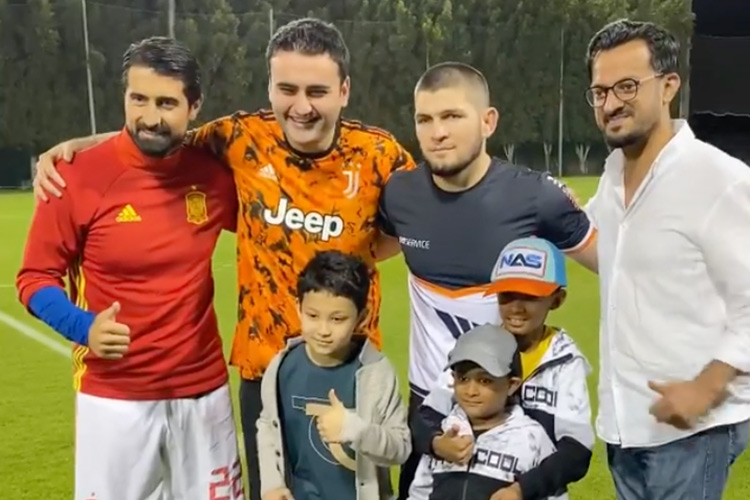 Khabib and Burak pose for a photograph with others.

World-famous Turkish chef Burak Özdemir, popularly known as “CZNburak,” published on his Instagram account a video of a football match that brings him together with the Russian MMA star Khabib Nurmuhamedov.

The due shared photos and a video of the match at NAS Sports Complex in Dubai.

Khabib said on his Instagram account, “It was our squad, there was nothing unusual, we just were a more disciplined team, held the ball and played pass, and the opponents lacked cohesion and a little experience.

We have not yet had the main player, whom our rivals turned off in Makhachkala @zainukov_makkasharip… So we dedicate this victory to him ✊” 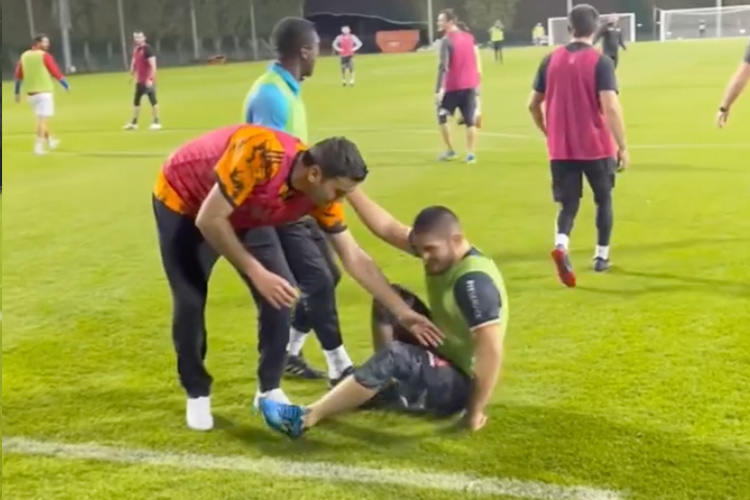 Burak lends a hand Khabib after he falls down.

It was a friendly warm up match. Burak was seen dribbling and doing a back-heel pass to his teammates.

Later he was seen goalkeeping.

He managed to save a sure shot goal with an incredible save. 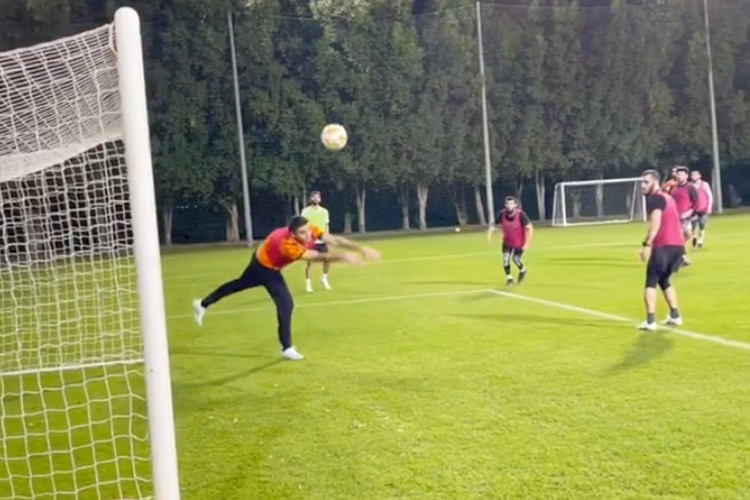 Burak makes an incredible save.

Khabib said on his Instagram, “This guy was my Father favorite football player.
Nice to meet you my Friend @clarenceseedorf…” 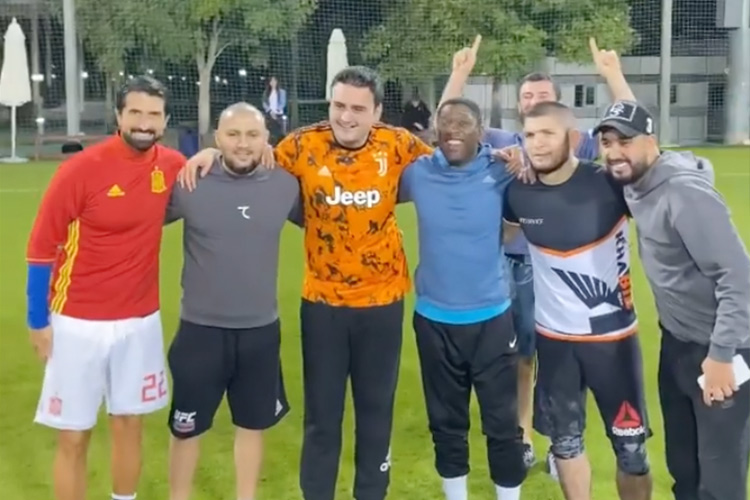 Burak, Khabib and teammates pose for a photograph.

A day earlier, Khabib dined at Burak restaurant. He said, “Thank you so much brother @cznburak. It was amazing dinner 🤝👌”
On Monday morning, Khabib went for a trekking trip.

Khabib said, “An hour and a half climb in the Hatta Mountains of the Emirates.”
In October, walking away at the peak of his career, undefeated UFC star Khabib, 32, announced his retirement after defeating Justin Gaethje at UAE’s Fight Island. 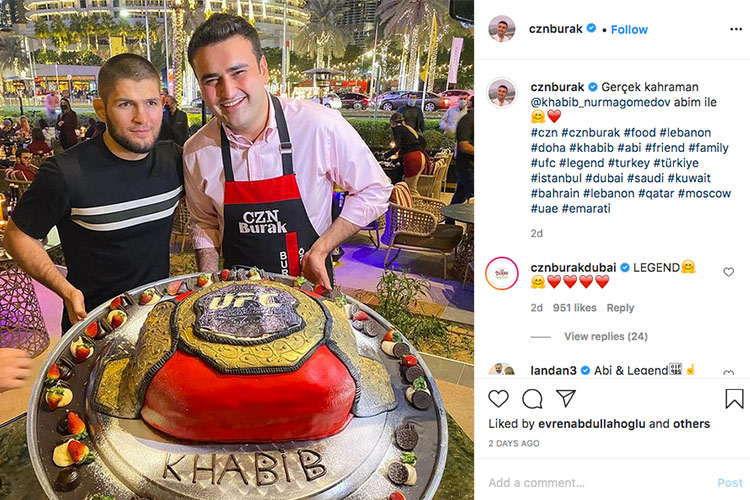 Moments after moving to 29-0 in his career and cementing his legacy, Khabib took off his gloves and laid them down in the middle of the octagon as he announced his retirement from the sport. 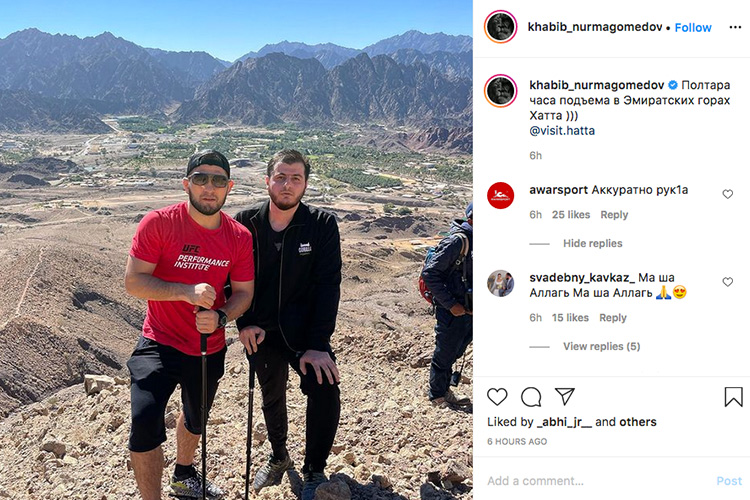 “Today I want to say this was my last fight,” Nurmagomedov announced. “No way I’m going to come here without my father. It was the first time after what happened with my father, when UFC called me about Justin, I talked with my mother for three days. She doesn’t want me to go fight without my father but I promised her it was going to be my last fight,” he was quoted as saying by MMA.

“If I give my word, I have to follow this. It was my last fight here,” the champion said. 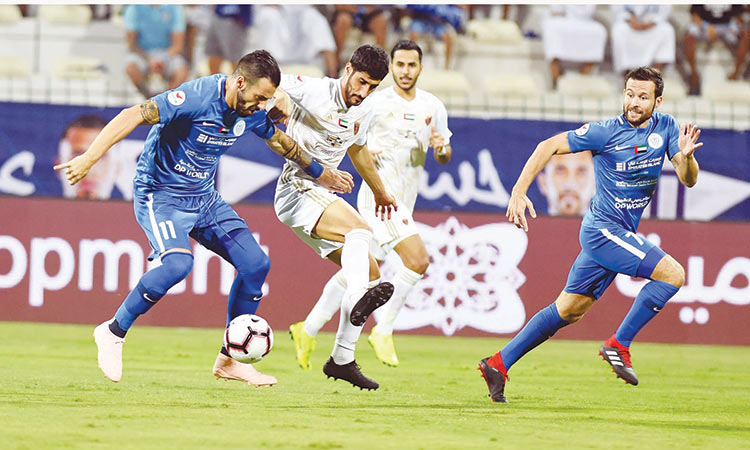