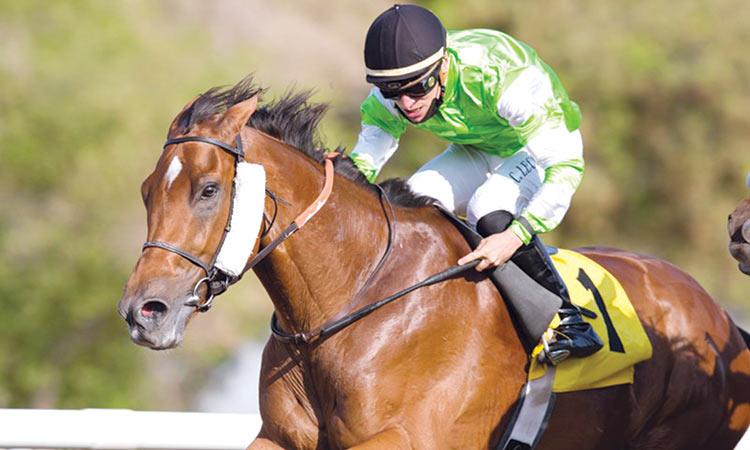 Racing at Jebel Ali on Friday afternoon was officially highlighted by a 1950m conditions race which proved a memorable occasion for Frenchman Clement Lecoeuvre who partnered his first UAE winner, Blue Sovereign, in his new role as stable jockey to the successful trainer, compatriot Erwan Charpy.

With only seven runners, Lady Snazz set a moderate early gallop under Richard Mullen before Lecoeuvre, in the predominantly green silks of Al Bait Mutawahed Team, soon decided that would not suit his horse and he took over at the head of affairs.

That probably proved decisive with the 5-year-old Teofilo gelding staying on grimly to deny a renewed challenge from Lady Snazz to double his career tally after a 2600m victory at Al Ain in February.

Charpy said: “This is horse is just a tough, dour, stayer and Clement was very clever there because there was no real pace early on, so he was positive. That was a very good ride.

The fixture commenced with the second of five races throughout the season for Purebred Arabians foaled in the UAE, on this occasion a 1400m handicap, won stylishly by AF Almomayaz. Never far off the pace under French apprentice Hugo Lebouc, sporting the green and yellow silks of Nasir Askar the 5-year-old entire hit the front 200m out and was soon clear to post a comfortable success for Ali Rashid Al Rayhi.

The horse, conceding weight to all his 12 rivals, was making it two wins from just six starts having previously landed a 1600m maiden on the Al Ain dirt on his third start and seasonal debut this season in October.

Arguably the best race on the card was a 1400m handicap and Askar, often described as ‘the luckiest owner in the UAE’, was celebrating again, this time combining with Satish Seemar and Tadhg O’Shea to land the spoils with Karaginsky.

In a virtual carbon copy of Lebouc’s ride in the opener, O’Shea tracked the early speed before driving his mount to the front 400m out at which point 14 of his rivals were beaten.

The exception was stable companion Cachao, ridden by Seemar’s apprentice Nathan Crosse who threw down a determined challenge throughout the final 300m, but could not get his head in front. A 5-year-old Dubawi gelding, Karaginsky was doubling his career tally having won a 1600m course maiden on just his second local outing in February 2019. He was able to take advantage of receiving weight from all bar two of his rivals.

Tenacious was the word that sprung immediately to mind after the battling success of Bladesmith in a 600m maiden, completing doubles for Seemar and O’Shea. A 4-year-old Mastercraftsman gelding, he was losing his maiden tag at the sixth attempt and supplying Libyan owner Hakim Abdalla a second UAE victory. Soon in front under the Champion Jockey, he was probably headed at the 200m pole when both Rougher and Insaan appeared more likely winners, but he responded gamely to his jockey’s urgings, was soon back in front and clung on grimly.

A 1200m maiden may not have been an obvious highlight, but it provided a spectacle for the few present and those watching at home on television. Major Cinnamon, Al Hadeer and Vasari all led in the final 300m, but they could not thwart the final challenge of Sadeedd. Representing the ‘home team’, being trained at the adjacent stables by Nicholas Bachalard for racecourse patron Sheikh Ahmed bin Rashid Al Maktoum, the 3-year-old Stay Thirsty rig was delivered to lead in the final 50m by Ryan Curatolo. Runner-up on his seasonal return in a 1000m maiden, he was opening his account at the sixth attempt and Bachalard said: “He ran well last time and has opened his account now. I expected him to be closer to the pace, but they went quick and he will probably stay further, so we have options with him.”

Fourteen went to post in the 1800m handicap, but only one ever really mattered with Tailor’s Row, despite being drawn 13, soon able to get to the lead under Royston Ffrench and staying there, putting the race to bed fully 400m out when skipping clear.