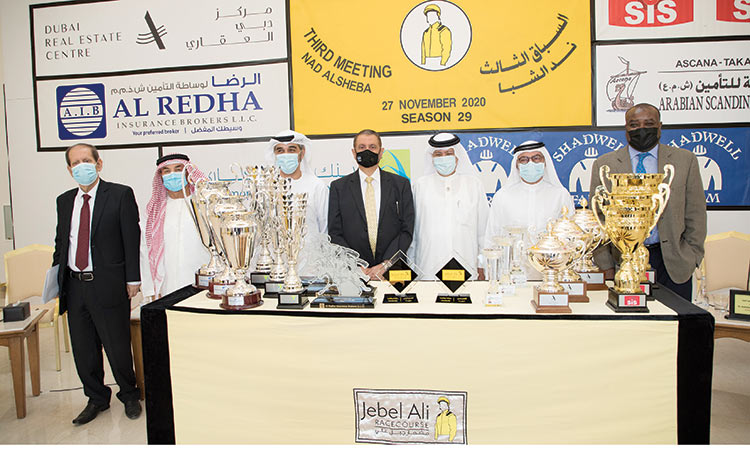 Mirza Al Sayegh, Shareef Al Halawani and other dignitaries during the press conference at the Jebel Ali Racecourse on Tuesday. Supplied picture

The Jebel Ali Racecourse will host their third meeting of the season on Friday, with a Shadwell Farm sponsored 1000m Conditions race for Thoroughbreds the pick of the six-race card.

The Conditions event at Abu Dhabi regarded as a major prep for the Listed National Day Cup on the first Friday in December.

The duo will be looking to keep the momentum going on Friday. Bachalard dispatches a total of three runners during the course of the afternoon with Top Clearance participating in the 1400m handicap and 2yo Tamarkuz colt Tahdeed making his first career start in the 1000m maiden that will be contested as the penultimate race.

Pinning high hopes on Raakezz, Bachalard singled out Ghadayer’s charge What A Metal as the one to beat.

“We run three horses this week and Raakezz takes part in the feature which is over a distance he likes. He has a good draw too and if he can break well he should have a chance,” said the French conditioner.

“But What A Metal has won over the course already this year and that’s why he’ll probably have a small edge on us fitness wise. But as long as Raakezz runs well we’ll be happy.

“With regards to the 2yo Tahdeed, we hope he can break well and we hope he can have a good year because our ultimate goal this season is to try and be present on Dubai World Cup night and find runners that can take us there through the Guineas and then on to the Derby.”

Of Top Clearance, Bachalard added: “We are trying something different with him and I hope he will come back and have a better chance another day because he hasn’t run this distance in over five years.”

Rashed Bouresly’s yard is represented by Morrabbi Al Ajjial and You’re My Rock, while Jaber Ramadhan has Raahy and Mohammed Rahman puts his bet on Major Cinnamon.

Speaking during a press conference held at the Jebel Ali Racecourse on Tuesday, Mirza Al Sayegh, Director of the Office of Sheikh Hamdan Bin Rashid Al Maktoum, Deputy Ruler of Dubai and UAE’s Minister of Finance, said: “Sheikh Hamdan is very passionate of racing in the country. He feels proud to sponsor events at Jebel Ali Racecourse and has been a long term supporter of racing activity here.

“His passion combines his interests both as a patron of Jebel Ali through his sponsorship of the races under the Shadwell banner and the participation of his horses.

“Jebel Ali Racecourse has always been a venue that’s very close to his heart and he has had some memorable victories here over the years. Apart from that, this has been a very memorable year for Sheikh Hamdan in Europe with so many major victories and the Owners’ Championship in Britain.

Shareef Al Halawani, Jebel Ali Racecourse Manager, said: “It is a competitive card with six races and a fair amount of prize money on offer.

“Jebel Ali has always been a popular racecourse for trainers and jockeys, but unfortunately due to the Covid-19 situation racing is being held without fans. Jebel Ali will miss the atmosphere that has turned racing here into a very family affair.”