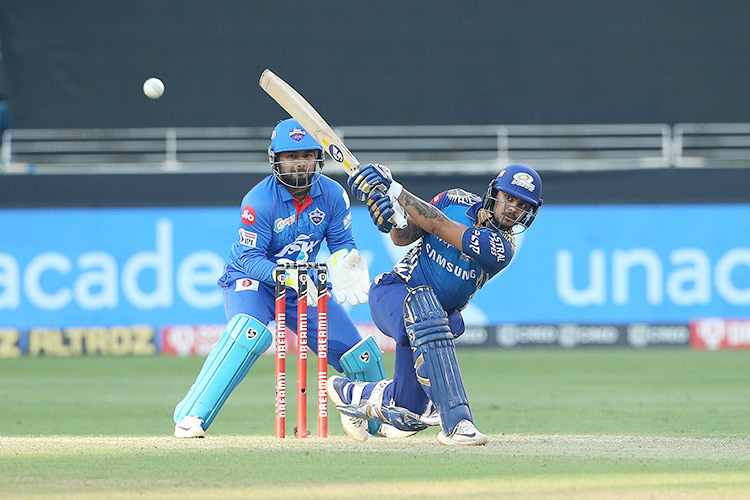 Mumbai Indians' Ishan Kishan in action against Delhi Capitals during their IPL match in Dubai.

While Jasprit Bumrah and Trent Boult wreaked havoc with the ball, Ishan Kishan (72) struck an unbeaten fifty as Mumbai Indians (MI) strolled to a nine-wicket win over Delhi Capitals (DC) in their Indian Premier League (IPL) match on Saturday.

After restricting Delhi to a paltry 110 for nine wickets, Mumbai knocked down the winning run with almost six overs to spare. With two points from the win, Mumbai's tally has gone up to 18, which ensured they are going to finish at the top.

Delhi have lost their fourth match on a trot after a stellar first-half that saw them leading the pack for most of the time. Their four-match skid has left their qualification in dire straits and the one game they have left against Sunrisers Hyderabad (SRH) would be their last chance to make amends.

Meanwhile, Kishan and Quinton De Kock shared a 68-run stand for the first wicket to set the tone for a successful chase.

Both the batsmen made light work of Delhi’s bowling attack, reducing them to mere cannon fodder. So hapless were the Delhi bowlers that they even failed to mount any kind pressure and choke runs.

The pair completed a fifty-run partnership in the ninth over before Mumbai moved to 68/0 at the halfway stage of the chase. But Delhi did manage to break the opening stand after Anrich Nortje got de Kock out for 26 in the 11th over.

After De Kock's dismissal, Kishan added another unbeaten 43 runs with Suryakumar Yadav, who played a match-winning knock in the last game. Kishan then brought up his third half-century of the season. While Yadav scored an unbeaten 12, Kishan added 22 runs following his fifty to power his side to a win, with 5.4 overs to spare. Kishan’s innings was studded with three sixes and eight boundaries.

Earlier, Boult and Bumrah took three wickets each and ripped through Delhi’s batting line-up. Delhi’s opening partnership problems continued as this time around Shikhar Dhawan, who scored two consecutive centuries earlier, was out for a duck. He was caught by Yadav off Boult's bowling.

Prithvi Shaw also fell to the New Zealand pacer in the third over after which captain Shreyas Iyer and Rishabh Pant knuckled down to steady the ship.

Mumbai kept things extremely tight and limited Delhi to 22/2 at the end of the powerplay before Iyer and Pant added 35 runs together. Delhi then lost three wickets in quick succession. They were reduced from 39-2 to 62-5 in the space of 13 runs. First, Iyer got out in the 11th over as de Kock completed a sharp stumping off Rahul Chahar’s bowling. An over later, Bumrah bowled a two-wicket over, dismissing Marcus Stoinis and Pant.

The Indian speedster picked up his third wicket of the match as he trapped Harshal Patel leg before as Delhi were left reeling at 73/6 after 14 overs. Kagiso Rabada led some semblance of a fightback from the lower middle order, which finally took them past the 100-run mark.

Mumbai continued to chip away as Coulter-Nile got his first wicket of the match after he dismissed Shimron Hetmyer. Mumbai eventually limited Delhi to 110/9 in their allotted 20 overs.