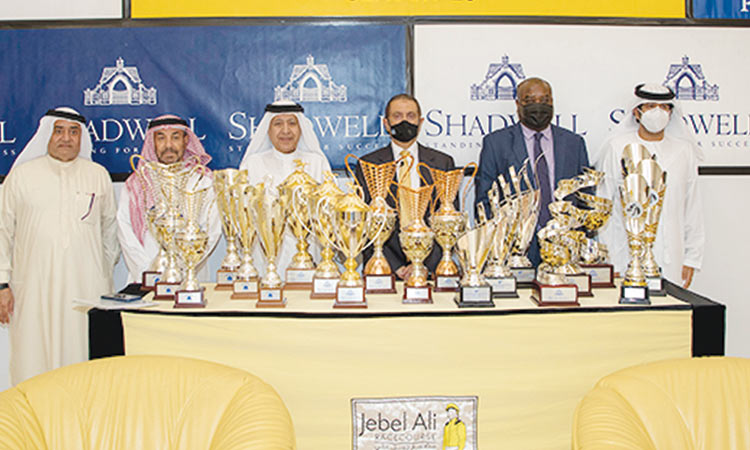 Braving the blistering heat and brushing aside the coronavirus pandemic threat, Shareef Al Halawani, Jebel Ali Racecourse Manager, and his team have ensured that when the Jebel Ali Racecourse kicks off their season on Friday, the track will be in perfect shape and ready for thrilling action over the next six months.

The Halawani-led team have been busy for the past four months working meticulously on the racecourse to further enhance its restoration that was carried out last winter.

During the last season, racing had been temporarily suspended after an inspection by a team comprising officials from the Emirates Racing Authority (ERA), and jockeys, following a complaint by a group of jockeys, who approached ERA stewards on a matter concerning track safety. The riders then had found the track unsafe due to the kickback phenomenon throughout the entire surface of the track.

Three meetings were cancelled before the Jebel Ali management decided to rebuild the track and satisfy the ERA members, jockeys and other stakeholders. Later, they successfully hosted the prestigious Jebel Ali Sprint and Jebel Ali Stakes.

Ahead of the new season, Halawani and his team left no stone unturned in their bid to deliver a track meeting international standards. With advise from specialists, a special scientific blend was developed as a mix for the surface.

The Jebel Ali track was tested on Monday morning by ERA officials and the green signal was obtained, a testimony to the intense work done during the off season. The Jebel Ali management also conducted trials to make sure the jockeys have smooth ride when the action begins.

As part of the measures to improve the standard of racing at the venue, the racetrack underwent further upgrading with the help of international experts and Halawani declared the track is 100 per cent safe for racing.

“We are extremely satisfied with the status of the new racing surface which provides the right balance and guarantees safety of the riders,” he said.

“The scientific formula designed by us and tested by specialist laboratories helped in improving the surface.

“Solutions were found. The experts were able to develop a blend that was a balanced and natural mix of elements and all of the necessary work that needed to be done was completed well in time to make the surface ideal. The surface is stable and cohesive and found to be safe for both horses and riders,” he added.

The launch of the Jebel Ali’s new season was announced during a press conference held at the racecourse on Tuesday.

Following the COVID-19 restrictions and safety measures laid down by the UAE health authorities, it was decided that the new season would be without fans.

“We are committed to the precautionary measures at the highest level to ensure the safety of jockeys, trainers, officials and horses at each meeting,” he added.

“Racing at Jebel Ali has always been about the atmosphere as fans are the spirit of racecourse but in these difficult times it will not be easy.

“There will be no fans in attendance and we will strictly follow the health and safety protocols that have been put in place by the government,” Halawni said.

A seven-race card will open the season. Highlight of the card is a feature sponsored by Sheikh Hamdan Bin Rashid Al Maktoum, Deputy Ruler of Dubai and UAE’s Minister of Finance and Industry.

Six go to the post in the 1,400m run with Ali Rashid Al Rayhi’s Moqtaareb, the highest rated at 97 carrying the colours of Sheikh Hamdan.

It is the 4yo Kingman gelding’s first run since finishing seventh behind Godolphin’s Barney Roy in the Group 1 Jebel Hatta during last season’s Dubai World Cup Carnival.

Mirza Al Sayegh, the Director General of the Office of Sheikh Hamdan praised the role of the Jebel Ali Racecourse staff in getting a new surface ready in time for racing.

“Sheikh Hamdan has over the years been an ardent supporter of racing at this venue. “He has has assured Jebel Ali that he will continue to support all the feature races throughout the season at Jebel Ali,” said Sayegh.

“We are all very excited to see racing return to Jebel Ali, even if in a different form without spectators. It is not ideal, but under the circumstances it is necessary,” Sayegh added.