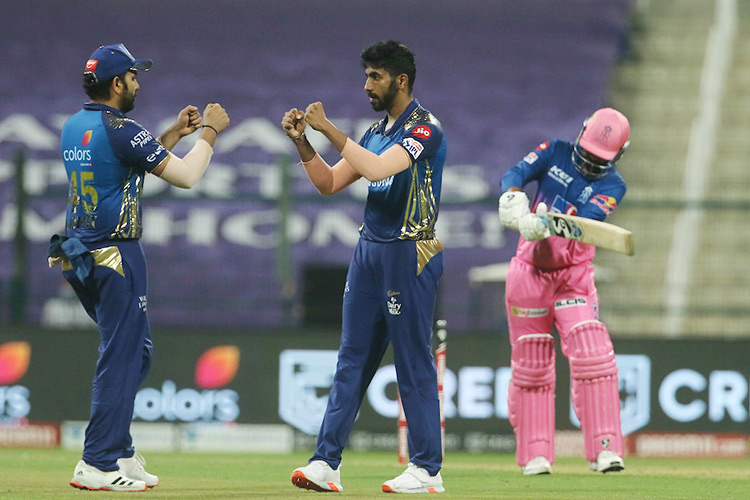 Mumbai skittled out Rajasthan for 136 in 18.1 overs as Bumrah and Boult took four and two wickets, conceding 20 and 26 runs respectively.

Defending champions Mumbai went on the top of the standings with a third victory on the trot. They have procured eight points from six games, winning four and losing two.

Rajasthan were never in contention in their chase. Trent Boult sent back opener Yashasvi Jaiswal for naught to give Mumbai their first breakthrough.

In the next over, Bumrah got rid of captain Steve Smith by getting him caught by wicket-keeper Quinton De Kock to push Rajasthan on the backfoot with just seven runs on the board.

In his second over, Boult got rid of danger man Sanju Samson, who has already scored two fifties in this season, to make it 12/3.

Jos Buttler waged the lone battle single-handedly with a fighting 70 off 44 balls with the help of four boundaries and five sixes. But he did not get support from any other batsman as Rajasthan kept on losing the wickets at regular intervals.

Bumrah returned for his second spell to rip through the middle order. He rattled the stumps of Raul Tewatia, had Jofra Archer and Shreyas Gopal caught by Kieron Pollard and De Kock respectively to complete his four-wicket haul. James Pattinson also took two wickets for 19 runs.

Earlier, Yadav dominated the Rajasthan bowlers with a fine display of batting. All the batsmen of Mumbai are peaking in turns and they click when the team needs them the most. With everyone chipping in with a useful contribution in different matches, it takes the pressure off the frontline batsmen.

This time around, it was the turn of Yadav, who was due for a big innings and he delivered at the perfect time. Yadav belted an unbeaten 47-ball 79 and shared an unbroken 76-run stand for the fifth wicket with Hardik Pandya. Not only did he anchor the innings but also took the score to a fighting total, setting Rajasthan a huge target of 194. Yadav came out in the middle when Mumbai had lost two wickets off consecutive deliveries. Shreyas Gopal got rid of Rohit Sharma (33) and Ishan Kishan (0) off successive deliveries to push Mumbai on the backfoot.

Gopal had Rohit caught by Tewati before Kishan, who smashed a quick-fire 99 against Bangalore and took the match into the Super Over along with Pollard, failed to open his account and holed out to Samson. The double jolt off the successive deliveries left Mumbai in tatters. They needed someone to play a sheet-anchor role.

Yadav and Hardik knuckled down to rebuild the innings and played cautiously for a few overs before flexing their muscles. Yadav raced to his fifty with a boundary off Sam Curran. He smashed 11 boundaries and two sixes over the fence during his stint at the crease while Hardik hit two fours and one six as the duo took the score to 193 in their allotted overs.