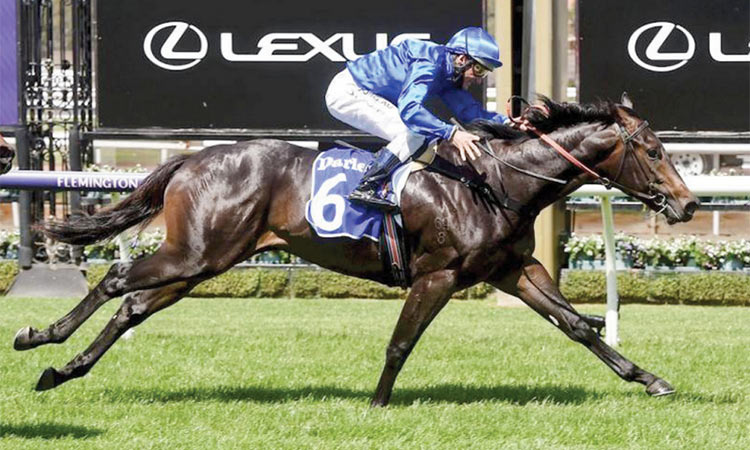 Godolphin’s Ingratiating in action during the Darley Maribyrnong Trial Stakes.

Ingratiating launched the season for Godolphin’s newest generation of Australian two-year-olds at Flemington on Saturday, at the same time giving the stud career of Darley shuttler Frosted a massive push.

On a day when the classy filly Thermosphere revealed G1 VRC Oaks credentials when winning the G2 Edward Manifold Stakes, Ingratiating got his career underway with a dominant victory in the Listed Darley Maribyrnong Trial.

After jumping cleanly from his inside gate, Ingratiating had control of the race from the halfway point, racing to the lead at the 150m and scoring by a length from General Beau with another son of Frosted, Cloudy, in third place.

For Frosted the winner was his first at Stakes level and left him with a win and three placings from his first three Australian runners. He has had six winners from his first American crop.

“We always had a good feel for him,” said Sean Keogh, representing head trainer James Cummings.

“The guys at Crown Lodge in Sydney took him through his paces and then he came to Melbourne about six weeks ago.

“It’s a good result. When he was produced he just showed a good turn-of-foot.  It looks like he has good natural speed but he has toughness to fight it out and the class too. He’s got plenty of scope to come and we’re delighted with that.”

The win endorsed the judgement of champion jockey Damien Oliver who had ridden the colt in his trials.

“He’s a little ripper,” Oliver declared. “He pleased me in his trials where he didn’t quite get it all together, but I knew he had something there. He jumped well today which he hadn’t done in his trials and he was a very professional horse.”

Thermosphere had already proved herself an above average filly when winning the G3 Magic Night Stakes in her juvenile season last autumn and today showed she possessed more than the explosive power of her sire Exosphere.

Having the fourth run of her current preparation, Thermosphere went into the race with an edge in class over her rivals and came out of it with a Classic start on offer. Thermosphere was never closer than three off the fence but when called on at the 200m she surged to the front and held on bravely to beat Starelle by a long neck with Chica Fuerte in third place.

“(She) was in a bit of an awkward spot she ended up three-wide with cover and in a lovely rhythm,” Keogh said.

“She came into this well-conditioned from her races in Sydney and the riders up there told us she’d be good at a mile and James (Cummings) was confident she would get it.

Winning rider Damian Lane said the filly’s toughness had got her over the line.

“She had some quality formlines through good fillies in Sydney and obviously well-placed by the team to avoid them and bring her down here,” Lane said.

“I knew the gate wouldn’t work in our favour, but lucky she was tough and she was strong when it counted.”

“She dug in deep and finished strong so you can’t knock her stamina at this stage.”

As well as the stable double, the veteran import Best Of Days showed he could still be a spring contender when third in the Listed Paris Lane Stakes while Deprive ran an encouraging first-up third to Libertini in the G2 Premiere Stakes at Randwick.

Meanwhile, Mirage Dancer (GB) landed the Group 1 Metropolitan Handicap at Royal Randwick Racecourse on Saturday on a significant day in Australia for his breeders, Juddmonte Farms, and sire, Frankel (GB).

This victory represents the six-year-old’s breakthrough at Group 1 level, as well as a first success since showing early promise for his Australian connections when finishing a close 3rd in the Group 1 Caulfield Cup on his Southern Hemisphere debut last October.

Formerly trained in Britain by Sir Michael Stoute, Juddmonte Farms’ homebred was a familiar sight at the summer festivals. His crowning moment for Stoute was when he won the Group 3 Glorious Stakes at the Goodwood Festival by 3 ½ lengths from Group 2 winner and Group 1 placed Red Verdon.

Mirage Dancer’s performance on Saturday marks an 11th Group 1 winner for Frankel who, last month, reached 40 Group winners quicker than any other European sire in the history of the Pattern.

Frankel also secured Group 1 placings on Saturday with fellow Juddmonte-bred Finche (GB), who finished third in the Group 1 Turnbull Stakes at Flemington Racecourse, and Hungry Heart (GB), who placed second by a head in the Group 1 Flight Stakes at Randwick.