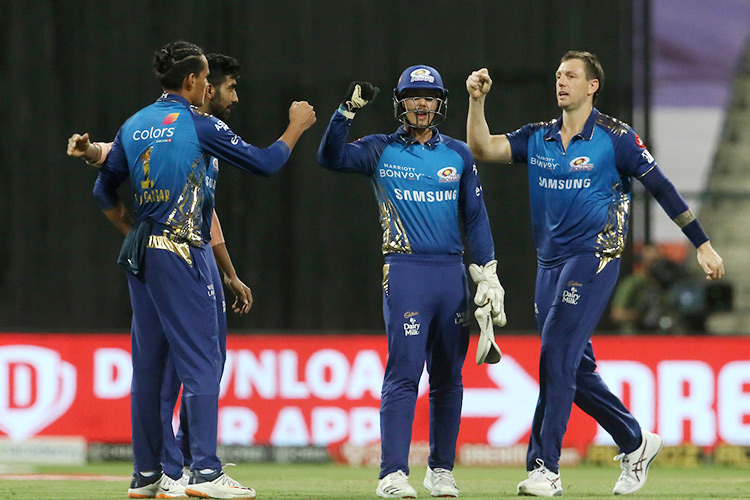 Riding on superb knocks by captain Rohit Sharma (70) and Kieron Pollard (47 n.o.), Mumbai Indians consigned a hapless Kings XI Punjab to their second straight defeat after notching up an easy 48-run win in their match played in Abu Dhabi on Thursday.

A late blitz by Pollard and Hardik Pandya saw Mumbai Indians surge to a huge total of 191/4 in their allotted 20 overs after being sent into bat before restricting Punjab to 143/8 in their reply.

Jasprit Bumrah triggered the collapse by breaking the dangerous-looking opening stand of 38 runs between Rahul and Agarwal. After the departure of Agarwal, no batsman other than Nicholas Pooran (44) could offer any resistance to the Mumbai bowlers and Punjab kept losing wickets at regular interval to wind up their innings 48 runs short.

Earlier, Pollard seemed to have picked up where he left in the last match against Royal Challengers Bangalore (RCB). He smashed a blitzkrieg 20-ball 47 with the help of three boundaries and four over the fence. The West Indian also shared an unbeaten 67-run stand for the fifth wicket with Hardik in just 3.5 overs. Hardik was also in a brutal mood as he slaughtered the Punjab bowling attack.

Capitalising on the good work earlier by their captain, both batsmen put the Punjab attack to the sword. They plundered the Punjab bowlers at will, hitting them all over the ground. Pollard’s last 32 runs came in just eight deliveries. Mumbai collected a whopping 26 runs off the last over bowled by Gowtham with the help of four sixes. It was Hardik, who sent the ball over the line off the first delivery before giving strike to Pollard with a single. Pollard then crashed all three balls well over the boundary ropes. Hardik’s unbeaten cameo of 30 runs off 11 deliveries comprised three fours and two sixes.

Meanwhile, Rohit played a brilliant knock to anchor the faltering innings after Mumbai got off to a stuttering start. He smashed a quick-fire 45-ball 70, adding 62 runs for the third wicket with last match hero Ishan Kishan, in nine overs as the duo put their innings back on track.

Rohit, who was caught superbly by Neesham off Shami, hit eight boundaries and three sixes.

Sharma and Surya Kumar Yadav took the score to 21 in four overs, playing cautiously.  A brilliant throw by Shami found Yadav short of his ground, pushing Mumbai on the backfoot.