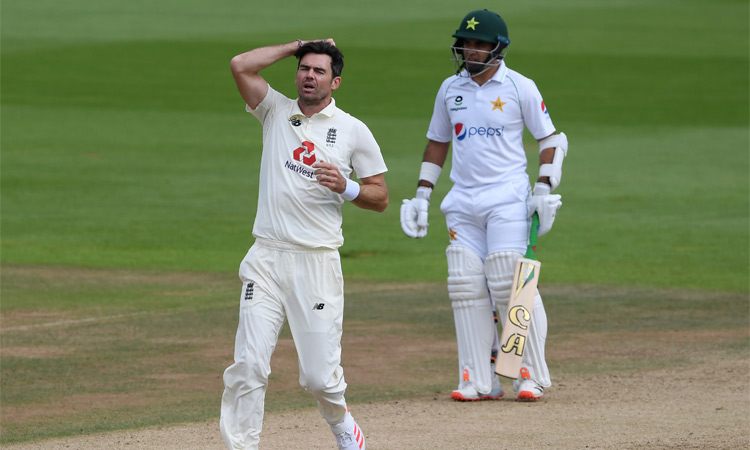 James Anderson reacts a after teammate Jos Buttler dropped a catch during the fourth day at the Ageas Bowl on Monday. AP

James Anderson's bid to become just the fourth bowler to take 600 Test wickets was hampered by yet another dropped catch on Monday as poor weather frustrated England in the series finale against Pakistan.

It was the fourth dropped catch in 37 balls off Anderson and the closest either he, or England, came to a wicket in the session in Southampton.

Pakistan were 41-0 after being made to follow on when rain stopped play at 1121 GMT and the players took an early lunch. 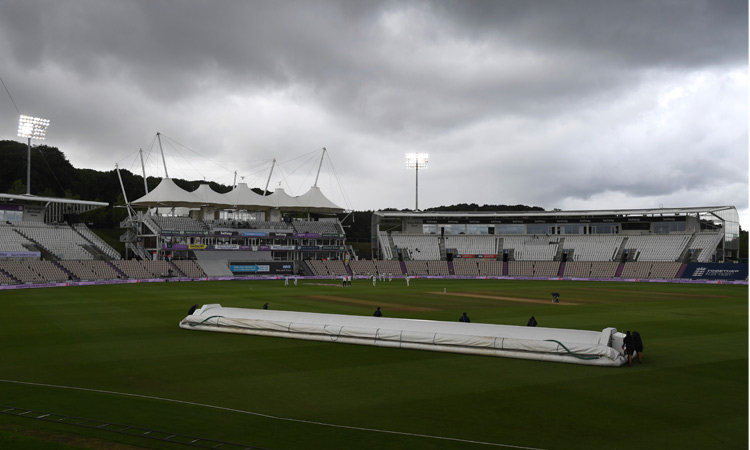 Dark clouds loom over as groundsmen pull on the covers after rain stopped play on the fourth day. AP

Masood was 13 not out and Abid Ali 22 not out, with Pakistan still 269 runs adrift of England's mammoth first innings 583-8 declared.

A huge downpour during the interval then threatened to keep the players off the field for several hours.

With more rain forecast for Tuesday and no certainty as to when England will next play a Test due to the coronavirus pandemic, Anderson could be left stranded on 598 Test wickets for some time yet.

England are 1-0 up in the three-match contest and will win their first Test series against Pakistan in a decade if they avoid defeat at the Ageas Bowl.

No paceman has yet reached the landmark figure of 600 Test wickets, with the only bowlers ahead of the 38-year-old Anderson in the all-time list a trio of retired spinners — Sri Lanka's Muttiah Muralitharan (800), Australia's Shane Warne (708) and India's Anil Kumble (619).

Anderson started the day in sight of joining the select group after taking 5-56— his 29th five-wicket haul in 156 Tests — during Pakistan's first-innings 273.

He might even have reached the landmark late on Sunday had not three catches been dropped off his bowling with the new ball.

And there was more frustration for Anderson when left-hander Masood, on three, edged an intended drive outside off-stump only for the ball to hit Buttler on the thigh as he failed to get his gloves to a chance far less difficult than several catches he held on Sunday.

England batsman Ollie Pope injured his shoulder chasing a ball to the boundary and was replaced by James Bracey, with the substitute fielder summing up the hosts' morning when his needless shy at the stumps led to four overthrows.

Pakistan resumed on Monday a huge 310 runs behind a total built on Zak Crawley's 267 and Buttler's 152. The pair shared an England fifth-wicket record stand of 359.

Pakistan captain Azhar Ali's superb 141 not out kept England at bay longer than looked likely after his side collapsed to 75-5 on Sunday.

Azhar found an ally in Mohammad Rizwan, with the wicketkeeper making 53 in a sixth-wicket stand of 138 with his skipper. 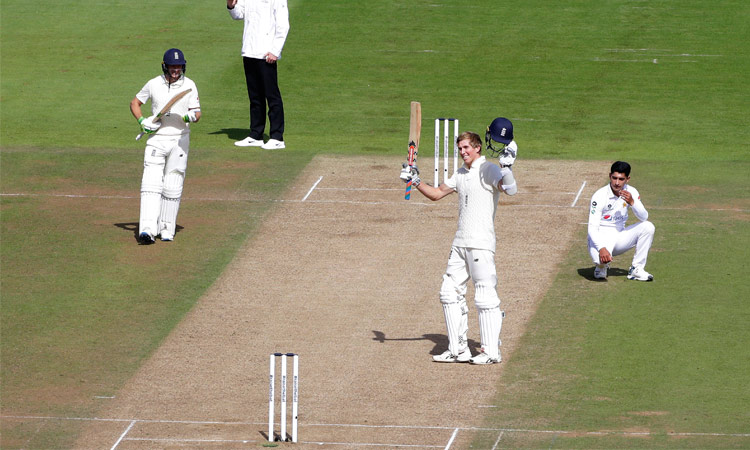