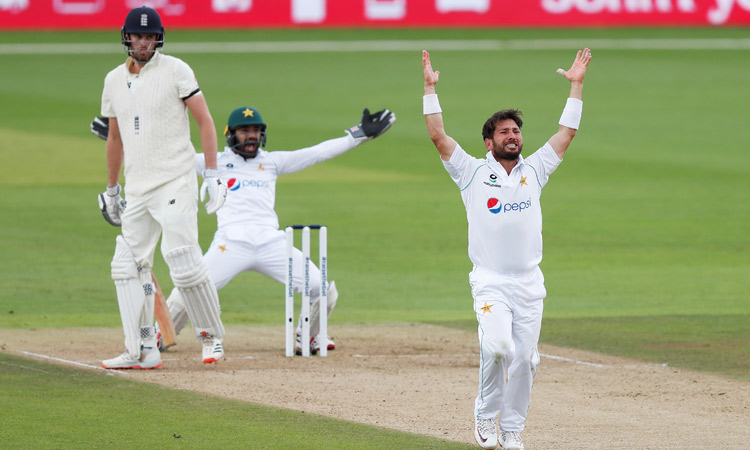 Zak Crawley hit his second successive fifty to take England to 91-2 at lunch on the first day of the third Test against Pakistan at Southampton on Friday.

England captain Joe Root, who won the toss, was 10 not out.

Root, with England needing to avoid defeat to secure a first series win over Pakistan in a decade at 1-0 up in a three-match campaign, decided to bat on a blustery morning where the sun was starting to break through the clouds.

England suffered an early setback when Rory Burns, in a tough series for openers, nicked a full-length delivery from fellow left-hander Afridi that moved away late, with Shan Masood holding a good low catch at fourth slip.

Burns stood his ground but replays confirmed it was a fair catch and he was out for six, the batsman now averaging a lowly five from four innings this series.

Crawley, fresh from his 53 in the second innings of the drawn second Test at Southampton, cut leg-spinner Yasir Shah for four and glanced paceman Naseem for another boundary.

And when Naseem was fractionally short, Crawley pulled him for a resounding four well in front of square.

But a second-wicket stand worth of 61 ended when Dom Sibley, going down the pitch to Yasir, was given out lbw for 22 following an impassioned appeal by the bowler.

Sibley reviewed but one of the lessons of this season is that a challenge to a decision by umpire Michael Gough rarely succeeds and, with tracking technology indicating the ball would have hit middle stump, England were 73-2.

Crawley then spent several deliveries stuck on 49 in the face of accurate Pakistan bowling before his patience was rewarded with a deserved fifty.

Left-arm seamer Curran had been brought into the side in place of Ben Stokes, with the star all-rounder missing the last two Tests of the series to be with his ill father in New Zealand.

"When Sam plays it obviously improves the batting, but we feel we've got the strength," Root told Sky Sports after winning the toss.

Pakistan were unchanged, with captain Azhar Ali saying: "It's a very important Test match for us. We want to give everything in this game."

This match marked the last of six scheduled Tests in the English season, which have all been played behind closed doors because of the coronavirus outbreak, with England defeating the West Indies 2-1 last month.

England are now set to play all of their planned 18 internationals, across all formats this season, despite the COVID-19 crisis.

Following the delays in the second Test, this match will see play allowed to start half an hour earlier than the scheduled 11:00am (1000 GMT) in a bid to make up for any overs lost to bad light.