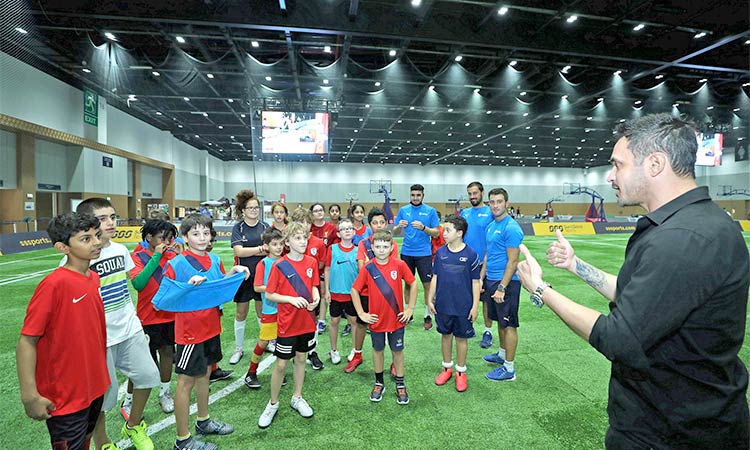 Former Italy and Inter Milan goalkeeper Walter Zenga and Brazilian futsal legend Falcao have saluted Dubai Sports Council (DSC) and Dubai World Trade Centre for the ‘amazing’ facilities at Dubai Sports World after visiting the teeming venue, which offers enthusiasts an opportunity to practice and play sports in a secure, safe and air-conditioned facility in the harshest part of the summer.

The halls have been buzzing with activity since DSW opened its doors just over a month ago, with a number of top sports academies - the LaLiga Academy, IFA Football Academy, It’s Just Football Academy, Tennis 360, G Force, Professional Sports Academy (PSA), Deepika’s Badminton Academy, Shooting Star, and Champs Ahead to name a few – offering summer training camps to enthusiastic children.

The pitches and courts are also available for group bookings, and DWTC has implemented several regulatory protective measures at the venue, in line with government guidelines to ensure the health and safety of all individuals and staff on the premises.

Visitors must check-in online via the DSW App prior to entry, while key onsite safety amenities and offerings include emergency medical services and regular sanitisation of the facility.

Additionally, all DSW entry points are equipped with thermal cameras to screen visitor temperatures with touch-free sanitiser equipment installed across the entire venue.

“It’s amazing here, because you can see the focus on safety as soon as you enter,” said Zenga, who is regarded as one of the best goalkeepers in the game, having made 58 appearances for the Italy national team, including the 1990 World Cup at home during which he set the World Cup record of five consecutive clean sheets.

As a professional player, he spent 16 years at Inter Milan and, post-retirement, he has managed teams in different leagues around the world, including Al Ain, Al Nasr and Al Shaab in the UAE.

“You get your temperature checked at the main entrance and you have sanitizers and signage everywhere,” added the Italian, who calls Dubai his home with his wife and kids based here for 10 years, even as he travels the world sharing his football knowledge.

“Dubai Sports World is amazing also because you find yourself in a place which offers you the opportunity to play so many different sports under one roof. Tell me one place in the world where you can go inside and play football, tennis, padel, volleyball, basketball… everything. If you take a look around, you will find such an amazing place only in Dubai.

“Dubai Sports Council have done an amazing job here and provided a great solution to improve football, improve sports and to invite kids to play sports.”

“Dubai Sports World is an amazing place,” he said. “It has so many different sports like football, tennis basketball and more, and everyone here is committed to applying health guidelines.

“The precautionary measures physical spacing, sterilization and temperature measurement is being applied exceptionally. I am really happy to visit Dubai Sports World and I want to come again.”