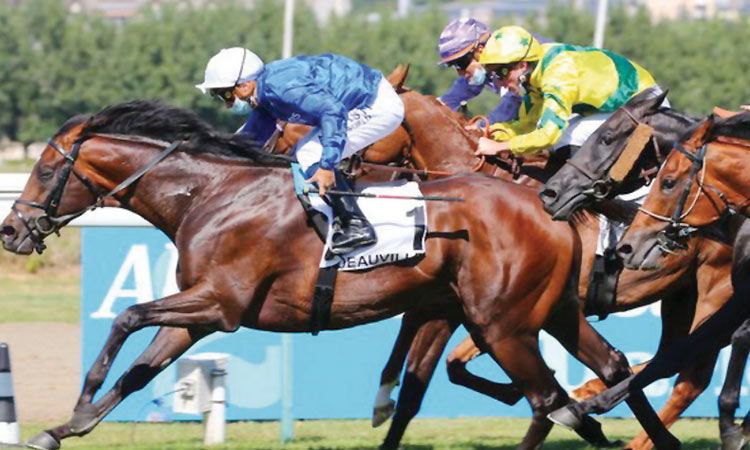 Three-year-old colt Well Of Wisdom recorded a third Listed victory in the Prix de Tourgeville over a mile at Deauville, France, on Sunday. The Charlie Appleby-trained cold under Mickael Barzalona battled gamely to win the race.

Earlier, Half Light continued her superb season when going down by three-quarters of a length to Watch Me in the G1 Prix Rothschild.

The Shamardal filly brought a progressive profile into the mile highlight, having won all three of her most recent starts for trainer Henri-Alex Pantall including a game display in the G3 Hamburger Stutenmeile in Germany on Sunday, July 12.

Half Light raced in fourth under Mickael Barzalona as Summer Romance (Charlie Appleby/William Buick) led the six-strong field at a good pace. Summer Romance was headed entering the final quarter-mile as Half Light, Know It All and Watch Me all quickened to dispute the running a furlong and a half out.

The trio forged clear inside the final furlong, with Half Light continuing to hold every chance until Watch Me asserted in the dying strides. The Godolphin four-year-old rallied bravely to edge out Know It All for second on the line.

Lisa-Jane Graffard of Godolphin said: “Half Light produced another fantastic performance and we are thrilled with her. She never runs a bad race and it was excellent work by her trainer to bring her back from Germany and get her fresh and ready for this.

“We will see how she comes out of today before deciding where we go from here, but everything she has done so far has been brilliant. She is by Shamardal and from the family of Galileo and Sea The Stars, so she has really exciting breeding potential for Godolphin.”

Alkandora continued her progressive profile when finishing third on her G3 debut in the Prix de Psyche.

The three-year-old filly, successful for trainer Andre Fabre in the Listed Prix Melisande at Longchamp on her previous outing, was awkward leaving the stalls and raced in sixth of the seven runners under Barzalona for the majority of the 10-furlong contest.

She quickened strongly down the inside rail passing the furlong-pole and briefly pressed for second half a furlong out before galloping out well to come home four and a quarter lengths behind impressive winner Raabihah.

Graffard of Godolphin said: “Alkandora ran another good race and is improving mentally all the time. Hopefully, she can find a Group race over further within her compass in the autumn.”

The Appleby-trained daughter of Invincible Spirit, an impressive all-the-way winner of a Newmarket maiden over the same distance on Saturday, 11 July, broke well and was sent to the front of the six runners by James Doyle.

Wedding Dance started to wind up the pace at the top of the straight and rallied when pressed on her outside by See The Rose with a furlong left. She stayed on after being headed approaching the final half-furlong, going down by three-quarters of a length.

Appleby said: “We were very pleased with Wedding Dance, who was beaten by a good filly in See The Rose. James Doyle said afterwards that he is confident that a mile will suit, so we will hopefully have a look at another Group race over that trip.”