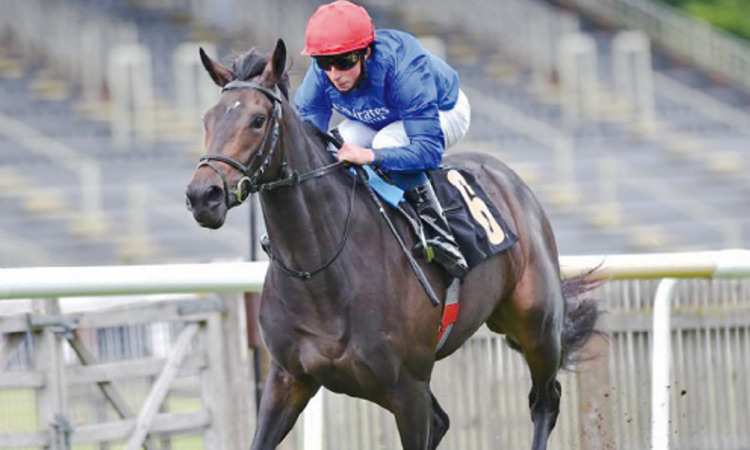 An impressive last-time-out winner Wedding Dance steps up to G3 company for the Prix Six Perfections over seven furlongs. File

Improving three-year-old Alkandora makes her G3 debut in the Prix de Psyche over a mile and a quarter at Deauville, France, on Saturday. The Andre Fabre-trained filly, who is ridden by Mickael Barzalona, finished a close second on her first two starts before staying on well to score by a nose in the Listed Prix Melisande over an extended 10 furlongs at Longchamp, France, on July 2.

Lisa-Jane Graffard of Godolphin said: “Alkandora is in good form and has done really well since her last race. She will appreciate a step up in trip in time, but Andre is very happy with her condition and she deserves a try at this level.”

The two-year-old filly quickened strongly when making all in a maiden over the same trip on Newmarket’s July course on July 11, having finished fourth on her debut in another seven-furlong maiden on Newmarket’s Rowley Mile course in June.

Charlie Appleby said: “We were very pleased with Wedding Dance last time out, when she won nicely, and she came out of the race well. This looks a nice opportunity for her to step up in grade.”

Ghostwatch (Charlie Appleby/James Doyle) also heads out to Deauville for the 15-furlong Listed Prix Carrousel on the back of an excellent run at Newmarket’s July Festival. The five-year-old, a Listed winner at Ascot in 2018, went down by half a length when finishing second in a valuable heritage handicap over 14 furlongs on July 10.

Three-year-old fillies Final Song and Althiqa aim for a first G3 success in the Oak Tree Stakes over seven furlongs at Goodwood on Friday.

Final Song (Saeed Bin Suroor/Jason Watson) was twice placed at G2 level last season and ran an excellent race to come home fourth in the G1 1,000 Guineas at Newmarket in June. She was denied a clear run when finishing a close sixth behind D’bai on her most recent outing in a seven-furlong conditions race at Haydock Park on July 17.

Althiqa (Charlie Appleby/William Buick) has won three of her four starts and makes her Group-race debut after staying on gamely for a short-neck verdict in the Listed Prix Amandine over the same distance at Deauville, France, on July 12.

Saeed Bin Suroor said: “Final Song was disappointing on her latest start but this looks the right race for her. She is in good order, has been working well and I am looking for a better result.”

Charlie Appleby said: “This is a harder assignment for Althiqa following her Listed win at Deauville but she deserves a crack at Group race. She goes there in good health off the back of a pleasing victory.”

Earlier,  Mohaather powered away from a strong field late in the final furlong to claim his maiden Group One victory in the Sussex Stakes at Glorious Goodwood.

The 3/1 second-favourite, ridden by Jim Crowley and trained by Marcus Tregoning, pounced to edge out Circus Maximus by three quarters of a length.

Favourite Siskin could only finish third, with 2,000 Guineas winner Kameko fourth after struggling to find a clear run in the home straight.

The four-year-old Mohaather had put a disappointing performance in the Queen Anne Stakes, won by Circus Maximus, behind him with victory in the Summer Mile at Ascot earlier this month.

It was a first top-level triumph for Tregoning since Sir Percy landed the Derby in 2006.

“He’s very impressive and if he’d got out earlier he’d have won easily -- he won easily anyway.”