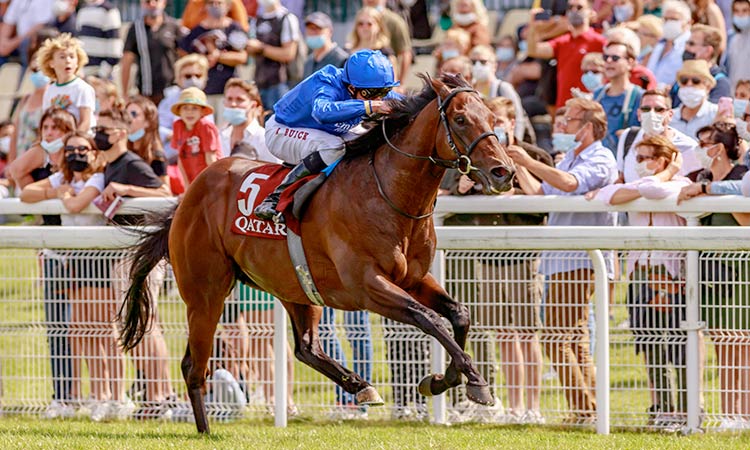 Pinatubo showcased the level of brilliance that made him the highest-rated juvenile in 25 years as he recorded a third G1 victory over seven furlongs in the Prix Jean Prat at Deauville, France, on Sunday.

The Shamardal colt captured both the Vincent O’Brien National Stakes and Darley Dewhurst Stakes during a stellar 2019 and was dropping back in trip following admirable efforts in defeat over a mile in the 2,000 Guineas and St James’s Palace Stakes.

Pinatubo was held up in third last as Well Of Wisdom (James Doyle) led the 11-strong field. He started to make stealthy headway between runners approaching the final quarter-mile and showed tremendous acceleration to take up the running with a furlong to race.

Lope Y Fernandez briefly looked set to lay down a challenge to Pinatubo inside the final furlong but the Godolphin homebred asserted in the closing stages to prevail by a cosy three-quarters of a length.

Charlie Appleby said: “This is what we saw from Pinatubo as a two-year-old. He travels and then has that electric turn of foot. William said that he was sat last at halfway with not a lot of room but, before he knew it, he was up there on the bridle again and travelling as well as he wanted to be in a race of this calibre.

“I am delighted for the horse and delighted for His Highness Sheikh Mohammed Bin Rashid Al Maktoum, Vice President, Prime Minister and Ruler of Dubai,, who has had a lot of faith in Pinatubo. Well done to the whole team because, when you get turned over in the first couple of races after being favourite for the Guineas over the winter, it is hard to take.

“We have always felt that Pinatubo is a very courageous horse. Take nothing away from the winners on his last two starts over a mile, they have outstayed us on the day, but we were always confident coming back to seven furlongs today that it would have to be a good horse to beat him. Most importantly, I am pleased for Pinatubo.

“Going back to a mile is something that we need to talk about. He does travel extremely well and has that acceleration. He is going to be one of those milers that you are going to have to ride with so much confidence and just hope that you get there.

“We will enjoy today. He is a multiple G1 winner at two and now a G1 winner at three, so I am delighted for everybody involved. His sire Shamardal had a fantastic year last year with his juveniles and this year with his three-year-olds, so it’s great for the team and well-deserved for this horse. He can have a little rest now and we can decide where we go next.”

William Buick said: “Charlie and His Higness Sheikh Mohammed always said that Pinatubo was one of the best horses they had ever seen and he is very fast, as he showed there. He ran very well over a mile in the 2,000 Guineas and very well in the St James’s Palace Stakes but he is very fast.

“When you ride him, he gives you a lot of confidence. He travels very well and is a very straightforward horse to ride. He has a very good mind and I don’t think I have ever ridden a horse with a turn of foot like he has.”

Meanwhile, unbeaten colt Earthlight picked up where he left off last season with an easy success in the six-furlong Listed Prix Kistena.

The Andre Fabre-trained son of Shamardal, making his first appearance since winning the G1 Middle Park Stakes at Newmarket, UK, in September, raced in a close sixth of the eight runners early on.

He cruised up to hit the front over a furlong from home and soon quickened away from the field under a hands and heels ride before being eased on the line by Mickael Barzalona to beat Wanaway by two and a half lengths.

Lisa-Jane Graffard of Godolphin said: “We are absolutely delighted with Earthlight and he won his race in the style we are accustomed to – he really showed his class. This will probably bring him on and I am sure that Andre Fabre and His Highness Sheikh Mohammed will have a discussion about the rest of his programme this year.”

Half Light maintained her rich vein of form with another tenacious victory in the G3 Hamburger Stutenmeile at Hamburg, Germany, on Sunday.

Making her Group-race debut in the mile contest, the Shamardal filly was covered up in a close sixth by Soufiane Saadi. She was switched down the inside after the cutaway at the top of the straight and stayed on gamely, collaring long-time leader Song Of Life with half a furlong left before going away to win by a length and a half.

It was a third straight win for the four-year-old, who had previously captured a conditions race and the Listed Prix Urban Sea for Henri-Alex Pantall in France.

Soufiane Saadi said: “Henri-Alex Pantall told me that I had to wait a little bit with Half Light in the middle of the race. I went on the inside in the straight and it was easy with this filly. I think she can go for better races now, whether it’s in France or Germany.”